How Machine Learning Could Transform Psychiatry

Researchers from the University of Colorado at Boulder are working to apply machine learning to psychiatry, with a speech-based mobile app that can categorize a patient's mental health status as well as or better than a human can. "We are not in any way trying to replace clinicians. But we do believe we can create tools that will allow them to better monitor their patients," Thanks to advances in artificial intelligence, computers can now assist doctors in diagnosing disease and help monitor patient vital signs from hundreds of miles away. Nearly one in five U.S. adults lives with a mental illness, many in remote areas where access to psychiatrists or psychologists is scarce. Others can't afford to see a clinician frequently, don't have time, or can't get in to see one.

Fox News Flash top headlines for Dec. 31 are here. Check out what's clicking on Foxnews.com One day after Colorado and western Nebraska counties reported a series of mysterious, nocturnal drone flights, the Federal Aviation Administration is promoting a rule change last week that requires most drones to be identifiable remotely, a report said Monday. The rule change, announced Thursday, have been in works for more than a year, FAA spokesman Ian Gregor said in an email to the Denver Post Monday. Under the legislation, law enforcement, federal security agencies and the FAA would be allowed to identify drones flying through their jurisdiction, the FAA said.

Fox News Flash top headlines for Dec. 30 are here. Check out what's clicking on Foxnews.com A squadron of drones flying over the Midwest every night for nearly two weeks have left both residents and officials wondering who's flying them and what purpose they are serving, a report said Sunday. In the past week, three more rural counties have experienced nightly flyovers from the northeast corner of Colorado to at least one county in neighboring Nebraska, the Denver Post reported. Sheriffs in Lincoln, Washington and Sedgwick counties say their offices have been inundated with calls this week about the devices, the newspaper reported.

Gay: As an astronomer, I have to admit, my day-to-day life is sitting at home writing software to help us better understand our universe. Then, as a communicator of science, it just makes me so excited to come out here and tell you about the kind of stuff I get to do. As an astronomer, I use data; images, spectra, photos but taken with cameras that are sometimes orbiting our world and other planets, moons, asteroids. For a lot of my career, everything I wanted to study, everything I wanted to learn, I could do with software, a database, and sometimes some really clumsy-linked lists because that was C in the 90s. Along the way though, I got curious about all these other areas of science that are different from mine. It was from the planetary-science community where I've somehow migrated over the years that I learned there are people - such as the folks who are today mapping out planet classic Pluto - that the way they do their analysis of the geological features on this world are to sit around round tables with a screen and a Wacom tablet. They draw by hand what they perceive to be the boundaries between different kinds of glaciers, different kinds of mountains, different features on this distant world. This is science by hand because humans and software don't know what to make of Pluto but the humans can at least guess. There's a lot of science that works this way. One of the most disturbing things I learned is there is a brilliant scientist Stuart Robbins who, as his PhD work at the University of Colorado, drew three million circles - again, with a Wacom tablet; go Wacom - three million circles on thousands and thousands of images of the surface of Mars. This ended up leading to a catalog of 600,000 craters. The reason he had to draw so many circles is he had to periodically remap regions to make sure that his bias hadn't changed over time. He had to map things at small scales, at big scales, at in-between scales, bridge across all of these, have overlapped between his image. Three million circles got him a PhD.

In 2003, CU student Nate Seidle fried a power supply in his dorm room and, in lieu of a way to order easy replacements, decided to start his own company. Since then, SparkFun has been committed to sustainably helping our world achieve electronics literacy from our headquarters in Boulder, Colorado. No matter your vision, SparkFun's products and resources are designed to make the world of electronics more accessible. In addition to over 2,000 open source components and widgets, SparkFun offers curriculum, training and online tutorials designed to help demystify the wonderful world of embedded electronics. We're here to help you start something.

At the 2019 Supercomputing Conference in Denver, Colorado, global supercomputer leader Cray, a Hewlett Packard Enterprise company, announced that the King Abdullah University of Science and Technology (KAUST) in Saudi Arabia has selected a Cray CS-Storm 500NX supercomputer to support innovation in the university and the nation through a strategic artificial intelligence (AI) initiative. The added power of the GPU-accelerated CS-Storm system provides KAUST researchers greater computational capabilities to drive positive and significant outcomes in the university's core research areas of global significance: food, water, energy, the environment, and digitalization. From helping to build smart cities to developing AI algorithms that think like scientists, KAUST is the largest research center in the Middle East that brings together faculty, researchers and graduate students to leverage the interconnectedness of science and engineering. With an 8:2 ratio of GPUs to CPUs, the new Cray CS-Storm 500NX supercomputer will meet KAUST's most demanding computing requirements for production scalability, while also delivering a low total cost of ownership. Engineered for the convergence of modeling, simulation and analytics, the CS-Storm fast-started KAUST's AI journey and provides researchers and scientists the highly-advanced supercomputing and software capabilities required to analyze large volumes of data for rapid insight, where simulation alone is unsatisfactory for predicting real-world outcomes.

You Look Like a Thing and I Love You: A quirky investigation into why AI does not always work

Book review Everyday AI has the approximate intelligence of an earthworm, according to Janelle Shane, a research scientist at the University of Colorado but better known as an AI blogger. Since AI is both complicated and massively hyped, and therefore widely misunderstood, her new book is a useful corrective. You Look Like a Thing and I love You is both funny and annoying. It is based partly on content from the author's AI Weirdness blog, where she recounts what happens when you use artificial intelligence for unusual purposes. Examples include creating chat-up lines (one result being the title of the book), writing recipes, telling jokes, sorting tasty sandwiches from disgusting ones, or creating robots for crowd control.

A major wildfire spread through Colorado, and I spent long hours locating shelters, identifying evacuation routes and piecing together satellite imagery. As the Fourmile Canyon Fire devastated areas to the west of Boulder, ultimately destroying 169 homes and causing $217 million in damage, my biggest concerns were ensuring that people could safely evacuate and first responders had the best chance of keeping the fire at bay. I spent it sitting comfortably in my home in Bloomington, Indiana, a thousand miles away from the action. I was a volunteer, trying to help fire victims. I had created a webpage to aggregate data about the fire, including the location of shelters and the latest predictions of fire spread. 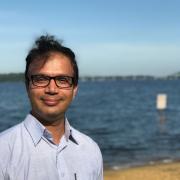 Mainali's expertise is already being shared outside of the Chesapeake Bay watershed, including a project concerning water flow management in Colorado in an area where water is a scarce resource. To help manage the demands of water for agriculture and wildlife, Mainali wrote algorithms that optimize the water flow and release from reservoirs by various agencies. These algorithms will be used for informed decision making about sharing the responsibility of water release from multiple reservoirs on a daily basis.