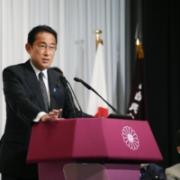 Asian security experts have welcomed the victory by Prime Minister Fumio Kishida's ruling coalition in Sunday's House of Councilors election, saying Japan's political stability and leadership are vital for shoring up a rules-based international order being challenged by countries such as China and Russia. Citing Russia's aggression in Ukraine, China's increased assertiveness in the Indo-Pacific and North Korea's nuclear and missile development, the experts either expressed support for or did not oppose Kishida's calls for boosting Japan's defense capabilities and amending the Constitution, including adding a reference to the Self-Defense Forces in the war-renouncing Article 9. This could be due to a conflict with your ad-blocking or security software. Please add japantimes.co.jp and piano.io to your list of allowed sites. If this does not resolve the issue or you are unable to add the domains to your allowlist, please see this support page.

When the going gets tough for Kim Jong Un, his regime likes to turn its TV cameras on the military, with glossy productions showcasing the missiles and manpower that North Korea tells the masses are protecting the nation. Since taking power a decade ago, Kim has brought new looks to state television, including drone footage, computer graphics, music video-style cuts and made-for-TV moments. This has helped him rally support for the state as it battles chronic food shortages and an anemic economy made even weaker by international sanctions imposed as punishment for testing nuclear bombs and missiles, some potentially capable of striking the U.S. and its allies. In his most recent state TV spectacle, for a weapons test on March 24, Kim is seen in dark sunglasses and a black leather jacket apparently ordering his army -- in slow motion -- to fire an intercontinental ballistic missile. This was released eight days after a failed ballistic missile launch near Pyongyang's international airport.

Open AI gets GPT-3 to work by hiring an army of humans to fix GPT's bad answers. Interesting questions involving the mix of humans and computer algorithms in Open AI's GPT-3 program

The InstructGPT research did recruit 40 contracters to generate a dataset that GPT-3 was then fine-tuned on. But I [Quach] don't think those contractors are employed on an ongoing process to edit responses generated by the model. A spokesperson from the company just confirmed to me: "OpenAI does not hire copywriters to edit generated answers," so I don't think the claims are correct." So the above post was misleading. I'd originally titled it, "Open AI gets GPT-3 to work by hiring an army of humans to fix GPT's bad answers." I changed it to "Interesting questions involving the mix of humans and computer algorithms in Open AI's GPT-3 program." I appreciate all the helpful comments! Stochastic algorithms are hard to understand, especially when they include tuning parameters. I'd still like to know whassup with Google's LaMDA chatbot (see item 2 in this post).

Recent developments in artificial intelligence (AI) and computer vision have resulted in the ability to create'fake people.' These people are either generated entirely from scratch by an AI or are made by digitally altering the appearance of actors that appear similar to them. A movement called RepresentUS recently tried to publish deep fake advertisements on several news outlets such as CNN and Fox News. The advertisements depicted Russian President Vladimir Putin and North Korean leader Kim Jong-un, both stating that Americans need to act in order to protect their democracy. The news station did not let these advertisements run and took them down shortly before being posted.

Chatbots: Still Dumb After All These Years

In 1970, Marvin Minsky, recipient of the Turing Award ("the Nobel Prize of Computing"), predicted that within "three to eight years we will have a machine with the general intelligence of an average human being." The fundamental roadblock is that, although computer algorithms are really, really good at identifying statistical patterns, they have no way of knowing what these patterns mean because they are confined to MathWorld and never experience the real world. It's a brown-throated thrush, but in Germany it's called a halsenflugel, and in Chinese they call it a chung ling and even if you know all those names for it, you still know nothing about the bird–you only know something about people; what they call that bird. Now that thrush sings, and teaches its young to fly, and flies so many miles away during the summer across the country, and nobody knows how it finds its way," and so forth. There is a difference between the name of the thing and what goes on.

The United States Treasury slapped sanctions on 25 individuals and entities on Friday, citing human rights abuses, and blacklisted a Chinese maker of artificial intelligence (AI) facial recognition software, citing its role in the repression of Muslim Uighurs and other religious and ethnic minorities in Xinjiang. In addition to China, Friday's raft of sanctions targeted people and entities linked to human rights abuses in Myanmar, North Korea and Bangladesh. Canada and the United Kingdom joined the US in announcing sanctions over repression in Myanmar. "On International Human Rights Day, Treasury is using its tools to expose and hold accountable perpetrators of serious human rights abuse," said Deputy Secretary of the Treasury Wally Adeyemo in a statement posted on the department's website. Treasury added AI firm SenseTime Group Limited to a list of Chinese blacklisted firms for developing facial recognition programmes "that can determine a target's ethnicity, with a particular focus on identifying ethnic Uyghurs".

The Dark Side of A.I.

Seoul – A toy-like robot with scowling blue eyes and a North Korean flag across its chest roams around a classroom at a university in Pyongyang in a recent demonstration of tools aimed at helping children learn basic math, music and English. The footage, broadcast by North Korean state television KRT, also showed two other larger plastic robots, each with a vaguely humanoid appearance. North Korean leader Kim Jong Un has been pushing for education reform in recent years by spurring technological and scientific innovation. "I help teach educational technology that enhances children's intelligence," said the 80-centimeter (31.5 inches) tall robot in a female voice, waving its arms. A second robot featured a smiley face on a screen embedded inside a white round head, while another wore a blue plastic suit and white-rimmed glasses, the KRT footage showed.

Andrew Ng Announces Data-Centric AI Competition Winners. Who Are They?

DeepLearning.AI's Andrew Ng has announced the winners for the Data-Centric AI competition. Under the category of Most Innovative, the winners included Mohammad Motamedi, Johnson Kuan and the GoDataDriven group Part of Xebia. Andrew Ng also gave honourable mentions to Pierre-Louis Bescond and KAIST-AIPRLab (Youngjune Lee, Oh Joon Kwon, Haeju Lee, Joonyoung Kim, Kangwook Lee). As only less than 10K images were allowed, participants had to focus on getting "Good Data" in the absence of "Big Data". Andrew NG feels that this phenomenon is very common in AI applications for more traditional industries.

It is not the first time Musk has made frightening predictions about the potential of artificial intelligence -- he has, for example, called AI vastly more dangerous than North Korea -- and he has previously called for regulatory oversight.