US military face recognition system could work from 1 kilometre away

The US military is developing a portable face-recognition device capable of identifying individuals from a kilometre away. The Advanced Tactical Facial Recognition at a Distance Technology project is being carried out for US Special Operations Command (SOCOM). It commenced in 2016, and a working prototype was demonstrated in December 2019, paving the way for a production version. SOCOM says the research is ongoing, but declined to comment further. Initially designed for hand-held use, the technology could also be used from drones.

Drones are causing airport chaos - why can't we stop them?

For the second time in less than a month, suspected drone sightings have shut down a UK airport. On 8 January flights out of London Heathrow were suspended for over an hour. And between 19 and 21 December, more than 140,000 people at London Gatwick had their travel plans disrupted after drones were spotted above the airport. How can drones cause so much disruption? Airports operate on a just-in-time basis, with Heathrow moving a plane onto or off its runways every 45 seconds on average. 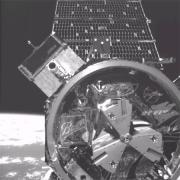 As if engaged in a slow-motion dance, two mated satellites used a robot arm to draw apart, then come together again several hours later on Monday. It is the first step towards the mission's ultimate goal of separating completely and docking with each other autonomously from a distance of 7 kilometres away. The $300-million Orbital Express mission – run by the US Defense Advanced Research Projects Agency (DARPA) – uses two satellites. One, called ASTRO (Autonomous Space Transport Robotic Operations), is designed to dock with and test repairs on another, called NextSat. The 90-day mission is meant to test autonomous operations in a spacecraft so that one day, a fix-it satellite might be deployed to fuel, inspect or even repair a wounded satellite without help from human controllers.

Meet Alrobot, the remote-controlled robotic tank being used by the Iraqi army to fight ISIS

The Iraqi army is testing its latest weapon in the fight against ISIS, a remote-controlled battle robot. The unmanned vehicle has a heavy machine gun turret for taking out targets picked out by the controller. Called Alrobot, the bullet-proof vehicle is being tested in the Iraqi desert as part of the army's efforts to retake the city of Mosul from ISIS. Iraq is preparing a remote controlled attack vehicle being which experts say could be used in the fight to retake the city of Mosul from Isis. Reports indicate the remote controlled vehicle, called'Alrobot', was designed by two brothers in Baghdad.