MEP: Public has a 'right to know' about Commission's lie detector tech

The European Commission is being urged to publish reports on the trials of an Artificial Intelligence lie detector technology, iBorderCTRL, which has been bankrolled by the EU's long-term research and development funding mechanism, Horizon 2020. Green MEP Patrick Breyer, who is currently embroiled in a legal battle with the Commission's Research Agency for its refusal to disclose ethical assessments of the iBorderCTRL system, said on Tuesday (31 March) that the executive is also refusing to publish information on trials that have been conducted for the technology. The iBorderCTRL system has been tested on various frontiers throughout the EU and uses advanced artificial intelligence technologies to analyse micro-expressions. One of its uses is to detect whether a user is lying or not, when presented with a series of questions, in what has been termed'deception detection.' As part of the trials of the technology, MEP Breyer had sought out information on this component of iBorderCTRL and the proportion of'false positives' that had been identified by the system, following an investigation by The Intercept, which found that the technology made several errors, incorrectly identifying four out of sixteen honest answers as false.

Beyond Europe's AI Strategy: Global Governance for the Fourth Industrial Revolution Carolina Polito* On 19 February 2020, the European community welcomed the publication of three new documents that will drive the European Digital Agenda for the five years of the new von der Leyen's presidency. The documents are the European data strategy, the White Paper on Artificial Intelligence and the Report on Safety and Liability implications of AI, the Internet of Things and Robotics.[1] Together, these documents offer a comprehensive overview of European priorities for the Fourth Industrial Revolution. The main objective underpinning the European data strategy, informed by the conviction that the value of data lies in its pooling and storage, is the creation of a single European data space in which information flows freely and safely. To accomplish this objective, the EU will establish mechanisms to improve how data is shared, including via common contractual obligations on presentation, so as to make it accessible across member states.

How Governments Have Used AI to Fight COVID-19

Anton Dolgikh leads AI and ML-oriented projects in the Healthcare and Life Sciences practice at DataArt and runs educational and training developers focused on solving business problems with ML methods. Prior to working at DataArt, Dolgikh worked in the Department of Complex Systems at the Université Libre de Bruxelles, a leading Belgian private research university. What was it that originally inspired you to pursue AI and life sciences as a career? I always like to read. At university, I discovered a new source of information – articles.

The European Commission has recognized the potential of Artificial Intelligence (AI), not only from a technical perspective but also and foremost for its potential role as enabler in the achievement of the Sustainable Developments Goals and in the European Green Deal objectives. NGIoT is holding a webinar to consider and discuss AI deployment. The aims of the webinar are to understand the main issues arising from the data protection framework, and to address issues of trust needed to use and share knowledge when talking about AI technologies. All who are interested (or just curious) are encouraged to participate and engage to better understand the state of play of AI, and to contribute ideas to reinforce a progressive view in the European dimension.

EETimes - How Do You Protect Your Machine Learning Investment? - 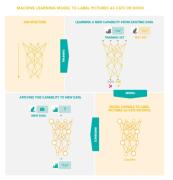 Manufacturers and suppliers commonly offer maintenance contracts to companies who purchase operation-critical equipment. A preventative maintenance application based on a machine learning (ML) model can be used to help avoid failures that could impact business. To build the model, the manufacturer or supplier must spend time, money, and effort. However, to eliminate the costs of a maintenance contract, the customer could duplicate the model and manage the maintenance without the supplier's assistance. To build a machine learning (ML) model for maintenance, an appropriate training set must be collected and labeled; the architecture and training parameters must be chosen for optimal accuracy–speed trade-offs for the algorithm; and computing time is required to train it.

Currently, the European Union does not have any specific legislative instrument or standard to regulate the use and development of AI. However, these requirements are likely to set the stage for future legislation, similar in scope and effect as the General Data Protection Regulation (GDPR) for privacy, therefore indicating that the European Union may be on the cusp of providing for specific and unique AI regulatory legislation.

On February 19, 2020, the European Commission presented its White Paper on Artificial Intelligence – A European Approach to Excellence and Trust, a much-anticipated policy document setting out concrete measures and proposed regulation with the objective of promoting the development, uptake and use of AI applications, while also addressing the resulting fundamental rights challenges. The document has raised concerns among companies about whether new rules on AI will negatively impact businesses developing or deploying AI solutions across the EU. Feedback on the white paper can be provided until May 19, 2020. The white paper proposes a dual approach. It aims to establish an "ecosystem of excellence" on the one hand, and "an ecosystem of trust" on the other hand.

Artificial intelligence is finally taking off. Why now, and how are businesses using it? What are the challenges to implementation? In this white paper, we explore AI trends, the importance of choosing the right tools, and how to strategically deploy people in your tech-and-human stack.

The White Paper on Artificial Intelligence (the "AI White Paper"), recently released by the European Commission, provides the clearest indication yet that the EU is seriously considering regulating the development and deployment of artificial intelligence ("AI"). If adopted, the Commission's proposals would likely increase the already significant compliance burden imposed on technology-focused and technology-dependent businesses operating in the EU, and may lead to significantly divergent practices between the EU and the rest of the world. It is evident from the text of the AI White Paper that the Commission considers that its proposals would help to establish the EU at the centre of global AI technology development and deployment, and to encourage investment in the EU in this space, although it is not entirely clear that a lack of additional regulation is currently holding the EU back. The AI White Paper charts a rough course for the potential future regulation of AI technologies in the EU. It will require much greater detail and refinement before it can realistically progress to full-blown legislation.

Europe sets out to build its own brand of AI

Just look at the reports on AI. When I asked one expert last week how many of these documents are out there, she said at least 120. The von der Leyen Commission's much anticipated White Paper dropped on February 19th. It follows the statement on AI in her own political guidelines, and the previous Commission's Communication on Artificial Intelligence for Europe from last spring. And it's accompanied by the Commission's Report on the safety and liability implications of Artificial Intelligence, the Internet of Things and robotics.