Blender Bot -- Part 3: The Many Architectures

We have been looking into Facebook's open-sourced conversational offering, Blender Bot. In Part-1 we went over in detail about the DataSets used in the pre-training and fine-tuning of it and the failure cases as well as limitations of Blender. And in Part-2 we studied the more generic problem setting of "Multi-Sentence Scoring", the Transformer architectures used for such a task and learnt about the Poly-Encoders in particular -- which will be used to provide the encoder representations in Blender. In this 3rd and final part, we return from our respite with Poly-Encoders, back to Blender. We shall go over the different Model Architectures, their respective training objectives, the Evaluation methods and performance of Blender in comparison to Meena.

One of the main tasks in argument mining is the retrieval of argumentative content pertaining to a given topic. Most previous work addressed this task by retrieving a relatively small number of relevant documents as the initial source for such content. This line of research yielded moderate success, which is of limited use in a real-world system. Furthermore, for such a system to yield a comprehensive set of relevant arguments, over a wide range of topics, it requires leveraging a large and diverse corpus in an appropriate manner. Here we present a first end-to-end high-precision, corpus-wide argument mining system. This is made possible by combining sentence-level queries over an appropriate indexing of a very large corpus of newspaper articles, with an iterative annotation scheme. This scheme addresses the inherent label bias in the data and pinpoints the regions of the sample space whose manual labeling is required to obtain high-precision among top-ranked candidates. 1 Introduction Starting with the seminal work of Mochales Palau and Moens (2009), argument mining has mainly focused on the following tasks - identifying argumentative text segments within a given document; labeling these text segments according to the type of argument and its stance; and elucidating the discourse relations among the detected arguments. Typically, the considered documents were argumentative in nature, taken from a well defined domain, such as legal documents or student essays. More recently, some attention had been given to the corresponding retrieval task - given a controversial topic, retrieve arguments with a clear stance towards this topic. This is usually done by first retrieving - manually or automatically - documents relevant to the topic, and then using argument mining techniques to identify relevant argumentative segments therein. This documents-based approach was originally explored over Wikipedia (Levy et al. 2014; Rinott et al. 2015), and more recently over the entire Web (Stab et al. 2018). This approach is most suitable for topics of much controversy, where one can find documents directly addressing the debate, in which relevant argumentative text segments are abundant.Copyright c null 2020, Association for the Advancement of Artificial Intelligence (www.aaai.org).

Optimizing storage assignment is a central problem in warehousing. Past literature has shown the superiority of the Duration-of-Stay (DoS) method in assigning pallets, but the methodology requires perfect prior knowledge of DoS for each pallet, which is unknown and uncertain under realistic conditions. In this paper, we introduce a new framework that accounts for such uncertainty using a novel combination of convolutional and recurrent neural network models, ParallelNet. Through collaboration with a large cold storage company, we demonstrate ParallelNet achieves a 10% decrease in MSLE and 29% decrease in MAPE compared to CNN-LSTM on unseen future shipments, and suffers less performance decay as time increases. The framework is then integrated into a first-of-its-kind Storage Assignment system, which is being piloted in warehouses across the country.

Providing systems the ability to relate linguistic and visual content is one of the hallmarks of computer vision. Tasks such as image captioning and retrieval were designed to test this ability, but come with complex evaluation measures that gauge various other abilities and biases simultaneously. This paper presents an alternative evaluation task for visual-grounding systems: given a caption the system is asked to select the image that best matches the caption from a pair of semantically similar images. The system's accuracy on this Binary Image SelectiON (BISON) task is not only interpretable, but also measures the ability to relate fine-grained text content in the caption to visual content in the images. We gathered a BISON dataset that complements the COCO Captions dataset and used this dataset in auxiliary evaluations of captioning and caption-based retrieval systems. While captioning measures suggest visual grounding systems outperform humans, BISON shows that these systems are still far away from human performance.

Under the hood: Facebook Marketplace powered by artificial intelligence

Facebook Marketplace was introduced in 2016 as a place for people to buy and sell items within their local communities. Managing the posting and selling of that volume of products with speed and relevance is a daunting task, and the fastest, most scalable way to handle that is to incorporate custom AI solutions. On Marketplace's second anniversary, we are sharing how we use AI to power it. Whether someone is discovering an item to buy, listing a product to sell, or communicating with a buyer or seller, AI is behind the scenes making the experience better. In addition to the product index and content retrieval systems, which leverage our AI-based computer vision and natural language processing (NLP) platforms, we recently launched some new features that make the process simpler for both buyers and sellers. 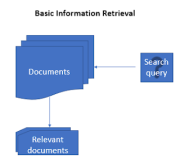 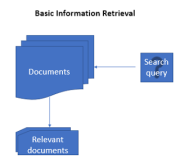 In this post, we learn about building a basic search engine or document retrieval system using Vector space model. This use case is widely used in information retrieval systems. Given a set of documents and search term(s)/query we need to retrieve relevant documents that are similar to the search query.

Modern retrieval systems are often driven by an underlying machine learning model. The goal of such systems is to identify and possibly rank the few most relevant items for a given query or context. Thus, such systems are typically evaluated using a ranking-based performance metric such as the area under the precision-recall curve, the $F_\beta$ score, precision at fixed recall, etc. Obviously, it is desirable to train such systems to optimize the metric of interest. In practice, due to the scalability limitations of existing approaches for optimizing such objectives, large-scale retrieval systems are instead trained to maximize classification accuracy, in the hope that performance as measured via the true objective will also be favorable. In this work we present a unified framework that, using straightforward building block bounds, allows for highly scalable optimization of a wide range of ranking-based objectives. We demonstrate the advantage of our approach on several real-life retrieval problems that are significantly larger than those considered in the literature, while achieving substantial improvement in performance over the accuracy-objective baseline.

Linear Submodular Bandits and their Application to Diversified Retrieval

Diversified retrieval and online learning are two core research areas in the design of modern information retrieval systems. In this paper, we propose the linear submodular banditsproblem, which is an online learning setting for optimizing a general class of feature-rich submodular utility models for diversified retrieval. We present an algorithm, called LSBGREEDY, and prove that it efficiently converges to a near-optimal model. As a case study, we applied our approach to the setting of personalized news recommendation, where the system must recommend small sets of news articles selected from tens of thousands of available articles each day. In a live user study, we found that LSBGREEDY significantly outperforms existing online learning approaches.