Apple cares a lot about music. Steve Jobs loved it so much that he invented the iPod and iTunes to let us bring all of it everywhere, and personally owned multi-thousand-dollar Swedish speakers in his sparsely-decorated living room. To this day, Apple Music is one of the best-sounding streaming services you can subscribe to thanks to lossless audio support. The headphones it makes, both itself and via Beats, are largely fantastic. It's a shame, then, that the company still fails to make a great full-size smart speaker.

Chief national security correspondent Jennifer Griffin reports that the U.S. will only shoot down the Chinese spy balloon if officials can assure zero civilian casualties. U.S. investors were involved in at least 37% of all investment transactions in China's artificial intelligence, or AI, sector between 2015 and 2021, according to a new report. Georgetown University's Center for Security and Emerging Technology found that $40.2 billion of the total money raised by all Chinese AI companies over this time period had U.S. backing. However, the center couldn't determine what percentage of that amount came from U.S. investors or investors abroad. The money went to 251 Chinese AI companies, and 91% of the U.S. investment came as venture capital to earlier-stage businesses.

Blueprints for a dream: the new age of virtual architecture

"Something big is happening," says Hamza Shaikh. "Architecture is entering a new age." The ways in which buildings are imagined and communicated are, he argues, being transformed by a combination of social media and the ever-evolving techniques of digital drawing, to which artificial intelligence is adding new capabilities. And indeed, if it is not yet clear how blocks of flats or schools or shopping centres near you might be changed by this revolution, the energy and invention behind it are undeniable. There is also, as Shaikh justifiably claims, a social transformation.

If you have an Amazon Echo device in your home, you most likely use it for everyday uses, such as listening to music or checking the news. However, there are a range of interesting things Alexa can also do. Once you know what to ask, you can put your Alexa to the test and ask her to supply you with hilarious jokes, pop culture references, trivia, and much more. These hidden features will certainly not leave users disappointed and are worth giving a go. Here is a list of 15 questions you can ask Alexa to lighten the mood or to tackle your boredom.

CapsuleAI's Orca automates accurate Gameplay Review to better detect cheating and future-proof against Machine Learning (ML) cheats. This frees up game devs to spend their time where they really want - making great games! Let's see how it works Orca cheat detection analyses player behaviour to determine whether cheating has occurred. Detecting cheats in this way completely avoids considering the cheat mechanism, because the result of using a cheat will be observable, regardless of how it is implemented. Traditional anti-cheat, on the other hand, works by tackling specific mechanisms which enable cheating.

The Beginner's Guide to Understanding Data Science and Machine Learning

We are on the brink of a massive technological revolution as we slowly move from the water and steam-powered first industrial revolution to the artificial intelligence-powered fourth industrial revolution. The theories backing data science and machine learning have existed for hundreds of years. There used to be times when proto-computers would take almost forever to compute a billion calculations. No one dared think of artificial intelligence or related technology. All thanks to machine learning and data science, we can now calculate data at a capacity of 5 billion calculations per second.

Google vs Open AI: How the search giant will take on ChatGPT

But exactly how does Google plan to roll out its own AI chatbot, especially LaMDA, which has been limited beta testing for a while now. Let's take a look at what we know so far about Google's own approach to AI, and why it could go big on this in 2023. Anthropic is not Google's first big-ticket investment in artificial intelligence technologies. In 2014, Google's parent company, Alphabet acquired British AI laboratory DeepMind. DeepMind is known for, among other things, developing the AlphaGo program that beat world champion Go player Lee Sedol in 2016; AlphaZero, which was able to defeat seasoned chess programs like Stockfish; and AlphaFold, which predicted the shape of nearly all proteins known to science.

Revolutionizing Game Design and Development: The Power of AI in the Gaming Industry

AI-generated game worlds: AI algorithms can be used to procedurally generate game worlds, creating unique and dynamic environments for players to explore. This can help reduce the time and resources required for manual world-building and allow for more diverse and intricate game worlds. Adaptive game mechanics: AI can be used to create adaptive game mechanics that respond to player actions and decisions. This can lead to a more personalised and challenging gaming experience, with enemies that respond and adapt to player behaviour. Improved performance optimisation: AI can be used to optimise game performance, such as reducing load times, improving frame rates, and reducing resource usage.

What is the impact of taking all the musical know-how and ingesting into an AI brain with only asking questions expressing your musical tastes? Who needs to be a musician to entertain when we will soon be able to create our own music even more easily and tap into the human genius of every muscian that has a recording? Google researchers say MusicLM is based on a model generating high-fidelity music from text descriptions such as "a calming violin melody backed by a distorted guitar riff". You can find the details on GitHub. MusicLM is built on a neural network, and trained on a large music data set of over280,000 hours of music, enabling it to automatically produce innovative music tracks of diverse instruments, genres, and concepts based on text descriptions. 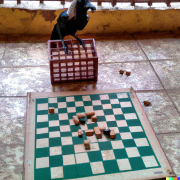 Large Language Models (LLM) are on fire, capturing public attention by their ability to provide seemingly impressive completions to user prompts (NYT coverage). They are a delicate combination of a radically simplistic algorithm with massive amounts of data and computing power. They are trained by playing a guess-the-next-word game with itself over and over again. Each time, the model looks at a partial sentence and guesses the following word. If it makes it correctly, it will update its parameters to reinforce its confidence; otherwise, it will learn from the error and give a better guess next time.