Before viewing the AI Architect- Autonomous Driving at Tephra job, please verify that you are a human and not a robot overlord.

There's no denying that the robotics startup world has taken a hit during the ongoing economic downturn. Recent numbers prove what we've all suspected for some time. But two things are true: 1) The lull is temporary; and 2) While robotics isn't recession-proof, construction might as well be. This is certainly a theme of late -- as other categories of robotics have struggled to raise, those operating in construction appear relatively unimpacted. New York-based Toggle this morning announced that it has added another $3 million to its coffers as part of a "Series A Extension."

The Justice Department has been urged by representatives of a U.S. national-security panel to consider economic-espionage charges against leaders of TuSimple Holdings Inc., an American self-driving-truck company with ties to China, according to people familiar with the matter. The recommendation for criminal charges, made late last year, stemmed from concerns that two founders and the current chief executive of the San Diego-based company were improperly transferring technology to a Chinese startup, the people said. The concerns were based on material gathered as part of a national-security review of TuSimple launched earlier last year.

San Francisco is getting cold feet about self-driving car tests

Officials in San Francisco have asked for a halt to the expansion of driverless car tests across the city after a series of incidents that have hampered the work of emergency services. San Francisco's position at the heart of Silicon Valley and its wealth of technology talent has made it a hotbed for the driverless car industry. Both Waymo, owned by Google's parent company Alphabet, and Cruise, owned by General Motors, operate experimental robotic taxi services in the city. But they haven't been without problems. New Scientist has previously reported how autonomous vehicles (AV) from Cruise, for example, have randomly stopped and blocked traffic and had a run-in with police.

Generative AI has the potential to transform industrial design and engineering, making it more important than ever for leaders in those industries to stay ahead. So MIT Technology Review has created a new research report that highlights the potential benefits--and pitfalls-- of this new technology. The report includes two case studies from leading industrial and engineering companies that are already applying generative AI to their work--and a ton of takeaways and best practices from industry leaders. It is available now to download for $195.

Mass-market military drones have changed the way wars are fought

Explosions in Armenia, broadcast on YouTube in 2020, revealed this new shape of war to the world. There, in a blue-tinted video, a radar dish spins underneath cyan crosshairs until it erupts into a cloud of smoke. The action repeats twice: a crosshair targets a vehicle mounted with a spinning dish sensor, its earthen barriers no defense against aerial attack, leaving an empty crater behind. The clip, released on YouTube on September 27, 2020, was one of many the Azerbaijan military published during the Second Nagorno-Karabakh War, which it launched against neighboring Armenia that same day. The video was recorded by the TB2.

Robots were on the main expo floor at CES this year, and these weren't just cool robots for marketing purposes. I've been tracking robots at CES for more than 10 years, watching the transition from robot toys to real robots. Increasing prominence has been given to self-driving cars, LiDARs and eVTOL drones, but, in my mind it was really the inclusion of John Deere and agricultural robots last year that confirmed that CES was incorporating more industry, more real machines, not just gadgets. In fact, according to the organizing association CTA or the Consumer Technology Association, these days CES no longer stands for the Consumer Electronics Show. CES now just stands for CES, one of the world's largest technology expos.

One of the most remarkable things about construction robotics is the sheer breadth of tasks that can potentially be automated. As I've noted before, the entire category is a prime target for robotics startups, given that it fills all of the big Ds of automation -- dull, dirty and (quite often) dangerous. It's also one of those areas that have become increasingly difficult to staff, post-pandemic, even as construction work came roaring back. So, if I'm running a fairly successful company that makes construction robots, I'm certainly thinking of diversification. The quickest way to jump start that is, of course, acquiring another, smaller startup.

How Digital Twins Are Driving The Future Of Autonomous Vehicle

As your self-driving car navigates this exhilarating course, decelerating for twists and turns, the stakes are high. That's because on this test track, no variable in any given driving scenario is left unturned, and every variable is repeatably and reliably measured. The mission is to train your car's autonomous driving algorithm so that it makes the optimal decision every time, with no catastrophic errors in the process. This sounds like an impossible feat in the real world, where virtually every variable surrounding a self-driving car is unpredictable. Moreover, accidents during test runs are bound to happen. 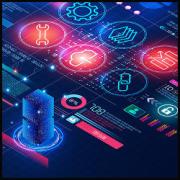 Machine learning (ML) is ubiquitous, contributing to society-facing applications that each day impact how we work, play, communicate, live, and solve problems. In 2015, after Marc Andreesen proclaimed "software is eating the world," others countered "machine learning is eating software." While there have been exciting ACM A.M. Turing-award-winning worthy advances in the science of ML, it is important to remember ML is not just an academic subject: it is a technology used to build software that is consequential in the real world. Failures of ML systems are commonplace in the news: IBM's Oncology Expert Advisor project is canceled for poor results after a $60 million investment; the chatbot Tay learns abusive language; an Uber self-driving car runs a red light; a Knightscope security robot knocks over a toddler;8 facial recognition systems unfairly make three times more errors for non-white non-males.2