We are excited to bring Transform 2022 back in-person July 19 and virtually July 20 - 28. Join AI and data leaders for insightful talks and exciting networking opportunities. Before Dr. Alan Turing designed the first computer, people merely dreamed of intelligent machines that could read paperwork and do most of their grunge work for them. Science-fiction movies depict advanced software processing large amounts of documents to find hidden insights that save the day. Today this is available in real life from progressive-thinking software providers. One of them, San Francisco-based Automation Hero, today launched v6.0 of its Hero Platform, a SaaS service the company claims takes a quantum leap in OCR (optical character recognition) document-processing accuracy.

Baymax!, the Disney sequel to 2014's Big Hero 6, will debut on June 29th. Disney shared the release date on Friday, alongside a new trailer showing the loveable healthcare robot from the film attempting to help the citizens of San Fransokyo. "In each of our six episodes, Baymax just wants to help someone--and a lot of times they don't want to be helped," said creator Don Hall. "He sets out to fix a physical issue that he's identified, and in the process, gets to a deeper, more emotional place and can be almost transformative in that role." Baymax! is the second Big Hero 6 sequel following Big Hero 6: The Series, a 2D animated show that ran for three seasons on the Disney Channel. 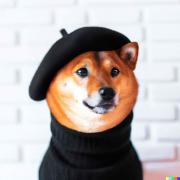 OpenAI, a San Francisco Artificial Intelligence company closely affiliated with Microsoft, launched an A.I. system and neural network in January 2021 known as DALL-E. Named using a pun of the surrealist artist Salvador Dalí and Pixar's famous movie WALL-E, DALL-E creates images from text.In this blog, we'll let you in on everything you should know about DALL-E, its variation DALL-E 2, and share ten of the most creative AI-generated images of Dall-E 2. Picture of a dog wearing a beret and a turtleneck generated by the DALL-E 2 image generation software. Now, you may be wondering what DALL-E is all about. It's an AI tool that takes a description of an object or a scene and automatically produces an image depicting the scene/object. DALL-E also allows you to edit all the wonderful AI-generated images you've created with simple tools and text modifications.

This new and completely free AI model can fix most of your old pictures in a split second!

No Joke: Google's AI Is Smart Enough to Understand Your Humor

Google's natural language AI is smart enough to define jokes. The ability to understand the nuances of human language will lead to better and more natural interactions with machines. Google wants to educate people about the benefits of these kinds of AI smarts through upcoming devices like its Pixel 7. Amid a flurry of new hardware including the Pixel 7, the Pixel Buds Pro and a new Pixel Tablet, Google dropped one development at its I/O developer conference that went largely unnoticed: Its AI can now understand jokes. Jokes, sarcasm and humor require understanding the subtleties of language and human behavior. When a comedian says something sarcastic or controversial, usually the audience can discern the tone and know it's more of an exaggeration, something that's learned from years of human interaction.

Fox News Flash top headlines are here. Check out what's clicking on Foxnews.com. In the coming weeks, students around the nation will hear their names read aloud, walk across a platform and move their tassels to signify graduation from high school or college. After years of working toward receiving their diploma or degree, they are now off to start a new adventure in their lives. And, for others, there may be the apprehension of not knowing what is next. As a college president, here are five pieces of advice I have for graduating seniors.

If images begin to look sharper on Microsoft Edge compared to other browsers, there's a reason for that. Microsoft is building in what it calls a "Turing Image Super Resolution engine" into Microsoft Edge, "upscaling" low-resolution images with higher fidelity. In effect, Edge will create a higher-resolution image using artificial intelligence, where it didn't exist before. Upscaling isn't new; Adobe Lightroom's Super Resolution allows you to upscale a 12 megapixel image to 48MP, for example, to print larger prints. TopazLabs' Gigapixel AI is a dedicated, paid tool to do the same, and there are other free services available on the Web that will perform the same services with varying results.

What role will artificial intelligence (AI) robots play in the future? In the industrial field, at home, at school, and on the battlefield, AI robots will play an auxiliary role for humans. AI will be a cook, a friend, a caregiver. People may feel'family love' like companion animals to AI robots. However, despite this, it is difficult to completely shake off the sense of alienation and fear of AI.

Originally published on Towards AI the World's Leading AI and Technology News and Media Company. If you are building an AI-related product or service, we invite you to consider becoming an AI sponsor. At Towards AI, we help scale AI and technology startups. Let us help you unleash your technology to the masses. A cryptocurrency is a digital currency that may be traded without the involvement of a government or bank. On the other hand, cryptocurrencies are generated using cryptographic processes that allow users to purchase, sell, and exchange them safely.