TL;DR: A lifetime subscription to TexTalky AI Text-to-Speech is on sale for £28.08, saving you 93% on list price. From marketing content and video narration to customer support and tutorials, there are many instances in today's marketplace when a professional human voice is needed. But due to time constraints, lack of proper recording equipment, or simply the fact you hate your voice, you may turn to a text-to-speech software. Sometimes the robotic voices from these apps leave a lot to be desired. TexTalky AI Text-to-Speech aims to convert your text to lifelike human voices in just a few seconds.

TL;DR: As of Feb. 11, you can slash 37% off this NEWYES Scan Reader Pen 3 Text-to-Speech OCR Multilingual Translator and get it for $124.99 instead of $199. If you are studying a second language, taking lots of notes for work or school, struggle with written text, or just want an easier way to get through the stack of books on your nightstand, there are tools that can help you out. One that's making its mark -- and happens to be on sale -- is the NEWYES Scan Reader Pen 3. The NEWYES Scan opens up new possibilities for learning. You can use it to read and retain information, translate words and phrases, look up words on the spot, capture quotes and transfer them to your computer, or even record audio to review later. This text-to-speech reader pen recognizes 3,000 characters per minute and translates in 0.3 seconds with 98 percent accuracy.

Neural text-to-speech (TTS) models are successfully used to generate high-quality human-like speech. However, most TTS models can be trained if only the transcribed data of the desired speaker is given. That means that long-form untranscribed data, such as podcasts, cannot be used to train existing models. A recent paper on arXiv proposes an unconditional diffusion-based generative model. It is trained on untranscribed data that leverages a phoneme classifier for text-to-speech synthesis.

A text-to-speech TikTok voice made by Disney that made users sound like Rocket Raccoon does not allow users to'say' words like "gay", "lesbian", or "queer". Numerous posts by users showed the feature failing to say the LGBTQ terms before it was quietly changed to allow the words. Words like "bisexual" and "transgender", were allowed by the feature. Originally, Rocket's voice would skip over the words when written normally but would be pronounced phonetically if a user wrote "qweer", for example. Attempts to make it read text that contained only the seemingly-prohibited words resulted in an error message saying that text-to-speech was not supported by the language chosen.

Reels is finally introducing an inventive, exciting new tool, unlike anything we've seen before! On Friday, Instagram announced that Reels is launching two new audio tools: Voice Effects and Text to Speech. Text to Speech allows an auto-generated voice to read users' text aloud. Think of it as Siri narrating your video for you, or 60 percent of the videos on your TikTok For You Page. You can use it by sliding over to the Reels camera and recording your video.

Instagram was clearly trying to court TikTok users when it launched its short-form video format called Reels. Now, it has introduced two features already widely popular on TikTok, perhaps in hopes that they can convert those who've been hesitating to use Reels due to their absence. One of those tools is text-to-speech, which provides a robotic voiceover for videos. When a user types in text for their videos, they'll now be able to get an auto-generated voice to read it out loud by accessing the feature living inside the Text bubble on the lower left corner of the screen. They then have to choose between the two available voice options before posting their video. While text-to-speech will make Reels more accessible, it's also popular on TikTok just because some find a robotic voice narrating their activities a funny addition to their content. 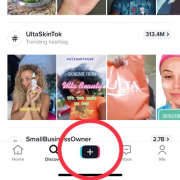 We're a couple of decades into the 21st century, cars are literally starting to fly, a vacation to space is just around the corner ... and yet somehow, computers still sound like parodies of confused robots whenever asked to convert text-to-speech (TTS). Come on, devs, there has to be a better solution. A firm called WellSaid Labs believes it has one, and it's getting a boost thanks to an oversubscribed Series A. "Plain and simple, WellSaid is the future of content creation for voice. This is why thousands of customers love using the product daily with off-the-charts bottom-up adoption. Matt and Michael have assembled a world-class team, and we couldn't be more thrilled to be a part of the WellSaid journey," says Cameron Borumand, General Partner at FUSE, which led the round.