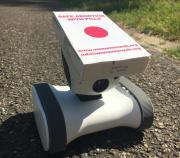 Two robots delivering abortion pills at a protest in Belfast have been confiscated by police. The robots were part of an initiative by the group Women on Waves, who claimed that the country's "mediaeval" anti-abortion laws were being broken because the so-called abortion robots were being operated from the Netherlands. "We try to find legal loopholes to draw attention to laws that violate women's rights," Rebecca Gomperts, a spokesperson for Women on Waves, told The Independent. "We've done it before with a ship and a drone to help women who cannot legally get an abortion in their country." One of the small remote controlled vehicles was seized by police before the protest, however a second was deployed after it was hidden by the protestors.