Cluster analysis or clustering is the task of grouping a set of objects in such a way that objects in the same group (called a cluster) are more similar (in some sense) to each other than to those in other groups (clusters). It is a main task of exploratory data mining, and a common technique for statistical data analysis, used in many fields, including machine learning, pattern recognition, image analysis, information retrieval, bioinformatics, data compression, and computer graphics. (Wikipedia)

Clustering is an unsupervised algorithm that is used for determining the intrinsic groups present in unlabelled data. For instance, a B2C business might be interested in finding segments in its customer base. Clustering is hence used commonly for different use-cases like customer segmentation, market segmentation, pattern recognition, search result clustering etc. Some standard clustering techniques are K-means, DBSCAN, Hierarchical clustering amongst other methods. Clusters created using techniques like Kmeans are often not easy to decipher because it is difficult to determine why a particular row of data is classified in a particular bucket.

Best Papers to Read on the Mean Shift Algorithm

Abstract: Two important nonparametric approaches to clustering emerged in the 1970's: clustering by level sets or cluster tree as proposed by Hartigan, and clustering by gradient lines or gradient flow as proposed by Fukunaga and Hosteler. In a recent paper, we argue the thesis that these two approaches are fundamentally the same by showing that the gradient flow provides a way to move along the cluster tree. In making a stronger case, we are confronted with the fact the cluster tree does not define a partition of the entire support of the underlying density, while the gradient flow does. Abstract: Mean shift is a simple interactive procedure that gradually shifts data points towards the mode which denotes the highest density of data points in the region. Mean shift algorithms have been effectively used for data denoising, mode seeking, and finding the number of clusters in a dataset in an automated fashion.

Clustering of large-scale data is key to implementing segmentation-based algorithms. Segmentation can include identifying customer groups to facilitate targeted marketing, identifying prescriber groups to allow health care players to reach out to them with the right messaging, and identifying patterns or abnormal values in the data. K-Means is the most popular clustering algorithm adopted across different problem areas, mostly owing to its computational efficiency and ease of understanding the algorithm. K-Means relies on identifying cluster centers from the data. It alternates between assigning points to these cluster centers using the Euclidean distance metric and recomputes the cluster centers till a convergence criterion is achieved.

Unsupervised learning algorithms are "unsupervised" because you let them run without direct supervision. You feed the data into the algorithm, and the algorithm figures out the patterns. The following picture shows the differences between three of the most popular unsupervised learning algorithms: Principal Component Analysis, k-Means clustering and Hierarchical clustering. The three are closely related, because data clustering is a type of data reduction; PCA can be viewed as a continuous counterpart of K-Means (see Ding & He, 2004).

In the beginning, let's have some common terminologies overview, A cluster is a group of objects that lie under the same class, or in other words, objects with similar properties are grouped in one cluster, and dissimilar objects are collected in another cluster. And, clustering is the process of classifying objects into a number of groups wherein each group, objects are very similar to each other than those objects in other groups. Simply, segmenting groups with similar properties/behaviour and assign them into clusters. Being an important analysis method in machine learning, clustering is used for identifying patterns and structure in labelled and unlabelled datasets. Clustering is exploratory data analysis techniques that can identify subgroups in data such that data points in each same subgroup (cluster) are very similar to each other and data points in separate clusters have different characteristics. 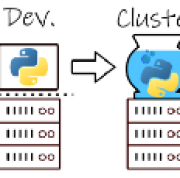 This article explains what data engineers are and what their varied tasks and duties are. Seaborn is a very prominent library used during Exploratory Data Analysis of any data science project you are working upon. At times, this cohort could feel overwhelming due to the sheer volume of material I would need to learn and practice.

This is part numero tres of the Explaining Machine Learning Algorithms to a 10-Year Old series. If you read the two previous ones about XGBoost Regression and K-Means Clustering, then you know the drill. We have a scary-sounding algorithm, so let's strip it of its scary bits and understand the simple intuition behind it. In the same vein as K-Means Clustering, today we are going to talk about another popular clustering algorithm -- Hierarchical Clustering. Let's say a clothing store has collected the ages of 9 of its customers, labeled C1-C9, and the amount each of them spent at the store in the last month.

K-Means Clustering is an unsupervised learning algorithm that is used to solve the clustering problems in machine learning or data science. In this article, I would be giving you a detailed explanation and how this model works. Unsupervised Learning method K-Means Clustering divides the unlabeled dataset into various clusters. K specifies the number of pre-defined clusters that must be produced throughout the process; for example, if K 2, two clusters will be created, and if K 3, three clusters will be created, and so on. It allows us to cluster data into distinct groups and provides a simple technique to determine the categories of groups in an unlabeled dataset without any training. It's a centroid-based approach, which means that each cluster has its own centroid. 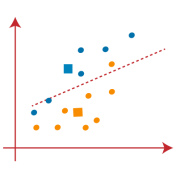 With the rising use of the Internet in today's society, the quantity of data created is incomprehensibly huge. Even though the nature of individual data is straightforward, the sheer amount of data to be analyzed makes processing difficult for even computers. To manage such procedures, we need large data analysis tools. Data mining methods and techniques, in conjunction with machine learning, enable us to analyze large amounts of data in an intelligible manner. It is capable of classifying unlabeled data into a predetermined number of clusters based on similarities (k).

A Practical Introduction to Hierarchical clustering from scikit-learn 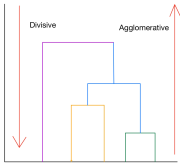 Hierarchical clustering is part of the group of unsupervised learning models known as clustering. This means that we don't have a defined target variable unlike in traditional regression or classification tasks. The point of this machine learning algorithm, therefore, is to identify distinct clusters of objects that share similar characteristics by using defined distance metrics on the selected variables. Other machine learning algorithms that fit within this family include Kmeans or DBscan. This specific algorithm comes in two main flavours or forms: top-down or bottom-up.