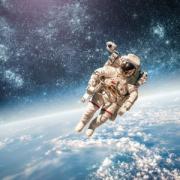 An Extinct Cave Bear's DNA Was Still Readable After 360,000 Years George Dvorsky Gizmodo "The bone analyzed in the new study--a petrous bone from the inner ear of an extinct cave bear--was approximately seven times older than any the team had studied before, 'showing that genome data can be recovered from temperate zone samples spanning more than 300 millennia,' [Axel Barlow] said. Indeed, older DNA samples exist, but they were all sourced from fossils found in permafrost, like the astounding million-year-old mammoth teeth that recently made headlines." Some, such as mRNA vaccines, are already changing our lives, while others are still a few years off. Below, you'll find a brief description along with a link to a feature article that probes each technology in detail. We hope you'll enjoy and explore--taken together, we believe this list represents a glimpse into our collective future." She Beat Cancer at 10. Now She's Set to Be the Youngest American in Space. Arceneaux, a physician assistant at St. Jude Children's Research Hospital in Memphis, will be one of four people on a SpaceX Falcon 9 rocket lifting off from Florida. Scheduled to launch late this year, it is to be the first crewed mission to circle Earth in which no one on board is a professional astronaut."

An expert explains: 3 ways AI can help in the global battle against cancer

This rings an alarm bell as our health systems are overburdened and fragile. The pandemic has further exposed how the response of health systems to the chronic diseases can take the back seat with the onset of new and emerging infections. A report by the Indian Institute of Health Management and Research reveals that India has only over 1,250 oncologists currently, against the estimated need for 5,000. The lack of trained manpower for mass screening programs and required infrastructure portrays further apathy. India has about 27 dedicated cancer hospitals and an additional 300 general or multi-specialty ones providing care to cancer patients.

Some healthcare provider organizations are using machine learning and other forms of artificial intelligence to provide clinicians with the best evidence-based care pathways. A group's aim could be to improve a patient's care plan based on personalized analytics. Another goal could be the further merging of evidence-based care paths with historical utilization and outcomes in order to offer optimal patient care. Provider organizations might be using social determinants of health combined with machine learning to offer clinically meaningful services. Healthcare IT News talked over these ideas with Niall O'Connor, chief technology officer at Cohere Health, a vendor of artificial intelligence technology and services designed to improve the provider, patient and payer experiences.

In the article the authors describe a new field of study converging AI, basic research, and medicine referred to as Longevity Medicine. Another definition for Longevity Medicine is the preventative and restorative medicine enabled by the deep aging clocks and artificial intelligence. The article was authored by Alex Zhavoronkov, the founder and chief longevity officer of Deep Longevity, a computer scientist with a PhD in biophysics, Evelyne Yehudit Bischof, a practicing medical doctor trained in the top European and the US medical schools actively engaged in aging research and gerooncology at the University Hospital Basel in Switzerland, and at Shanghai University of Medicine and Health Sciences, and one of the most prolific scientists and entrepreneurs in artificial intelligence, Kai-Fu Lee. The traditional approach to medicine is to treat diseases. However, scientists estimate (Cutler and Mattson, 2006) that complete elimination of cancer would result in only 2.3 year increase in life expectancy in the US at birth and 1.3 year gain at age 65.

The internet today is nothing like the World Wide Web that Sir Tim Berners-Lee envisioned back when he invented it in 1989. While it continues to be a place where people can interact in a free exchange of ideas, individuals and groups have lost their sense of empowerment to a handful of giant monopolies and countries that are bent on collecting their personal data. "Once a platform becomes dominant, it is able to collect more data," said Pieter Verdegem, senior lecturer at the University of Westminster School of Media and Communication. "That is what we are seeing around the world, and it explains why we have the so-called GAFAM – Google, Apple, Facebook, Amazon and Microsoft – in the U.S. and the so-called BAT – Baidu, Alibaba and Tencent – in China." "The next wave is about artificial intelligence," Verdegem said. "Companies and governments will use all that data to train algorithms to come up with better deep learning models.

HeartFlow has announced that the National Health Service England (NHSE) and NHS Improvement have mandated that English hospitals adopt the AI-powered HeartFlow FFRct Analysis to fight coronary heart disease (CHD). The HeartFlow Analysis has been selected as one of the innovations supported by NHSE's new MedTech Funding Mandate. The Mandate, which will begin 1st April 2021, aims to provide innovative medical devices and digital products to NHSE patients faster, and is a key policy in helping to improve patient care and reduce costs for the public health service. The Mandate includes the option to extend funding for up to an additional three years through 31 March 2024. HeartFlow has also received extended funding through NHSE's Innovation and Technology Payment Programme (ITP) for a third year.

Healthcare is a human right, however, nobody said all coverage is created equal. Artificial intelligence and machine learning systems are already making impressive inroads into the myriad fields of medicine -- from IBM's Watson: Hospital Edition and Amazon's AI-generated medical records to machine-formulated medications and AI-enabled diagnoses. But in the excerpt below from Frank Pasquale's New Laws of Robotics we can see how the promise of faster, cheaper, and more efficient medical diagnoses generated by AI/ML systems can also serve as a double-edged sword, potentially cutting off access to cutting-edge, high quality care provided by human doctors. Excerpted from New Laws of Robotics: Defending Human Expertise in the Age of AI by Frank Pasquale, published by The Belknap Press of Harvard University Press. We might once have categorized a melanoma simply as a type of skin cancer.

Facebook and NYU trained an AI to estimate COVID outcomes

COVID-19 has infected more than 23 million Americans and killed 386,000 of them to date, since the global pandemic began last March. Complicating the public health response is the fact that we still know so little about how the virus operates -- such as why some patients remain asymptomatic while it ravages others. Effectively allocating resources like ICU beds and ventilators becomes a Sisyphean task when doctors can only guess as to who might recover and who might be intubated within the next 96 hours. However a trio of new machine learning algorithms developed by Facebook's AI division (FAIR) in cooperation with NYU Langone Health can help predict patient outcomes up to four days in advance using just a patient's chest x-rays. The models can, respectively, predict patient deterioration based on either a single X-ray or a sequence as well as determine how much supplemental oxygen the patient will likely need.

AI-Powered Text From This Program Could Fool the Government

In October 2019, Idaho proposed changing its Medicaid program. The state needed approval from the federal government, which solicited public feedback via Medicaid.gov. But half came not from concerned citizens or even internet trolls. They were generated by artificial intelligence. And a study found that people could not distinguish the real comments from the fake ones.

Artificial intelligence (AI) technology has been increasingly used in the implementation of advanced Clinical Decision Support Systems (CDSS). Research demonstrated the potential usefulness of AI-powered CDSS (AI-CDSS) in clinical decision making scenarios. However, post-adoption user perception and experience remain understudied, especially in developing countries. Through observations and interviews with 22 clinicians from 6 rural clinics in China, this paper reports the various tensions between the design of an AI-CDSS system ("Brilliant Doctor") and the rural clinical context, such as the misalignment with local context and workflow, the technical limitations and usability barriers, as well as issues related to transparency and trustworthiness of AI-CDSS. Despite these tensions, all participants expressed positive attitudes toward the future of AI-CDSS, especially acting as "a doctor's AI assistant" to realize a Human-AI Collaboration future in clinical settings. Finally we draw on our findings to discuss implications for designing AI-CDSS interventions for rural clinical contexts in developing countries.