The COVID-19 pandemic has increased the focus on the use of artificial intelligence (AI) across the life sciences organization, from R&D to manufacturing, supply chain, and commercial functions. During the pandemic, company leadership and management realized that they could run many aspects of their business remotely and with digital solutions. This experience has transformed mindsets; leaders are more likely to lean into a future that lies in digital investments, data, and AI because of this experience. At present, the life sciences industry has only begun to scratch the surface of AI's potential, primarily applying it to automate existing processes. By melding AI with rigorous medical and scientific knowledge, companies can do even more to leverage this technology to transform processes and achieve a competitive edge. AI has the potential to identify and validate genetic targets for drug development, design novel compounds, expedite drug development, make supply chains smarter and more responsive, and help launch and market products. We will highlight a number of these use cases in this report.

Deep Learning - Pushing the boundaries of health AI. How do we make it fair and the data safe? - Coda Change

Over the last 5 years there has actually been a confluence of a few different historical threats. We’ve had health data being increasingly digitalised and we’ve had the proliferation of accessible massive scale computing, both of which have un-locked a technique developed in the early 80’s called deep learning, which is really good at pattern recognition over large data sets.Key trends in the last year include the first randomised clinical trials in the clinical application of AI in health, the potential for AI in clinical discovery particularly using multimodal data (including electronic medical records, imaging data, genomic data) and combining that to find patterns in very large data sets. This is the real beginning of precision medicine. Finally there are day to day clinical process applications being used to predict resource allocation or disease outbreaks.At the same time there are some systemic challenges facing AI in health, including workflow integration, bias, equity and just access. How can we mitigate these biases and make them fair.Finally how do we make this sensitive data safe? Is the answer Federated machine learning where we send the AI algorithms out to local networks and apply them there? 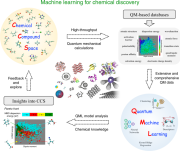 Computational design and discovery of molecules and materials relies on the exploration of increasingly growing chemical spaces1,2 (see Figure 1). The discovery and formulation of new drugs, antivirals, antibiotics, catalysts, battery materials, and in general chemicals with tailored properties, require a shift of paradigm to search in unchartered swaths of the vast chemical space3. From the fundamental perspective of quantum mechanics (QM), this paradigm shift stems from the fact that molecular properties exhibit complex correlations3, which yields whole Pareto fronts of candidate molecules in multiproperty optimization algorithms, enabling "freedom of design". As an example, taking data for more than 100,000 small drug-like molecules, it is found that their molecular electronic (highest occupied molecular orbital–lowest unoccupied molecular orbital) gap is not correlated at all with their polarizability3, in contrast to widely quoted chemical rules. This implies that it is possible to design highly conductive and weakly interacting molecules, or molecules that exhibit stability to dielectric breakdown and yet are strongly interacting.

Many biologists use machine learning (ML) as a computational tool to analyze a massive amount of data, helping them to recognise potential new drugs. MIT researchers have now integrated a new feature into these types of machine learning algorithms, enhancing their prediction-making ability. Using this new tool allows computer models to account for uncertainty in the data they are testing, MIT researchers detected several promising components that target a protein required by the bacteria that cause tuberculosis (TB). Although computer scientists previously used this technique, they have not taken off in biology. "It could also prove useful in protein design and many other fields of biology," says the Simons Professor of Mathematics and head of the Computation and Biology group in MIT's Computer Science and Artificial Intelligence Laboratory (CSAIL) Bonnie Berger.

Machine learning is a computational tool used by many biologists to analyze huge amounts of data, helping them to identify potential new drugs. MIT researchers have now incorporated a new feature into these types of machine-learning algorithms, improving their prediction-making ability. Using this new approach, which allows computer models to account for uncertainty in the data they're analyzing, the MIT team identified several promising compounds that target a protein required by the bacteria that cause tuberculosis. This method, which has previously been used by computer scientists but has not taken off in biology, could also prove useful in protein design and many other fields of biology, says Bonnie Berger, the Simons Professor of Mathematics and head of the Computation and Biology group in MIT's Computer Science and Artificial Intelligence Laboratory (CSAIL). "This technique is part of a known subfield of machine learning, but people have not brought it to biology," Berger says.

AI is one of the hottest sectors, with its technology promising to revolutionize and automate every industry imaginable. Even AI-enabled applications can bring the next major disruption within enterprise software. While AI is still in its early stage, people across the globe are interacting with it either directly or indirectly on a daily basis via virtual assistants, facial-recognition technology, gaming platforms, chatbots, mapping applications, and a host of other software. As developments in AI accelerate, companies are looking to expand their offerings by attracting investments or series funding. Hence, this makes a perfect time for startups to find investors to further their projects and plans.

The COVID-19 pandemic is the greatest global healthcare crisis of our generation, presenting enormous challenges to medical research, including clinical trials. Advances in machine learning are providing an opportunity to adapt clinical trials and lay the groundwork for smarter, faster and more flexible clinical trials in the future. In an article published in Statistics in Biopharmaceutical Research, an international collaboration of data scientists and pharmaceutical industry experts – led by the Director of the Cambridge Centre for AI in Medicine, Professor Mihaela van der Schaar of the University of Cambridge – describe the impact that COVID-19 is having on clinical trials, and reveal how the latest machine learning (ML) approaches can help to overcome challenges that the pandemic presents. The paper covers three areas of clinical trials in which ML can make contributions: in trials for repurposing drugs to treat COVID-19, trials for new drugs to treat COVID-19, and ongoing clinical trials for drugs unrelated to COVID-19. The team, which includes scientists from pharmaceutical companies such as Novartis, notes that'the pandemic provides an opportunity to apply novel approaches that can be used in this challenging situation.'

Interest in artificial intelligence continues to explode across every industry, but few areas offer more opportunities for drastic improvement of human life than the application of machine learning and AI in healthcare and the medical field. Let's begin first with a definition. AI in healthcare and medicine means using data more effectively through machine learning algorithms to produce positive patient outcomes. The sheer amount of data created through IoT-enabled devices, the electronic medical record (EMR), and ever-expanding quantities of genetic data has made possible a large number of applications of artificial intelligence in healthcare. Check out the Harvard Business Review ranking of the potential value that these applications could bring to the healthcare industry. The underlying value of artificial intelligence is to enhance human decision-making and automate processes that are time- or resource-intensive for humans to perform.