Massachusetts Commissioner of Education: At some point remote, hybrid learning needs to be 'off the table'

With health metrics improving and mitigation measures in place across Massachusetts schools, Elementary and Secondary Commissioner Jeff Riley said Tuesday it's time to begin the process of getting more students back into classrooms. Riley, who is set to join Gov. Charlie Baker and Education Secretary James Peyser for a 2 p.m. press conference on education and COVID-19, told Board of Elementary and Secondary Education members that he plans to ask them in March to give him the authority to determine when hybrid and remote school models no longer count for learning hours, as part of a broader plan to return more students to physical school buildings. Riley said he would take a "phased approach to returning students into the classrooms, working closely with state health officials and medical experts." He said his plan would focus on elementary school students first, with the initial goal of having them learning in-person five days a week this April. "At some point, as health metrics continue to improve, we will need to take the remote and hybrid learning models off the table and return to a traditional school format," Riley said.

The automatic evaluation for school assignments is an important application of AI in the education field. In this work, we focus on the task of personalized multimodal feedback generation, which aims to generate personalized feedback for various teachers to evaluate students' assignments involving multimodal inputs such as images, audios, and texts. This task involves the representation and fusion of multimodal information and natural language generation, which presents the challenges from three aspects: 1) how to encode and integrate multimodal inputs; 2) how to generate feedback specific to each modality; and 3) how to realize personalized feedback generation. In this paper, we propose a novel Personalized Multimodal Feedback Generation Network (PMFGN) armed with a modality gate mechanism and a personalized bias mechanism to address these challenges. The extensive experiments on real-world K-12 education data show that our model significantly outperforms several baselines by generating more accurate and diverse feedback. In addition, detailed ablation experiments are conducted to deepen our understanding of the proposed framework.

Students and parents across the state said they struggled with remote learning, but are fearful to return to school buildings amid the coronavirus pandemic, placing the stress of uncertainty upon families as fall approaches. "I think it is cruel and mean to think that students should be in a room at their seat without any physical touch for hours," said Jay'dha Rackard, 12, who attends Helen Davis Leadership Academy. Her mother, Janina Rackard, said she decided to keep her daughter home for remote learning this school year, "I feel like our children are being treated like Petri dishes." School shutdowns and remote learning models from the spring took a toll on students and parents, families said during a Thursday virtual press conference hosted by the Massachusetts Education Justice Alliance. "Remote learning probably came at the worst possible time in my life," said Chelsea High School senior Victoria Stutto. She said her father died shortly after school was shut down.

The state said it has no formal reporting process for tracking coronavirus outbreaks that have already cropped up in summer school programs, leaving teachers unions wondering how health officials plan to prevent outbreaks considered "inevitable" in the fall. "We are not formally tracking them, but we are trying to notice them as they pop up," said Department of Elementary and Secondary Education spokeswoman Jacqueline Reis. "There is no formal reporting process for schools." Reis said the DESE is still finalizing its guidance as schools shore up their plans for remote, in-person or hybrid learning once classes resume in September. "It's absurd and it's stunning but its also not a surprise," said Merrie Najimy, who leads the Massachusetts Teachers Association. 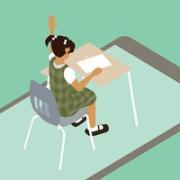 On lengths of yarn stretched between chairs, sixth-grade math students were placing small yellow squares of paper, making number lines--including everything from fractions to negative decimals--in a classroom at Walsh Middle School. Their teacher, Michele O'Connor, had assigned the number lines in previous years, but this year was different. She, personally, hadn't spent much time leading students through practice problems or introducing the basic math concepts they would use in the project. That had largely been relegated to online math lessons, part of separate periods of learning time when students were free to work through computer-based lessons in any subject they chose, at their own pace. The change at Walsh, located in Framingham, Massachusetts, is part of a nationwide pilot program, one that could indicate just how deeply and how quickly the personalized-learning trend will penetrate the average classroom. Indeed, despite the buzz around personalized learning, there's no simple recipe for success, and the common ingredients -- such as adaptive-learning technology and student control over learning -- can backfire if poorly implemented.