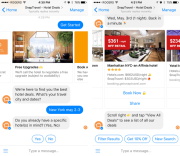 Toronto, Canada-based ecommerce startup Snapcommerce today announced that it raised $85 million in a funding round led by Inovia Capital and Lion Capital, bringing its total venture capital raised to over $100 million. Snapcommerce, which is on the path to an initial public offering, says it plans to use the funds to expand into new consumer verticals while scaling its product and team. While consumer spending in the U.S. dipped last month year-over-year, on the whole, the pandemic has supercharged ecommerce. According to data from IBM's U.S. Retail Index, business closures and shelter-in-place orders accelerated the shift to digital shopping by five years, with online shopping projected to grow nearly 20% in 2020. Based on the survey data from BMC and Mercatus, ecommerce grocery orders alone totaled $5.9 billion, up 3.6% from $5.7 billion in August.