From better healthcare access to improved food security, machine learning could tackle a wide range of challenges in developing countries. In 2020, a study published in Nature showed that Google's machine learning artificial intelligence programme, DeepMind AI, outperformed radiologists in detecting breast cancer. After being trained on thousands of mammograms, the system was able to accurately identify 89% of breast cancer cases, compared to radiologists' 74%. Just imagine what a difference the deployment of such a system could make in sub-Saharan Africa, where there are 0.2 doctors per 1000 people, according to the World Bank. Marilyn Moodley, Country Leader for South Africa and WECA (West, East, Central Africa) at SoftwareONE, says machine learning can help with some of the region's most pervasive problems, from reducing poverty and improving education to delivering healthcare and addressing sustainability challenges such as food demand.

The Ebola virus and the disease in effect tend to randomly move individuals in the population around susceptible, infected, quarantined, hospitalized, recovered, and dead sub-population. Motivated by the effectiveness in propagating the disease through the virus, a new bio-inspired and population-based optimization algorithm is proposed. This paper presents a novel metaheuristic algorithm named Ebola optimization algorithm (EOSA). To correctly achieve this, this study models the propagation mechanism of the Ebola virus disease, emphasising all consistent states of the propagation. The model was further represented using a mathematical model based on first-order differential equations. After that, the combined propagation and mathematical models were adapted for developing the new metaheuristic algorithm. To evaluate the proposed method's performance and capability compared with other optimization methods, the underlying propagation and mathematical models were first investigated to determine how they successfully simulate the EVD. Furthermore, two sets of benchmark functions consisting of forty-seven (47) classical and over thirty (30) constrained IEEE CEC-2017 benchmark functions are investigated numerically. The results indicate that the performance of the proposed algorithm is competitive with other state-of-the-art optimization methods based on scalability analysis, convergence analysis, and sensitivity analysis. Extensive simulation results indicate that the EOSA outperforms other state-of-the-art popular metaheuristic optimization algorithms such as the Particle Swarm Optimization Algorithm (PSO), Genetic Algorithm (GA), and Artificial Bee Colony Algorithm (ABC) on some shifted, high dimensional and large search range problems. 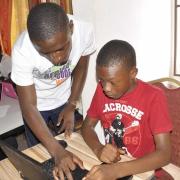 A Ghanaian teenager, Mustapha Diyaol Haqq, created an AI system that is able to predict breast cancer. Ahmadiyya Senior High School in Kumasi, says he taught himself to code and got himself working as a coding instructor and a mentor in Ghana Code Club. The AI model makes use of breast cancer test results from breast fine needle aspiration test to classify breast cancer tumour I for malignant (cancerous) and O for benign (Not cancerous). Mustapha believes that over time with the use of larger Ghanaian data, models can be created with higher accuracy and used for real case scenarios. His model was tested on the machine learning repository by the University of California.