Some interviewers ask hard questions while others ask relatively easy questions. As an interviewee, it is your choice to go prepared. And when it comes to a domain like Machine Learning, preparations might fall short. You have to be prepared for everything. While preparing, you might have stuck at a point where you wonder what more shall I read. Well, based on almost 15-17 data science interviews that I have attended, here I have put 15, very commonly asked, as well as important Data Science and Machine Learning related questions that were asked to me in almost all of them and I recommend you must study these thoroughly.

Clustering is an unsupervised algorithm that is used for determining the intrinsic groups present in unlabelled data. For instance, a B2C business might be interested in finding segments in its customer base. Clustering is hence used commonly for different use-cases like customer segmentation, market segmentation, pattern recognition, search result clustering etc. Some standard clustering techniques are K-means, DBSCAN, Hierarchical clustering amongst other methods. Clusters created using techniques like Kmeans are often not easy to decipher because it is difficult to determine why a particular row of data is classified in a particular bucket.

Top 6 - PYTHON libraries You must know

TensorFlow is the first one. Because this is the backbone library of Data science. This is optimized for Speed, it makes use of techniques like XLA for quick linear algebra operations. Theano is a computational framework machine learning library in python for computing multidimensional arrays, ability to use completely NumPy arrays in Theano-compiled functions. Pandas make sure that the entire process of manipulating data will be easier.

Could machine learning and operations research lift each other up?

Is deep learning really going to be able to do everything? Opinions on deep learning's true potential vary. Geoffrey Hinton, awarded for pioneering deep learning, is not entirely unbiased, but others, including Hinton's deep learning collaborator Yoshua Bengio, are looking to infuse deep learning with elements of a domain still under the radar: operations research, or an analytical method of problem-solving and decision-making used in the management of organizations. Machine learning and its deep learning variety are practically household names now. There is a lot of hype around deep learning, as well as a growing number of applications using it.

My First Experience Deploying an ML Model to Production

I have been working on Machine Learning since my third year in college. But during this time, the process always involved taking the dataset from Kaggle or some other open-source website. Also, these models/algorithms were either there on some Jupyter Notebook or Python script and were not deployed to some production website, it was always localhost. While interning at HackerRank and also after starting as a Software Engineer here as a part of the HackerRank Labs team working on a new product, I got a chance to deploy three different ML Models to production, working end-to-end on them. In this blog, I will be sharing my learnings and experience from one of the deployed models.

Graph Neural Network (GNN) models typically assume a full feature vector for each node. The two inputs to this model are the (normalised) adjacency matrix A encoding the graph structure and the feature matrix X containing as rows the node feature vectors and outputs the node embeddings Z. Each layer of GCN performs node-wise feature transformation (parametrised by the learnable matrices W₁ and W₂) and then propagates the transformed feature vectors to the neighboring nodes. Importantly, GCN assumes that all the entries in X are observed. In real-world scenarios, we often see situations where some node features are missing (Fig 1).

In latest days, I've added and checked a new improvement to the model that generates the forecasts published by spxbot.com. As you might know, the input to a neural network is usually preprocessed, for many reasons, usually to eliminate excesses in the raw data and to create a more uniform analysis environment. Even if it may seem bizarre, a lot of documents available on the web agree that adding noise to the input produces a better pattern recognition. In easy words, this process enhance the ability of the neural networks to generalize, or to extract meaning from the inputs, or simply to "see" better. But what is exactly noise? 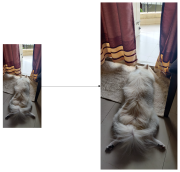 Super-resolution is the task of reconstructing a photo-realistic high-resolution image from its counterpart low-resolution image. It has long been a challenging task in the computer vision fraternity. The main challenge in this task is to make it as photo-realistic as possible. Photo-realism is a style of painting or drawing in which images look so real that they are hard to distinguish from photographs. Let me first start with some basic approaches that can be used.

Artificial intelligence (AI) algorithms trained on real astronomical observations now outperform astronomers in sifting through massive amounts of data to find new exploding stars, identify new types of galaxies and detect the mergers of massive stars, accelerating the rate of new discovery in the world's oldest science. But AI, also called machine learning, can reveal something deeper, University of California, Berkeley, astronomers found: Unsuspected connections hidden in the complex mathematics arising from general relativity--in particular, how that theory is applied to finding new planets around other stars. In a paper appearing this week in the journal Nature Astronomy, the researchers describe how an AI algorithm developed to more quickly detect exoplanets when such planetary systems pass in front of a background star and briefly brighten it--a process called gravitational microlensing--revealed that the decades-old theories now used to explain these observations are woefully incomplete. In 1936, Albert Einstein himself used his new theory of general relativity to show how the light from a distant star can be bent by the gravity of a foreground star, not only brightening it as seen from Earth, but often splitting it into several points of light or distorting it into a ring, now called an Einstein ring. This is similar to the way a hand lens can focus and intensify light from the sun. But when the foreground object is a star with a planet, the brightening over time--the light curve--is more complicated.

How to Explore a Dataset of Images with Graph Theory

When you start working on a dataset that consists of pictures, you'll probably be asked such questions as: can you check if the pictures are good? A quick-and-dirty solution would be to manually look at the data one by one and try to sort them out, but that might be tedious work depending on how many pictures you get. For example, in manufacturing, you could get a sample with thousands of pictures from a production line consisting of batteries of different types and sizes. You'll have to manually go through all pictures and arrange them by type, size, or even color. The other and more efficient option, on the other hand, would be to go the computer vision route and find an algorithm that can automatically arrange and sort your images -- this is the goal of this article. But how can we automate what a person does, i.e. compare pictures two by two with one another and sort them based on similarities?