"An ontology defines the terms used to describe and represent an area of knowledge. … Ontologies include computer-usable definitions of basic concepts in the domain and the relationships among them."
– from OWL Web Ontology Language Use Cases and Requirements. W3C Recommendation (10 February 2004). Jeff Heflin, editor. 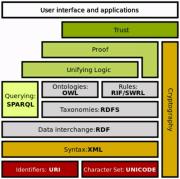 AI Researcher, Cognitive Technologist Inventor - AI Thinking, Think Chain Innovator - AIOT, XAI, Autonomous Cars, IIOT Founder Fisheyebox Spatial Computing Savant, Transformative Leader, Industry X.0 Practitioner Unicode is an information #technology standard for the consistent encoding, representation, and handling of text expressed in most of the world's writing systems. The standard is maintained by the Unicode Consortium, and as of March 2020, there is a total of 143,859 characters, with Unicode 13.0 (these characters consist of 143,696 graphic characters and 163 format characters) covering 154 modern and historic scripts, as well as multiple symbol sets and emoji. The character repertoire of the Unicode Standard is synchronized with ISO/IEC 10646, and both are code-for-code identical. The Universal Coded Character Set (UCS) is a standard set of characters defined by the International Standard ISO/IEC 10646, Universal Coded Character Set (UCS), which is the basis of many character encodings, improving as characters from previously unrepresented writing systems are added. To integrate AI into computers and system software means to create a Unicode abstraction level, the Universal Coded Data Set (UCDS), as AI Unidatacode or EIS UCDS.

This particular article is a discussion about a recommendation to a given standard, that of SPARQL 1.1. None of this has been implemented yet, and as such represents more or less the muiings of a writer, rather than established functionality. Lately, I've been spending some time on the Github archives of the SPARQL 1.2 Community site, a group of people who are looking at the next generation of the SPARQL language. One challenge that has come up frequently has been the lack of good mechanisms in SPARQL for handling ordered lists, something that has proven to be a limiting factor in a lot of ways, especially given that most other languages have had the ability of handling lists and dictionaries for decades. As I was going through the archives, an answer occurred to me that comes down to the fact that RDF and SPARQL, while very closely related, are not in fact the same things.

An RDF statement expresses a relationship between two resources. The subject and the object represent the two resources being related; the predicate represents the nature of their relationship. The relationship is phrased in a directional way (from subject to object) and is called an RDF property. RDF allows us to communicate much more than just words; it allows us to communicate data that can be understood by machines as well as people. In this tutorial, we'll do the RDF Processing in Python with RDFLib.

The Editor Who Moves Theory Into the Mainstream

In her 2018 book "Double Negative: The Black Image and Popular Culture," Racquel Gates explores the disruptive potential of stereotypical or so-called negative images of Black people onscreen: Flavor Flav on VH1's "Flavor of Love," for example, and the stars of "ratchet" reality shows such as "Basketball Wives." These images, Gates argues, intervene against narratives of racial uplift that are overly tethered to white and middle-class definitions of respectability. In her acknowledgments section, Gates, a professor of film and media studies at Columbia, invokes a scene from "Love & Hip Hop," in which an aspiring singer tells an entertainment manager, "I want to be on your roster." Gates writes, "While I was tempted to quote this bit of dialogue to my editor, Ken Wissoker, during our first meeting, I erred on the side of caution." Wissoker, who has been an editor at Duke University Press since 1991, has a formidable roster, and one could easily imagine a reality show about junior scholars fighting for a chance to work with him.

Ontology of the everyday: PeopleReign's automation of IT and HR

The showy science projects get all the attention in the constant quest to automate everything. That includes gigantic natural language processing models such as OpenAI's GPT-3, which can complete sentences, answer questions, and even write poetry. For those making commercial software, there is a more mundane but perhaps equally valuable task, which is to figure out what facts a machine should have access to and make that actually have value for humans. "We don't apologize for the fact that some of this requires brute force," says Dan Turchin, chief executive and co-founder of PeopleReign, a San Jose, California software startup that is automating the handling of support calls for things such as IT and benefits. His software has compiled, over a period of five years, a kind of encyclopedia of more than five million "domain concepts," structured information relating to things such as employee benefits, requests for computer support, and all manner of other things customers or employees might request, culled from a billion examples such as IT tickets, wikis, chat transcripts, etc.

This course brings the software architecture skills required by an enterprise architect. In the lectures, we go through the engineering requirements and how to deal with gained information. Although the course is not about to show you how to build a web/desktop/mobile app with programming, but you have a great tool to create blueprint of your system. You will learn modern way to create your own design pattern or use common and useful architecture patterns. As it is said in the videos, by creating a blueprint of you system before starting to build it, you can then easily edit/modify/update/upgrade the system even after lot of years.

Federated Analytics is the latest feature added to Raven Distribution Framework that allows for the safe dynamic aggregation of statistics such as mean, variance, and standard deviation across data that is privately held on several clients. RDF's Ravop library now supports the creation of federated operations which developers can leverage to conduct analysis without directly observing a client's private data. Federated analytics is a new approach to data analysis in which key statistics like mean, variance, and standard deviation can be calculated across various private datasets without compromising privacy. It operates similarly to federated learning in that it runs local calculations over each client device's data and only makes the aggregated findings -- never any data from a specific device -- available to developers. Sensitive data like medical records, financial transactions, employee data, and others can be analyzed without leaving the premise.

The current release of Raven Distribution Framework (RDF v0.3)provides an easy to use library that allows developers to build mathematical algorithms or models and computes these operations by distributing them across multiple clients. This provides an increase in speed and efficiency when dealing with a large number of mathematical operations. Distributed Computing is the linking of various computing resources like PCs and smartphones to share and coordinate their processing power for a common computational requirement, such as the training of a large Machine Learning model. These resources or nodes communicate with a central server and in some cases with each other, such that each node receives some data and completes a subset of a task. These nodes can coordinate their computations to complete a large and complex computational requirement in a fast and efficient manner.