The year is 2029, and you wake up one morning living in a community called Hope, a dystopian dictatorship. "Everyone here wears the same outfit, lives the same repetitive routine, and is happy … For many, Hope is their entire universe. They are uninterested in the outside world. However, you are different--you have the ability to choose." This is how you are introduced to the game Name of the Will on Kickstarter.

'Hitman 3' is the grandest stage for your own stories, even as it tries to end its own

I've already talked at length about how the brilliant second mission alone, based on "Knives out" or Agatha Christie's "Poirot" murder mysteries, already justifies this game's existence. Chongqing is another highlight, a deliberate throwback to the old Hong Kong levels of the original PC release. It's a rain-drenched district that once again illustrates the kind of grand interconnectivity and neon sheen that "Cyberpunk" tried to achieve, and "Hitman" does effortlessly. Rain slithers off his leather-coated back as he waits outside his mark's building, assessing the place. In the meantime, he can open an umbrella and make small talk with a woman waiting for her girlfriend, just one of the series' many small but important storytelling flourishes to make each level feel more alive than you've seen in any action adventure.

New York – Critical digital rights battles over privacy, free speech and anonymity are increasingly being fought in video games, a growing market that is becoming a "new political arena," experts and insiders said on Thursday. With the industry set to more than double annual revenues to $300 billion by 2025, questions about how video game operators, designers and governments handle sensitive issues take on added urgency, said participants at RightsCon, a virtual digital rights conference. In recent months, a Hong Kong activist staged a protest against Beijing's rule inside a popular social simulator game called Animal Crossing, and a member of the U.S. Congress, Alexandria Ocasio-Cortez, campaigned in the game as well. The game Minecraft, meanwhile, has been used to circumvent censorship, with groups using it to create digital libraries and smuggle banned texts into repressive countries. "Video games have become this new political arena," said Micaela Mantegna, founder of GeekyLegal, an Argentinian group that focuses on tech policy.

'I care about Blizzard but the Hong Kong situation is dire': the gaming convention rocked by protest

Eric did not imagine this would be how he would spend his first BlizzCon. The 26-year-old World of Warcraft (WoW) player from Glendale, California, was at the annual fan event in Anaheim held by Blizzard, the games company behind global hits such as Warcraft, Overwatch and more. Each year, more than 35,000 people pack into the city's vast convention centre to play games, attend talks and share in their fandom. But at this year's event, held last weekend, there was a different feel. Instead of WoW cosplay, Eric was sporting a mask as worn by Hong Kong protesters to shield their faces from tear gas and facial recognition.

What to Know About Blizzard, Hong Kong and the Controversy Over Politics in Esports

Though video game culture is seldom a quiet, peaceful place, the uproar over Blizzard Entertainment punishing a popular gamer for showing support for Hong Kong protesters has shaken the whole industry. Ng Wai Chung, a Hearthstone player from Hong Kong who goes by the name "Blitzchung," championed the pro-democracy protests in his hometown that have raged for the past five months during his appearance on a post-game stream. And Blizzard, the developer and publisher of Hearthstone, quickly responded with blanket punishments for everyone involved. It's the latest example of an American company caught between business interests in China and western-world freedom of speech. Outrage over Blizzard's reaction swiftly came from players, industry titans and politicians.

Hong Kong Is the Latest Tripwire for Tech Firms in China

On Wednesday morning, Mark Kern sat down with his 12-year-old son to tell him the guild was breaking up. Kern had been involved with World of Warcraft from the very beginning--a game developer himself, he was the original team leader for the title when Blizzard Entertainment launched it in 2004--and was a steadfast player of WoW Classic, a throwback version of the game that launched in August. Over the weekend, an esports player for another Blizzard title, Hearthstone, had shouted a Hong Kong protest slogan on the game's official Taiwanese livestream; in response, Activision Blizzard suspended the player from high-level competitive play for a year and said it would not pay out his past winnings, claiming that he had violated rules barring acts that "offend[] a portion or group of the public." For Kern, who was born in Taiwan and spent time in Hong Kong, the studio he'd called home for nearly eight years had changed. He told his son that he had decided to cancel his WoW subscription, putting an end to their family tradition.

Blizzard Entertainment has banned a professional Hearthstone player who expressed support for protestors in Hong Kong during a live broadcast following the recent Asia-Pacific Grandmasters tournament in which the top pro players from the region participate -- and rescinded the money he won in the competition. Blizzard Entertainment, a U.S.-based video game developer that's a part of the entertainment company Activision Blizzard, is the publisher behind the digital collectible card game Hearthstone. During a post-game interview Sunday on the official Hearthstone Taiwan livestream, the player, Ng "Blitzchung" Wai Chung, pulled down a pro-democracy Hong Kong-style mask and shouted, "Liberate Hong Kong. Inven Global, a website that covers esports and gaming news, reports that Blitzchung shouted the phrase in Chinese. Blitzchung is from Hong Kong, according to Inven Global. A clip of the interview can be seen here. In response, Blizzard, a U.S.-based video game developer, banned Blitzchung from competing in Hearthstone tournaments for a year, starting on Oct. 5. The company said Blitzchung has been removed from the Grandmasters roster, and will not receive any prize money he earned during the Grandmasters season 2 tournament. According to a statement from Blizzard, Blitzchung violated a competition rule that bars players from doing anything that "brings you into public disrepute, offends a portion or group of the public, or otherwise damages Blizzard image." Blitzchung lost $10,000 in prize earnings, Bloomberg reports. In a statement to Inven Global, Blitzchung said he viewed his comments as a continuation of his participation in the protests. "As you know, there are serious protests in my country now. 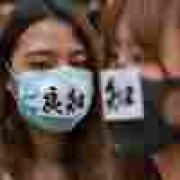 Blizzard Entertainment, the game developer behind hugely popular titles such as World of Warcraft and Overwatch, has banned a professional esports player from competing and taken away his prize money after he expressed support for Hong Kong's protest movement. Ng Wai Chung, who lives in Hong Kong and plays under the name Blitzchung, is one of the top players in the Asia-Pacific region for the online card deck game Hearthstone. Blitzchung made the comment on an official Hearthstone broadcast on Twitch, the video streaming platform, after his last game in the 2019 Hearthstone Asia-Pacific Grandmasters Tournament. Blitzchung wore a gas mask and dark goggles during that interview last Sunday, evoking the gear activists have worn during months of street protests. Toward the end of the segment, he shouted the popular protest chant, "Liberate Hong Kong, revolution of our times!"

HONG KONG – A unit of Activision Blizzard Inc. has punished a player for expressing support for Hong Kong's protest movement, the latest example of a U.S. company attempting to rein in speech that might displease the Chinese Communist Party. Blizzard Entertainment said it was banning Ng Wai Chung, also known as Blitzchung, from its professional Hearthstone esports competition for a year. Blizzard is also withholding money he had already earned in the company's top-tier Grandmasters tournament, which Ng said in a Twitter message cost him $10,000 of prize earnings. The move was triggered when Ng -- dressed in a gas mask and goggles in defiance of authorities' ban on face masks -- used a slogan in support of Hong Kong's pro-democracy protesters during a post-match interview. "After an investigation, we are taking the necessary actions to prevent similar incidents from happening in the future," Blizzard said in a statement.

Fox News Flash top headlines for July 21 are here. Check out what's clicking on Foxnews.com A well-known Hong Kong actor suffered a deep gash to his abdomen and a hand injury Saturday when a knife-wielding suspect attacked him onstage at a promotional event in China, according to a report. Simon Yam Tat-wah, 64, who appeared in the 2003 Hollywood film, "Lara Croft: Tomb Raider – The Cradle of Life," starring Angelina Jolie, was recovering after medical treatment and returning to Hong Kong, the South China Morning Post reported. ANGELINA JOLIE WAS A'HORRIBLE B---H' DURING NIGHTMARE DINNER, MODEL CLAIMS Simon Yam poses on the red carpet of the Hong Kong Film Awards in Hong Kong, April 3, 2016.