The Global Reach of CMU AI

As intractable problems accrue and grow, artificial intelligence is increasingly being called upon as part of the solution. Carnegie Mellon University AI researchers have stepped up to help surmount these obstacles where large data sets must be analyzed and patterns discovered to find answers. Last year, the National Science Foundation teamed up with the U.S. Department of Agriculture, the U.S. Department of Homeland Security, as well as corporate sponsors Accenture, Amazon, Google and Intel to provide $220 million in grants to create 11 new institutes specifically dedicated to AI research across a wide range of sectors. CMU's School of Computer Science and College of Engineering faculty will work with four of these new institutes: the AI Institute for Resilient Agriculture, the AI Institute for Collaborative Assistance and Responsive Interaction for Networked Groups, the AI Institute for Future Edge Networks and Distributed Intelligence, and the USDA-NIFA Institute for Agricultural AI for Transforming the Workforce and Decision Support. Learn more about these institutes and meet the researchers leading the work in our magazine, The Link.

From The Link: Lessons Learned From the SubT Challenge

As the countdown started, a boxy robot with four big wheels carrying a host of cameras, sensors, communication equipment, autonomy software and the computing power to make it all work together rolled down a ramp into a dark tunnel. It did not know where it was, what was ahead of it or where it was going. It was there to explore. Over the next hour, more robots followed: wheeled robots, drones and a dog-like quadruped. Team Explorer deployed eight robots for the final round of the Defense Advanced Research Projects Agency (DARPA) Subterranean, or SubT, Challenge -- a three-year competition during which teams from around the world raced to develop robotic systems that could autonomously operate in underground environments like caves, mines or subway stations for search and rescue missions. 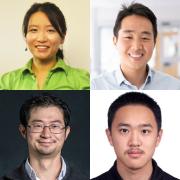 Four Carnegie Mellon University researchers in the School of Computer Science recently received Faculty Early Career Development Program awards from the National Science Foundation. The nearly $2.5 million will further research in deep learning, the safety of robots and autonomous systems, software engineering, and machine learning for healthcare. The NSF Faculty Early Career Development Program, commonly known as CAREER awards, is the foundation's most prestigious for young faculty members. Changliu Liu, an assistant professor in the Robotics Institute, was awarded nearly $745,000 for research to improve the safety of autonomous systems operating closely with humans. The work will develop a new algorithmic framework to assure the safety of robotic systems that optimizes performance when safety can be managed, anticipates and compensates for inevitable failures when it cannot, and learns from past mistakes.

Researchers sorted through 38 million tweets from more than 7 million users to better understand how climate change disinformation forms and spreads. Meeting a deaf woman while volunteering at a homeless shelter inspired a student to advocate for including sign language in language technology research. And subterranean search-and-rescue efforts could get a boost from the lessons of a fleet of robots and drones exploring the most remote corners of caves, tunnels and the underground world. The latest issue of The Link, the magazine of Carnegie Mellon University's School of Computer Science, is now online and features these stories and more. The magazine highlights the work of faculty and students from across the school.

Carnegie Mellon University President Farnam Jahanian highlighted the collaboration among government, academia and industry that has propelled Pennsylvania's autonomous vehicle (AV) industry forward during an event Wednesday outlining new legislation regulating AVs in the commonwealth. The legislation, unveiled at CMU's Mill 19 facility at Hazelwood Green by state Sen. Wayne Langerholc Jr., chairman of the Senate Transportation Committee; and Yassmin Gramian, secretary of the Pennsylvania Department of Transportation, would update Pennsylvania's policies around autonomous vehicles to mirror requirements in other states. Jahanian said that the global market for the autonomous vehicle industry will reach about $7 trillion dollars by 2050, with the potential to create countless jobs for workers of all education and skill levels. "While the economic impact of AV promises to be extraordinary, it also holds remarkable potential to enhance quality of life for citizens across the nation and contribute to solving significant societal challenges," Jahanian said, adding that benefits could include improvements to traffic safety and infrastructure maintenance and reductions in carbon emissions. He also noted that the technology's implications could extend to logistics, sustainability, medical care and expanding opportunities for independent living.

Pittsburgh Mayor Bill Peduto presented keys to the city to Carnegie Mellon University's Red Whittaker and Andrew Moore on Friday, calling the two "leaders of the fourth industrial revolution." Peduto, who will leave office at the end of the year after serving two terms as mayor and a career in city hall, said it has been an honor to work with Whittaker and Moore throughout much of the 2000s as Pittsburgh emerged as a hotbed of tech talent and grew its economy around robotics, autonomy, computer science, machine learning and artificial intelligence. The mayor described Whittaker and Moore as humble men who love Pittsburgh and chose to stay in the city to train top-level scientists and develop transformative technologies. They created new industries that not only changed Pittsburgh but changed the world," Peduto said. "They changed Pittsburgh beyond its economy and brought it back to the world stage."

This week, TechCrunch is turning its spotlight on Pittsburgh, Pennsylvania with interviews, profiles, and an event featuring the outgoing mayor, CMU's President, and local startups. The Rust Belt city has spent much of the past decade working to shed the image that arrived in the wake of the deindustrialization of the 1970s and 80s. Courtesy of world class universities like Carnegie Melon and the University of Pittsburgh, the Steel City has transformed itself into a vibrant startup ecosystem and a world class environment for robotics, AI, autonomous driving and other high-tech companies. Ahead of tomorrow's event, TechCrunch spoke to Bill Peduto, who has served as Pittsburgh's Mayor since 2014, a role that has involved overseeing much of that transformation. The Mayor spoke on his efforts over the past half-dozen years, which will culminate in January when he leaves office.

The Pittsburgh space robotics company Astrobotic has delivered its CubeRover to NASA's Kennedy Space Center in Florida, where the robot will undergo a battery of mobility and drop tests in a simulated lunar terrain. Co-developed by Astrobotic and Carnegie Mellon University with input from a NASA Kennedy team, CubeRover is a small, light robotic rover designed as an affordable mobile platform for scientific instruments and other payloads to operate on the surface of the moon. "Because our CubeRover is so light -- in the four-kilogram range -- it dramatically reduces flight cost, making the moon more accessible to more customers," said Mike Provenzano, Astrobotic's director of planetary mobility. CubeRover is a commercial version of Iris, a CMU-built rover scheduled to land on the moon as early as next summer.

The effectiveness of traditional traffic prediction methods is often extremely limited when forecasting traffic dynamics in early morning. The reason is that traffic can break down drastically during the early morning commute, and the time and duration of this break-down vary substantially from day to day. Early morning traffic forecast is crucial to inform morning-commute traffic management, but they are generally challenging to predict in advance, particularly by midnight. In this paper, we propose to mine Twitter messages as a probing method to understand the impacts of people's work and rest patterns in the evening/midnight of the previous day to the next-day morning traffic. The model is tested on freeway networks in Pittsburgh as experiments. The resulting relationship is surprisingly simple and powerful. We find that, in general, the earlier people rest as indicated from Tweets, the more congested roads will be in the next morning. The occurrence of big events in the evening before, represented by higher or lower tweet sentiment than normal, often implies lower travel demand in the next morning than normal days. Besides, people's tweeting activities in the night before and early morning are statistically associated with congestion in morning peak hours. We make use of such relationships to build a predictive framework which forecasts morning commute congestion using people's tweeting profiles extracted by 5 am or as late as the midnight prior to the morning. The Pittsburgh study supports that our framework can precisely predict morning congestion, particularly for some road segments upstream of roadway bottlenecks with large day-to-day congestion variation. Our approach considerably outperforms those existing methods without Twitter message features, and it can learn meaningful representation of demand from tweeting profiles that offer managerial insights.

This USER Workshop was convened with the goal of defining future research directions for the burgeoning intelligent agent research community and to communicate them to the National Science Foundation. It took place in Pittsburgh Pennsylvania on October 24 and 25, 2019 and was sponsored by National Science Foundation Grant Number IIS-1934222. Any opinions, findings and conclusions or future directions expressed in this document are those of the authors and do not necessarily reflect the views of the National Science Foundation. The 27 participants presented their individual research interests and their personal research goals. In the breakout sessions that followed, the participants defined the main research areas within the domain of intelligent agents and they discussed the major future directions that the research in each area of this domain should take.