Artificial intelligence can learn to play a complex war game 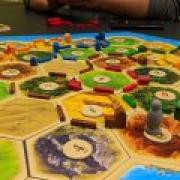 In the world of game theory, we refer to games such as Catan, Risk, and Civilization 6 as large-scale strategy games. The defining trait of these games is their massive number of components and how they interact. Games often give players the option to compete against the computer. These computer players are called artificial intelligence (AIs). The purpose of these AIs is to give players an equal challenge.

How Games Workshop grew to become more profitable than Google

It started in a small flat in west London, with three friends selling board games and a fanzine via mail order; now Games Workshop is worth more than Marks & Spencer and Asos and is more profitable than Google. This week the Nottingham-based company, which produces the Warhammer fantasy role-playing brand, announced all of its workers would get a £5,000 bonus after sales and profits surged during the pandemic. Run by Kevin Rountree, a former accountant who shuns the press, the firm counts Ed Sheeran, the Fast & Furious actor Vin Diesel and Superman among its legion of fans – the British actor Henry Cavill, who plays the comic book hero on screen, revealed his love of Warhammer in an Instagram post during lockdown last year, in which he confessed to an addiction to collecting Games Workshop's tiny figurines, describing them as "plastic crack". This article includes content provided by Instagram. We ask for your permission before anything is loaded, as they may be using cookies and other technologies.

Classified details of the British Army's main battle tank, Challenger 2, have been leaked online after a player in a tank battle video game disputed its accuracy. The player, who claimed to have been a real life Challenger 2 tank commander and gunnery instructor, disputed the design of the tank in the popular combat video game "War Thunder", arguing it needed changing. He claimed game designers had failed to "model it properly". To support his argument the player posted pages from the official Challenger 2 Army Equipment Support Publication – a manual and maintenance guide. Excerpts from the documents, some of which were heavily redacted, appeared to show some documents had "UK RESTRICTED" label crossed out and a stamp of "UNCLASSIFIED" added, the website UK Defence Journal reported. The military's new gadget works by amplifying light that's already out there, either from the moon, stars or sources on the ground. The device senses tiny amounts of photons reflected off seemingly dark objects. Then, the photons pass over an internal surface engineered to convert light into electrons. The electrons are amplified by striking a quarter-sized glass plate that has millions of tiny holes in it. Then, they pass a screen coated with phosphor, a fluorescent substance, to create an image.

The US Army's new'Enhanced Night Vision' technology makes fighting in darkness look like a video game for soldiers. The Lancer Brigade, a US military combat unit, posted video of the high-tech equipment, which shows people and objects outlined in a glowing white light, to its Twitter account last month. The Enhance Night Vision Goggle-Binoculars replaces the traditional green night vision experience to help soldiers see more effectively in low light. The Army says its new device uses white phosphor tubes instead of the traditional green phosphor, which it says offers troops better contrast to see enemies, equipment and weapons. The new goggles include a set of binoculars and an augmented reality system and soldiers will also be able to use them to look through the scope of a weapon remotely.

Robots can outwit us on the virtual battlefield, so let's not put them in charge of the real thing

Artificial intelligence developer DeepMind has just announced its latest milestone: a bot called AlphaStar that plays the popular real-time strategy game StarCraft II at Grandmaster level. This isn't the first time a bot has outplayed humans in a strategy war game. In 1981, a program called Eurisko, developed by artificial intelligence (AI) pioneer Doug Lenat, won the US championship of Traveller, a highly complex strategy war game in which players design a fleet of 100 ships. Eurisko was consequently made an honorary Admiral in the Traveller navy. The following year, the tournament rules were overhauled in an attempt to thwart computers.

Why is the US military building a vast AI system and how will it change the battlefield of the future?

The Pentagon is set to award a $10bn "war cloud" contract to a technology company next month, with both Amazon and Microsoft competing for the chance to build a military-grade AI computing system. The Joint Enterprise Defence Infrastructure (Jedi) plan faces a number of obstacles before the US defence department makes its decision next month, not least from within the companies' own work forces. Microsoft employees published an open letter on Medium last year, pleading the tech giant to not bid on the Jedi contract. "Many Microsoft employees don't believe that what we build should be used for waging war," they wrote. We'll tell you what's true.

For a flagship single-person shooter, Battlefield V didn't exactly set the sales chart alight. But EA Dice keeps cranking out the updates to keep devotees happy, while everyone else waits for its incoming battle royale mode. And so we come to Chapter 2: Lightning Strikes Update #3, which is out now. The biggest change, aside from a new co-op mode (we'll get to that later), is support for NVIDIA's performance-boosting DLSS tech and optimized ray-tracing for GeForce RTX graphics cards. Deep Learning Super Sampling (DLSS) is essentially a rendering technique that's designed to deliver better performance and more pleasing visuals.