Human beings, who live by the day and make decisions instantly, have become increasingly dependent on algorithms during the pandemic as machines turn all their inclinations into predictions. Artist Refik Anadol has brought a different artistic interpretation to this addiction with his "Machine Memories: Space" art exhibition, which has recently opened in the Turkish metropolis of Istanbul. Anadol's solo exhibition has also attracted the great attention of giant technology companies around the world. The manager of the Massachusetts Institute of Technology (MIT) Media Lab, which I visited many years ago at the invitation of Turkey's leading information and communication technologies company Türk Telekom, described the success criteria as "making an impact." Now I have met Anadol, an artist who has created an impact all over the world and is admired by data companies.

Uber C.E.O. Backtracks After Comparing Khashoggi's Killing to an Accident

Mr. Khashoggi, a critic of the Saudi government who wrote for The Washington Post and was a resident of Virginia, was brutally murdered in October 2018 after he entered a Saudi consulate in Istanbul. The C.I.A. has concluded that the Saudi crown prince, Mohammed bin Salman, ordered the journalist's killing. As Axios journalists noted in their interview with Mr. Khosrowshahi, Saudi Arabia is Uber's fifth-largest shareholder, and Yasir al-Rumayyan, the governor of Saudi Arabia's Public Investment Fund and the recently named chairman of the state-owned oil giant Saudi Aramco, sits on Uber's board. In the interview, Mr. Khosrowshahi compared the death of Mr. Khashoggi to the death of a woman who was struck by one of Uber's autonomous vehicles last year. Karen Attiah, an opinions editor for The Washington Post who worked with Mr. Khashoggi, said in a series of tweets on Monday that Mr. Khosrowshahi was "running cover for the Saudi government" and comparing the murder to a technology glitch.

Dara Khosrowshahi, the chief executive of Uber, has attempted to limit the damage after calling the murder of the journalist Jamal Khashoggi "a mistake" similar to a fatal accident that occurred during tests of his company's self-driving car. Khashoggi, a Saudi national resident in the US, and a severe critic of the Saudi regime who wrote for the Washington Post, was murdered in Istanbul last year after visiting the Saudi Arabian consulate there. His body was dismembered and disposed of. His death has been described by Agnès Callamard, the UN special rapporteur on extrajudicial killings, as a "deliberate, premeditated execution" that warrants further investigation into the responsibility of the Saudi crown prince, Mohammed bin Salman. The prince is a key US ally close to Jared Kushner, Donald Trump's son-in-law and chief adviser. 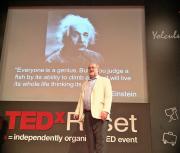 Yesterday I was honored to be one of the featured speakers at the TEDxReset Conference in Istanbul, Turkey where I predicted that over 2 billion jobs will disappear by 2030. Since my 18-minute talk was about the rapidly shifting nature of colleges and higher education, I didn't have time to explain how and why so many jobs would be going away. Because of all of the questions I received afterwards, I will do that here. If you haven't been to a TEDx event, it is hard to confer the life-changing nature of something like this. Ali Ustundag and his team pulled off a wonderful event.

WASHINGTON – Congress passed an aviation bill Wednesday that attempts to close gaps in airport security and shorten screening lines, but leaves thornier issues unresolved. The bill also extends the Federal Aviation Administration's programs for 14 months at current funding levels. It was approved in the Senate by a vote of 89 to 4. The House had passed the measure earlier in the week and it now goes to President Barack Obama, who must sign the bill by Friday when the FAA's current operating authority expires to avoid a partial agency shutdown. Responding to attacks by violent extremists associated with the Islamic State group on airports in Brussels and Istanbul, the bill includes an array of provisions aimed at protecting "soft targets" outside security perimeters. Other provisions designed to address potential "insider threats" would toughen vetting of airport workers and other employees with access to secure areas, expand random employee inspections and require reviews of perimeter security.

Here are some story lines I don't want you to miss today. Tikrit, Ramadi, Fallujah: Those are among the cities that a U.S.-led coalition has recently retaken from Islamic State. Baghdad, Dhaka, Istanbul, Medina: These are among the cities that have suffered terror attacks claimed by or linked to Islamic State. Terror experts say it's part of a shift in strategy by the extremists to focus less on building a caliphate and more on spreading terror worldwide. Read on to see how ISIS is putting its own twist on the Al Qaeda model.

ISTANBUL – The Turkish military said Monday that artillery shelling and drone attacks by the U.S.-led coalition have struck Islamic State positions in Syria and killed a total of 63 militants. The state-owned Anadolu Agency said the strikes took out multiple rocket launchers and gun positions. Four drones deployed from the Incirlik air base, a launching point for U.S.-led coalition forces in southern Turkey, took part in the operation and killed 29 militants. The airstrikes were informed by intelligence gathered by the Turkish army, the private Dogan news agency reported. The remaining 34 Islamic State fighters were "neutralized" by rocket fire and artillery shelling from Turkey, according to Anadolu Agency.