The desk where I work in San Francisco overlooks Cesar Chavez Street, a four-lane thoroughfare that starts at the eastern edge of the city, in the Bayview, and runs west at a jag for about three miles. Formerly known as Army Street, it is a largely charmless artery. In recent years, owing to procrastination, distraction, or general malaise, I've often found myself staring out at it, idly watching the traffic. There is nothing very unusual to see except for the Waymo cars--white, electric Jaguar S.U.V.s, kitted out with sensors and cameras, their rooftop LIDARs spinning. Self-driving cars are not a fixture of most American cities, at least not yet.

Without Driver, But With Coyotes: First Ride in a Cruise Robotaxi Through San Francisco

Tuesday night was the night. I rode in one of Cruise's fleet of driverless robotaxis in San Francisco for the first time. Thanks to an Austrian friend who already had access to the Cruise app, we hopped into one of the driverless cars at around 11 p.m., went out for a few drinks, and then headed back in another Cruise robotaxi, again driverless. Here is the first video with some driverless Cruises we saw while waiting for ours. Also watch out for minute 7:56 to see the coyotes.

Self-driving car pulled over in San Francisco, confounding police. 'Ain't nobody in it.'

The first words many police officers use when pulling over a vehicle weren't applicable last week when San Francisco police pulled over – or attempted to pull over – an autonomous vehicle without a person inside. A video that has gone viral shows a San Francisco police officer saying to his partner that there "ain't nobody in it." The vehicle, a self-driving car without a steering wheel for the San Francisco-based company Cruise, was being pulled over for driving without headlights at night. The Cruise car's digitalized system, however, determined it was being pulled over for going a different speed limit. Once the officer confusingly checked the vehicle and went to talk to his partner, the vehicle took off through another intersection at a seemingly more acceptable speed before being pulled over again. 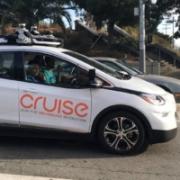 San Francisco – San Francisco police faced an unprecedented problem recently when an officer stopped a car that was driving at night with no headlights on, only to discover there was no one inside. The vehicle, it turned out, was a self-driving car, and the police officer's encounter was captured on film by a passerby, who posted the footage on social media. The clip, showing bemused officers circling the vehicle and peering through its window for several minutes, has been shared so widely that Cruise, the company that owns the vehicle, reacted on Twitter to explain what had happened. It said the self-driving car "yielded to the police vehicle, then pulled over to the nearest safe location for the traffic stop, as intended. An officer contacted Cruise personnel and no citation was issued."

A video recently posted online shows what happens when police try to apprehend an autonomous vehicle – only to find nobody inside. Police in San Francisco stopped a vehicle operated by Cruise, an autonomous car company backed by General Motors, in a video posted on 1 April. Officers approached the car, which had been driving without headlights, only to find it was empty. "Ain't nobody in it – this is crazy," a bystander can be heard saying in the video. The car then speeds away to the other side of the intersection, leaving the police behind.

Confused cops pulled over a driverless car. It drove off.

In our unenvied contemporaneity, it's apparently completely normal to watch police officers try to pull over autonomous cars for seemingly not having their front lights on. In an Instagram video posted on April 2, a group of San Francisco police officers are seen stopping an autonomous vehicle operated by Cruise and scrambling to open its doors. The video then shows the car driving off and parking some 30 meters ahead.

Welcome to the future, in which police officers have to learn to deal with self-driving cars which may not always cooperate. An Instagram video published on April 2 shows police officers in San Francisco pulling over an autonomous vehicle operated by Cruise, likely because its front lights are off. The video shows the officers walking around the fully driverless vehicle, trying to open its doors before giving up. Then, the vehicle takes off and drives another 30 meters or so before stopping after the next intersection. The police follow, and then we see the officers once again trying to open the driverless car's doors and perhaps turn on its lights.

The rides are free and currently only available to Waymo employees. The Alphabet Inc. unit since 2017 has been operating autonomous cars in suburban Phoenix, which is a much less challenging traffic environment. In 2020, it opened rides up to the public in Chandler, Ariz.--which has a population of less than 300,000--and took away drivers. Waymo's latest move comes nearly two months after its biggest competitor, Cruise, a subsidiary of General Motors Co., started offering driverless rides to the public in San Francisco. The rides are also free and only available at night, from 10:30 p.m. to 5 a.m.

How Drive.ai Is Mastering Autonomous Driving with Deep Learning

Among all of the self-driving startups working towards Level 4 autonomy (a self-driving system that doesn't require human intervention in most scenarios), Mountain View, Calif.-based Drive.ai's Drive sees deep learning as the only viable way to make a truly useful autonomous car in the near term, says Sameep Tandon, cofounder and CEO. "If you look at the long-term possibilities of these algorithms and how people are going to build [self-driving cars] in the future, having a learning system just makes the most sense. There's so much complication in driving, there are so many things that are nuanced and hard, that if you have to do this in ways that aren't learned, then you're never going to get these cars out there." It's only been about a year since Drive went public, but already, the company has a fleet of four vehicles navigating (mostly) autonomously around the San Francisco Bay Area--even in situations (such as darkness, rain, or hail) that are notoriously difficult for self-driving cars.

Software can analyse millions of static photos of city streets taken atop cars and construct a realistic 3D model that could be used to create immersive maps or even train driverless cars safely in a virtual environment. Block-NeRF was created by a team of researchers at driverless car company Waymo and Google Research, which are both owned by Alphabet. The tool uses vast numbers of photos taken by cameras mounted atop Waymo's autonomous cars and builds numerous small 3D models, each covering just over one city block.