Once an industry with long development cycles, the automotive space is being upended by China's tech giants. One can hardly keep up with all the new electric vehicle brands that come out of the country nowadays. Jidu, an electric carmaking company founded by Baidu and its Chinese auto partner Geely only a year ago, said Wednesday it has banked nearly $400 million in a Series A funding round. The new injection, bankrolled by Baidu and Geely, which owns Volvo, is a boost to the $300 million initiation capital that Jidu closed last March. The proceeds will speed up Jidu's R&D and mass production process and allow it to showcase its first concept "robocar" -- which it classifies as an automotive robot rather than a car -- at the Beijing auto show in April.

What you need to know about China's AI ethics rules

Late last year, China's Ministry of Science and Technology issued guidelines on artificial intelligence ethics. The rules stress user rights and data control while aligning with Beijing's goal of reining in big tech. China is now trailblazing the regulation of AI technologies, and the rest of the world needs to pay attention to what it's doing and why. The European Union had issued a preliminary draft of AI-related rules in April 2021, but we've seen nothing final. In the United States, the notion of ethical AI has gotten some traction, but there aren't any overarching regulations or universally accepted best practices.

China's 'little giants' are its latest weapon in tech war with U.S.

In today's China, behemoths like Alibaba Group Holding Ltd. and Tencent Holdings Ltd. are out of favor, but "little giants" are on the rise. That's the designation for a new generation of startups that have been selected under an ambitious government program aimed at fostering a technology industry that can compete with Silicon Valley. These often-obscure companies have demonstrated they're doing something innovative and unique, and they're targeting strategically important sectors like robotics, quantum computing and semiconductors. Wu Gansha won the little giants title for his autonomous driving startup after a government review of his technology. That gave the Beijing company, Uisee, an extra dose of credibility and financial benefits.

"South of the Huai river few geese can be seen through the rain and snow." In classical Chinese this verse is a breakthrough--not in literature but in computing power. The line, composed by an artificial intelligence (ai) language model called Wu Dao 2.0, is indistinguishable in metre and tone from ancient poetry. The lab that built the software, the Beijing Academy of Artificial Intelligence (baai), challenges visitors to its website to distinguish between Wu Dao and flesh-and-blood 8th-century masters. Anecdotal evidence suggests that it fools most testers.

"SOUTH OF THE Huai river few geese can be seen through the rain and snow." In classical Chinese this verse is a breakthrough--not in literature but in computing power. The line, composed by an artificial intelligence (AI) language model called Wu Dao 2.0, is indistinguishable in metre and tone from ancient poetry. The lab that built the software, the Beijing Academy of Artificial Intelligence (BAAI), challenges visitors to its website to distinguish between Wu Dao and flesh-and-blood 8th-century masters. Anecdotal evidence suggests that it fools most testers.

Chinese artificial intelligence chipmaker Axera Technology has raised CNY800 million (USD126 million) from renowned investors such as food delivery giant Meituan in its second round of financing within the past six months. Several investment institutions, including Qiming Venture Partners and GGV Capital, as well as Beijing-based Meituan joined Axera's Series A round of funding, its fourth fundraiser, the Beijing-headquartered startup said in a statement on its WeChat account today. The firm intends to use the proceeds to attract top industry talent and to expand its business, it added. The global demand for AI chips is growing explosively, said Axera. The market scale is expected to grow to USD72.6 billion by 2025 after reaching USD17.5 billion last year, according to data from AI research institute Tractica.

China's robotaxis charged ahead in 2021 – TechCrunch

Autonomous driving startups in China are in an arms race to put passengers in their machine-driven vehicles. Every few weeks, news arrives that another major player has got the greenlight to launch a new pilot program or a small-scale service. These press releases, often dotted with regulatory jargon and flowery language to aggrandize the companies' progress, can be confusing. That's why we put together this post summarizing the progress of China's major robotaxi operators -- AutoX, Baidu, Deeproute.ai, Didi, Momenta, Pony.ai and WeRide -- in 2021 while trying to parse what their announcements actually mean.

A large robotic arm on China's space station has successfully grasped and maneuvered a cargo spacecraft in a crucial test ahead of upcoming module launches. The 33-foot-long (10 meters) robotic arm on the Tianhe module of China's new Tiangong space station took hold of the Tianzhou 2 supply ship and moved it around 20 degrees, before returning it to the forward port on Tianhe's docking hub. The 47-minute operation began at 5:12 p.m. EST on Wednesday, Jan. 5 (2212 UTC, 6:12 am Beijing time Jan. 6) to test the procedures and equipment needed for the addition and movement of larger space station modules. The successful trial was vital to the China National Space Administration's plan to complete construction of its space station later this year. China's next space station modules, named Mengtian and Wentian, are scheduled to launch on separate Long March 5B rockets in the coming months and dock with the orbiting Tianhe. The robotic arm will then need to grasp the modules, each with a mass of more than 44,100 pounds (20,000 kilograms), and maneuver them from the forward port to radial ports.

BEIJING, Dec 27 (Reuters) - China's BYD (002594.SZ) and autonomous driving startup Momenta have established a 100 million yuan ($15.7 million) joint venture to deploy autonomous driving capabilities across certain BYD car model lines, according to a Momenta statement and a person familiar with the matter. The new venture, called DiPi Intelligent Mobility Co and located in Shenzhen, combines BYD's capabilities as an automaker with Momenta's experience in intelligent driving, said the statement on Monday. BYD has invested 60 million yuan in the venture while Beijing-based Momenta is investing 40 million yuan, the person said. The person said the initial scope of work will include deploying "Level 2 plus" autonomous driving capability across some vehicle model lines. Level 2 semi-autonomous cars have technology that can take care of nearly all aspects of driving, from steering to acceleration and braking, but the driver needs to be ready to intervene if needed.

China calls on nuclear-armed nations to focus on AI, space 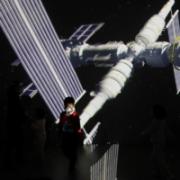 Beijing is calling on the world's nuclear powers to expand discussions on global security to include emerging threats, following a rare multilateral pledge to temper the risks of nuclear war. Fu Cong, director-general of the Chinese Foreign Ministry's Arms Control Department, told reporters in Beijing on Tuesday that the so-called P5 nations -- China, France, Russia, the U.S. and U.K. -- should talk "more directly" about global security. "Strategic stability goes beyond nuclear," he said. "Our idea is to expand the subject of the P5 process so we could discuss not only the nuclear issues, but also other issues related to strategic stability, including outer space, missile defense, even AI and other emerging technologies." The briefing took place after the five nations -- all permanent members of the United Nations Security Council -- issued a joint statement Monday pledging to dial back the risk of a nuclear conflict.