"Today's expert systems deal with domains of narrow specialization. For expert systems to perform competently over a broad range of tasks, they will have to be given very much more knowledge. ... The next generation of expert systems ... will require large knowledge bases. How will we get them?"
– Edward Feigenbaum, Pamela McCorduck, H. Penny Nii, from The Rise of the Expert Company. New York: Times Books, 1988.

What is AI Winter? Definition, History and Timeline

The trajectory of AI has been marked by several winters since its inception in 1955 in a formal proposal made by computer scientist and AI researcher Marvin Minksy and several others. Between 1956 and 1974, the U.S. Defense Advanced Research Projects Agency (DARPA) funded AI research with few requirements for developing functional projects. After the initial hype generated by these AI projects, a quiet decade followed where interest and support gradually tapered off. In 1969, Minsky and another AI researcher, Seymour Papert, published a book called Perceptrons, which pointed out the flaws and limitations of neural networks. This publication influenced DARPA to withdraw its previous funding of AI projects. Entity linking (EL) is the process of automatically linking entity mentions in text to the corresponding entries in a knowledge base (a database of facts that relate entities), such as Wikidata. For example, in the diagram below, we would aim to link the mention "England" to the entity "England Football Team" as opposed to the entity "England" the country. Entity linking is a common first step in natural-language-processing (NLP) applications such as question answering, information extraction, and natural-language understanding. It is critical for bridging unstructured text with knowledge bases, which enables access to vast amounts of curated data. Current EL systems exhibit great performance on standard datasets, but they have several limitations when deployed in real-world applications.

Ever spend much too long trying -- and failing -- to rediscover articles you've partially read? This reporter's been there, and it seems I'm not the only one. According to 2021 Carnegie Mellon study on browser tab usage, many participants admitted to feeling overwhelmed by the amount of tabs they kept open but were compelled not to close them out of fear of missing out on valuable information. Samiur Rahman is familiar with the feeling -- so much so that he co-created a product, Heyday, to alleviate it. Launched in 2021, Heyday is designed to automatically save web pages and pull in content from cloud apps, resurfacing the content alongside search engine results and curating it into a knowledge base. Investors include Spark Capital, which led a $6.5 million seed round in the company that closed today.

The Role of Symbolic AI and Machine Learning in Robotics 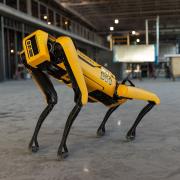 Robotics is a multi-disciplinary field in computer science dedicated to the design and manufacture of robots, with applications in industries such as manufacturing, space exploration and defence. While the field has existed for over 50 years, recent advances such as the Spot and Atlas robots from Boston Dynamics are truly capturing the public's imagination as science fiction becomes reality. Traditionally, robotics has relied on machine learning/deep learning techniques such as object recognition. While this has led to huge advancements, the next frontier in robotics is to enable robots to operate in the real world autonomously, with as little human interaction as possible. Such autonomous robots differ to non-autonomous ones as they operate in an open world, with undefined rules, uncertain real-world observations, and an environment -- the real world -- which is constantly changing.

Fox News Flash top headlines are here. Check out what's clicking on Foxnews.com. The Supreme Court Thursday ruled 6-3 that New York's regulations that made it difficult to obtain a license to carry a concealed handgun were unconstitutionally restrictive, and that it should be easier to obtain such a license. The existing standard required an applicant to show "proper cause" for seeking a license, and allowed New York officials to exercise discretion in determining whether a person has shown a good enough reason for needing to carry a firearm. Stating that one wished to protect themselves or their property was not enough.

Why Symbolic AI Is Extremely Critical for Business Operations?

Even as many businesses experiment with AI using rudimentary machine learning (ML) and deep learning (DL) models, a new sort of AI called symbolic AI is emerging from the lab, with the potential to transform both AI's function and its relationship with its human overseers. There are two groups in AI history: symbolic AI and non-symbolic AI, each of which takes a distinct approach to build an intelligent system. The symbolic method tried to create an intelligent system with explainable actions based on rules and knowledge, whereas the non-symbolic method aimed to create a computational system modeled after the human brain. The ultimate objective of computer science is to create an AI system capable of thinking, logic, and learning. Most AI systems today, on the other hand, only have one of the two abilities: learning or reasoning.

Artificial Intelligence is proving its prominence in every industry out there and the healthcare industry is no different. From patient care to Administrative processes AI has huge potential in the healthcare industry. There are many research studies suggesting that AI can perform as well as or better than humans at key healthcare tasks. We have seen robots performing surgeries or assisting doctors with more precision and flexibility. Algorithms are outperforming radiologists in detecting dangerous tumors and advising researchers on how to build cohorts for expensive clinical trials.