The latest iteration of Amazon's battery-powered Ring doorbell adds a new feature to capture the early details of events most competitors would miss without needing to be plugged in. It tops Ring's battery-powered range, which starts at £89. The look and basic function of the Doorbell 4 is very similar to Ring's older models. It has a camera with night vision, motion sensors and a large doorbell button. When someone pushes the button Ring's signature chime plays and an alert is sent to your phone. You can view a live feed and speak through the doorbell using the app from anywhere with internet. 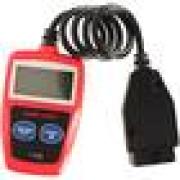 When your dashboard lights up, or your car starts running rough, any number of things could be wrong. If you're mechanically inclined and have the right tools, you could save yourself a lot of money by diagnosing and working on your car yourself. One tool that can make the diagnosis easier and won't break the bank is an OBD2 scanner and car code reader. A scanner and car code reader that plugs directly into the OBD2 port in your car to access the onboard computers and systems. The scanner will read the trouble codes put out by the vehicle to help you diagnose the problem so you can fix it and get back on the road.

The early 2000s were not a good time for technology. After entering the new millennium amid the impotent panic of the Y2K bug, it wasn't long before the Dotcom Bubble was bursting all the hopes of a new internet-based era. Fortunately the recovery was swift and within a few years brand new technologies were emerging that would transform culture, politics and the economy. They have brought with them new ways of connecting, consuming and getting around, while also raising fresh Doomsday concerns. As we enter a new decade of the 21st Century, we've rounded up the best and worst of the technologies that have taken us here, while offering some clue of where we might be going. There was nothing much really new about the iPhone: there had been phones before, there had been computers before, there had been phones combined into computers before. There was also a lot that wasn't good about it: it was slow, its internet connection barely functioned, and it would be two years before it could even take a video.

The magical realism of Tesla

YOU HAVE to hand it to the "technoking". For all his impish self-aggrandisement, mockery of deadlines, baiting of regulators and soon-to-be sideline as a "Saturday Night Live" comedy host, Elon Musk is deadly serious about technology. So serious, in fact, that as he was discussing the nitty-gritty of neural networks on an earnings call on April 26th, Tesla's boss did not miss a beat when what sounded like his infant son let out a wail in the background. The electric-car maker's record net profit of $438m in the first quarter, the seventh straight in the black, came as an afterthought. Your browser does not support the audio element.

Sonos Roam review: the portable speaker you'll want to use at home too

Sonos's new smaller and cheaper Roam portable speaker is one that won't end up relegated to a drawer collecting dust as it sounds great at home too. The £159 Roam joins the much bigger and heavier £399 Move as the second of firm's battery-powered models and proves itself as one of the best options in a saturated market. The speaker has both wifi and Bluetooth and is triangular in shape, like a Toblerone, but only about the length of a 500ml bottle. It weighs 430g so won't drag down a bag and is easy to grip for carrying about the house. The front is a metal mesh, the back is high-quality mat plastic and the end caps are rubber to help absorb impacts if you drop it.

"LG's strategic decision to exit the incredibly competitive mobile phone sector will enable the company to focus resources in growth areas such as electric vehicle components, connected devices, smart homes, robotics, artificial intelligence and business-to-business solutions, as well as platforms and services," it said in a statement.

After US sanctions, Huawei turns to new businesses to boost sales

Six months after the Trump administration dealt a crushing blow to Huawei Technologies Co.'s smartphone business, the Chinese telecommunications giant is turning to less glamorous alternatives that may eventually offset the decline of its biggest revenue contributor. Among its newest customers is a fish farm in eastern China that's twice the size of New York's Central Park. The farm is covered with tens of thousands of solar panels outfitted with Huawei's inverters to shield its fish from excessive sunlight while generating power. About 370 miles to the west in coal-rich Shanxi province, wireless sensors and cameras deep beneath the earth monitor oxygen levels and potential machine malfunctions in mine pit -- all supplied by the tech titan. And next month, a shiny new electric car featuring its lidar sensor will debut at China's largest auto show.

A group of researchers from Stanford have developed a way to combine processors and memory on multiple hybrid chips to allow AI to run on battery-powered devices such as smartphones and tablets. The team believes that all manner of battery-power electronics would be smarter if they could run AI algorithms. The problem is efforts to build AI-capable chips for mobile devices have run up against something known as the "memory wall." The memory wall is the name for the separation of data processing and memory chips that have to work together to meet the computational demands of AI. Computer scientist Subhasish Mitra says the transactions between processors and memory can consume 95 percent of the energy needed to perform machine learning and AI, severely limiting battery life.

While CES was a bit different this year, we still managed to check out a number of inspiring new devices, apps and services. While we acknowledged the most promising tech in Engadget's Best of CES awards, there remain a bunch of gadgets that didn't make the list that will be worth checking out when they actually hit shelves later this year. Things like HP's new Dragonfly laptops, TCL's 8K TVs and Cowin's two-piece soundbar are all things to look forward to as 2021 progresses (and some are even available already). Here are some of the CES 2021 gadgets you may have missed this week. Cherlynn Low found a lot to like about last year's HP Dragonfly laptop: it was lightweight at 2.2 pounds, had a great battery life and an attractive design.

The upcoming Cadillac Lyriq SUV is the first electric car for the Cadillac car brand, but it's the reimagined dashboard display spanning 33 inches across that attracts the most attention. Mercedes-Benz also has a massive 56-inch Hyperscreen that will be available soon in its first EV. These car screens and others introduced at the annual tech show CES feature a new user interface that looks more like a well-rendered video game than an infotainment display to turn up the heat or play a podcast. Past CES shows used to wow with announcements about bigger and bigger dashboard screens, but now it's about what's on them. The Lyriq's 33-inch LED display stands out on its own, but its graphics feel almost too sharp for a screen stuck in a car.