Here's when Apple will hold its next event, according to Siri

Prompt Siri and ask, "When is the next Apple event?" Follow along as we break down each iPad model. "The special event is on Tuesday, April 20, at Apple Park in Cupertino, Calif. You can get all the details on Apple.com." I've asked Siri the same question on two different iPhones, an Apple Watch, and an iPad Pro this morning, but they all failed to give me more than a generic answer to check Apple's website. However, when I asked Siri on my HomePod, it spilled the beans.

This post contains a list of the AI-related seminars that are scheduled to take place between 14 April and 31 May 2021. All events detailed here are free and open for anyone to attend virtually. Machine learning for medical image analysis and why clinicians are not using it Speaker: Christian Baumgartner (Tuebingen University) Organised by: Tuebingen University Zoom link is here. Real-time Distributed Decision Making in Networked Systems Speaker: Na Li (Harvard) Organised by: Control Meets Learning Join the Google group to find out how to register. The limits of Shapley values as a method for explaining the predictions of an ML system Speaker: Suresh Venkatasubramanian (University of Utah) Organised by: Trustworthy ML Join the mailing list for instructions on how to sign up, or check the website a few days beforehand for the Zoom link.

If you're wondering when Apple will hold its next event, Siri may have the answer. Ask the digital helper: "When is the next Apple event?" and it will respond with "the special event is on Tuesday, April 20, at Apple Park in Cupertino, CA. You can get all the details on Apple.com." MacRumors, which spotted the reply, says the virtual assistant is providing it in certain instances on iPhone, iPad, Mac, and HomePod. While it's an open secret that Apple is planning an event for later this month where it's expected to debut a new iPad Pro, Siri has seemingly leaked the date ahead of confirmation.

Siri may have just leaked the date of Apple's next event

It appears that Apple is planning an event on April 20. This is according to Apple's smart assistant Siri itself. When asked "When is the next Apple event?," Siri answers: "The special event is on Tuesday, April 20, at Apple Park in Cupertino, CA. You can get all the details on Apple.com." MacRumors first reported on the news, and I was able to verify that it works on my MacBook, though it didn't work on my iPhone, nor on a colleague's iPad, iPhone, or MacBook.

The state of autonomous vehicle safety standard regulation in the US today is between two presidential administrations, with the Trump Administration-era regulations issued Jan. 14 likely to be soon superseded by policies of the Biden Administration. The Trump Administration rules would allow self-driving vehicle manufacturers to skip certain federal crash safety requirements in vehicles not designed to carry people, marking the first major update to federal safety standards to accommodate innovations of driverless technology, according to an account in The Detroit News.This would apply for example to the delivery vehicle from startup Nuro, which has no driver or passengers. The National Highway Traffic Safety Administration estimated the rule would save automakers and consumers $5.8 billion in 2050. "With more than 90% of serious crashes caused by driver error, it's vital that we remove unnecessary barriers to technology that could help save lives," stated then NHTSA Deputy Administrator James Owens. On Jan. 25, Steve Cliff, deputy executive officer of the California Air Resources Board, was named deputy administrator of the NHTSA. Ariel Wolf, counsel to the Self-Driving Coalition, said of the Jan. 14 announcement that the NHTSA rule was a "highly significant" development in safety rules for self-driving vehicles.

A pioneer in machine learning has argued that the technology is best placed to augment human intelligence and bemoaned'confusion' over the meaning of artificial intelligence (AI). Michael I. Jordan, a professor in the department of electrical engineering and computer science, and department of statistics, at the University of California, Berkeley, told the IEEE that while science-fiction discussions around AI were'fun', they were also a'distraction.' "There's not been enough focus on the real problem, which is building planetary-scale machine learning-based systems that actually work, deliver value to humans, and do not amplify inequities," said Jordan, in an article from IEEE Spectrum author Kathy Pretz. Jordan, whose awards include the IEEE John von Neumann Medal, awarded last year for his contributions to machine learning and data science, wrote an article entitled'Artificial Intelligence: The Revolution Hasn't Happened Yet', first published in July 2019 but last updated at the start of this year. With various contributors thanked at the foot of the article – including one Jeff Bezos – Jordan outlined the rationale for caution.

Am I arguing with a machine? AI debaters highlight need for transparency

Can a machine powered by artificial intelligence (AI) successfully persuade an audience in debate with a human? Researchers at IBM Research in Haifa, Israel, think so. They describe the results of an experiment in which a machine engaged in live debate with a person. Audiences rated the quality of the speeches they heard, and ranked the automated debater's performance as being very close to that of humans. Such an achievement is a striking demonstration of how far AI has come in mimicking human-level language use (N.

Does Your AI Model Know What It's Talking About? Here's One Way To Find Out. 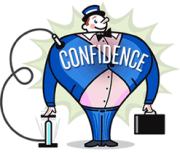 In Season 4 of the show Silicon Valley, Jian-Yang creates an app called SeeFood that uses an AI algorithm to identify any food it sees--but since the algorithm has only been trained on images of hot dogs, every food winds up being labeled "hot dog" or "not hot dog." While Jian-Yang's creation may seem absurd, in fact his app displays an intelligence that most AI models in use today do not: it only gives an answer that it knows is 100% accurate. In real life, when you ask most machine learning algorithms a question, they are programmed to give you an answer, even when they are somewhat or entirely unqualified to do so. The data on which these models are trained may have nothing to do with the specific question being asked, but the model delivers an answer anyway -- and as a result, that answer is often wrong. It's as if SeeFood tried to identify every food based only on a knowledge of hot dogs. This issue, known as "model overconfidence," is a key reason why many AI deployments fail to meet their business objectives.

Serve Food in Far-Away Restaurants--Right From Your Couch

David Tejeda helps deliver food and drinks to tables at a small restaurant in Dallas. Sometimes he lends a hand at a restaurant in Los Angeles too. Tejeda does all this from his home in Belmont, California, by tracking the movements and vital signs of robots that roam around each establishment, bringing dishes from kitchen to table, and carrying back dirty dishes. Sometimes he needs to help a lost robot reorient itself. "Sometimes it's human error, someone moving the robot or something," Tejeda says.