... includes all of the major AI methods for (a) representing knowledge about a task or a problem area, and (b) reasoning about a problem.

Data Science Techniques: How extreme is your data point?

In this article, I will discuss Outliers and Model Selection. When I was an undergraduate student of Science at the University of Waterloo, my lab professor always said to keep all data, even if it is an outlier. This is because we want to keep the authenticity of the data and to be able to make scientific discoveries. Many discoveries have been found on accidents, so let's explore whether you should delete that data point because you drop your hamburger on your experiment or not. Running regression is one thing, but choosing the suitable model and the correct data is another.

The Python Programming For Everyone Immersive Training

Welcome to The Python Programming For Everyone Immersive Training. This Ultimate Masterclass covers all the essential topics to become a Professional Python developer like: variables, data types, Strings, data structures, functional programming, different types of modules, files handling, object-oriented programming and more. You'll get A demonstration of each point in this training and an explanation of all theoretical and practical aspects in an easy way and in an easy language for anyone. Also, you can test your skills using quizzes and be a certified python developer that can be hired and you can upload the certificate of completion to your profile. Python is one of the coolest,and best programming languages in terms of ease and features.

KISS the 288 View of Your Customer

Much has been written about the power of our massive data collections to enable the 360 view of our customers, our business, our employees, and our processes. When our numerous disparate heterogeneous data collections are aggregated and joined in our data lake or data cloud or data fabric or wherever, with appropriate data tagging, data discovery and data integration tools in place, then we can reach for that ideal: the 360 view of our domain! But is the "360 view" really the right goal? It is definitely a good target and we should incentivize productive work toward that ambition, but should we go all the way to achieving that full 360 view in all projects, at all times? Most of us have probably learned by now the truth in the statement "the perfect is the enemy of good enough."

Why 'Explicit Uncertainty' Matters for the Future of Ethical Technology

The biggest concerns over AI today are not about dystopian visions of robot overlords controlling humanity. Social media algorithms are one of the most prominent examples. Take YouTube, which over the years has implemented features and recommendation engines geared toward keeping people glued to their screens. As The New York Times reported in 2019, many content creators on the far right learned that they could tweak their content offerings to make them more appealing to the algorithm and drive many users to watch progressively more extreme content. YouTube has taken action in response, including efforts to remove hate speech. An independently published study in 2019 claimed that YouTube's algorithm was doing a good job of discouraging viewers from watching "radicalizing or extremist content."

The Quadrilateral Security Dialogue, better known as the Quad, has announced various non-military technology initiatives aimed at establishing global cooperation on critical and emerging technologies, such as AI, 5G, and semiconductors. The various technology initiatives were announced after the leaders of Quad countries -- comprised of Australia, India, Japan, and the US -- met on Friday, which marked the first time the group has come together in person. Among the initiatives announced by the security bloc was the intention to develop new global cybersecurity standards across various technology sectors. "With respect to the development of technical standards, we will establish sector-specific contact groups to promote an open, inclusive, private-sector-led, multi-stakeholder, and consensus-based approach," the Quad said in a joint statement. As part of work to be undertaken towards establishing these global technology standards, the Quad said it would publish a Quad Statement of Principles, which will be a guide for implementing responsible, open, high-standards innovation. 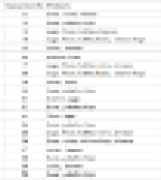 In this article, you will discover the FP Growth algorithm. It is one of the state-of-the-art algorithms for frequent itemset mining (also called Association Rule Mining) and basket analysis. Let's start with an introduction to Frequent Itemset Mining and Basket Analysis. Basket Analysis is the study of baskets in shopping. This can be online or offline shopping, as long as you can obtain data that tracks the products for each transaction.

Robots are sweeping the world, from amazon's Alexa to full functioning human-like androids. The internet seems all buzzed at a promise of a future where humans and robots will happily work together. However, there is a dark side to robots that many people are still unaware of. BINA48 employs a mix of off-the-shelf software and customized artificial intelligence algorithms, using a microphone to hear, voice recognition software, dictation software which allows improvement in the ability to listen and retain information during a conversation. This human look-like robot is one of the most advanced robots on this planet.

In multi-agent reinforcement learning (MARL), the environments are highly stochastic due to the partial observability of each agent and the continuously changing policies of the other agents. One of popular research directions is to enhance the training procedure of fully cooperative and decentralized agents. In the past few years, a number of MARL researchers turned their attention to centralized training with decentralized execution (CTDE). Among these CTDE approaches, value function factorization methods are especially promising in terms of their superior performances and data efficiency. Value function factorization methods introduce the assumption of individual-global-max (IGM) [1], which assumes that each agent's optimal actions result in the optimal joint actions of the entire group. Based on IGM, the total return of a group of agents can be factorized into separate utility functions for each agent.