We present a Reinforcement Learning (RL) model for self-improving chatbots, specifically targeting FAQ-type chatbots. The model is not aimed at building a dialog system from scratch, but to leverage data from user conversations to improve chatbot performance. At the core of our approach is a score model, which is trained to score chatbot utterance-response tuples based on user feedback. The scores predicted by this model are used as rewards for the RL agent. Policy learning takes place offline, thanks to an user simulator which is fed with utterances from the FAQ-database.

9 Promising Applications of Reinforcement Learning in 2021

Reinforcement Learning(RL) provides solutions to a sequential decision making problem or a problem that can be re-structured as sequential in nature. Such puzzles do not depend on a single decision made at a certain point in time but on an entire sequence of trailing choices -- an example of this is treatment procedures in healthcare. It is desirable to run RL systems in the real world and have real benefits. This is something that has seen growing application success, but with its own set of challenges. This post explores exciting applications of RL in the real world that promise to give beneficial use cases, as discussed in this year's RL for real-life workshop.

Online Courses Udemy - Complete guide to Reinforcement Learning, with Stock Trading and Online Advertising Applications BESTSELLER Created by Lazy Programmer Team, Lazy Programmer Inc English [Auto-generated], French [Auto-generated], 4 more Students also bought Data Science: Natural Language Processing (NLP) in Python Natural Language Processing with Deep Learning in Python Deep Learning Prerequisites: Linear Regression in Python Cluster Analysis and Unsupervised Machine Learning in Python Complete Python Bootcamp: Go from zero to hero in Python3 Preview this course GET COUPON CODE Description When people talk about artificial intelligence, they usually don't mean supervised and unsupervised machine learning. These tasks are pretty trivial compared to what we think of AIs doing - playing chess and Go, driving cars, and beating video games at a superhuman level. Reinforcement learning has recently become popular for doing all of that and more. Much like deep learning, a lot of the theory was discovered in the 70s and 80s but it hasn't been until recently that we've been able to observe first hand the amazing results that are possible. In 2016 we saw Google's AlphaGo beat the world Champion in Go.

Starting in this chapter, the assumption is that the environment is a finite Markov Decision Process (finite MDP). In this chapter we'll see how we can use DP algorithms to compute the value functions in a slightly different, less intractable way. The general idea is to take these 2 equations, and turn them into update rules for for improving the approximations of our value functions. It will make more sense later on. Policy Evaluation Policy evaluation means computing the state-value function Vπ for an arbitrary policy π.

Reinforcement learning provides a general framework for flexible decision making and control, but requires extensive data collection for each new task that an agent needs to learn. In other machine learning fields, such as natural language processing or computer vision, pre-training on large, previously collected datasets to bootstrap learning for new tasks has emerged as a powerful paradigm to reduce data requirements when learning a new task. In this paper, we ask the following question: how can we enable similarly useful pre-training for RL agents? We propose a method for pre-training behavioral priors that can capture complex input-output relationships observed in successful trials from a wide range of previously seen tasks, and we show how this learned prior can be used for rapidly learning new tasks without impeding the RL agent's ability to try out novel behaviors. We demonstrate the effectiveness of our approach in challenging robotic manipulation domains involving image observations and sparse reward functions, where our method outperforms prior works by a substantial margin.

As robots replace humans in dangerous situations such as search and rescue missions, they need to be able to quickly assess and make decisions--to react and adapt like a human being would. Researchers at the University of Illinois at Urbana-Champaign used a model based on the game Capture the Flag to develop a new take on deep reinforcement learning that helps robots evaluate their next move. The team of researchers chose Capture the Flag because it's played with two teams, each with multiple teammates, where the opposing team is also making decisions. "Robots can learn how to react in an environment like a competitive game by using a kind of trial and error process, called reinforcement learning. They learn what actions to take in a given situation by playing the game," said Huy Tran, a researcher in the Department of Aerospace Engineering at UIUC. "The challenge is to figure out how to create agents that can also adapt to unexpected situations." 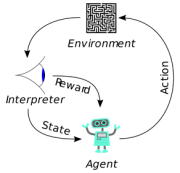 In this blog post I want to introduce some basic concepts of reinforcement learning, some important terminology, and show a simple use case where I create a game playing AI in KNIME Analytics Platform. After reading this, I hope you'll have a better understanding of the usefulness of reinforcement learning, as well as some key vocabulary to facilitate learning more. You may have heard of Reinforcement Learning (RL) being used to train robots to walk or gently pick up objects; or perhaps you may have heard of it's uses in the discovery of new chemical compounds for medical use. It's even being applied to regular vehicle and network traffics! Reinforcement learning is an area of Machine Learning and has become a broad field of study with many different algorithmic frameworks.

While the scope of reinforcement learning (RL) is likely to soon extend far beyond computer simulation, today the main location for training RL agents is within the digital environment. In the world of artificial intelligence, simulators are often the environments in which an algorithm functions. For humans, we are born directly into our simulator and it requires no effort on our part to go on functioning. We call this simulator the universe and it exists whether we believe in it or not. Similarly, the laws of physics apply whether you acknowledge them or not. They require no effort or acquiescence on our part.

DeepMind this week open-sourced Lab2D, a software system designed to support the creation of 2D environments for AI and machine learning research. The Alphabet subsidiary says that Lab2D was built with the needs of deep reinforcement learning researchers in mind, but that it can be useful beyond that particular subfield of machine learning. The DeepMind team behind Lab2D makes the case that 2D environments are inherently easier to understand than 3D ones at little loss of expressiveness. Even a game as simple as Pong, which essentially consists of three moving rectangles on a black background, can capture something fundamental about the real game of table tennis, the researchers assert. This abstraction ostensibly makes it easier to capture the essence of problems and concepts in AI. "Rich complexity along numerous dimensions can be studied in 2D just as readily as in 3D, if not more so … In addition, 2D worlds are significantly less resource-intensive to run, and typically do not require any specialized hardware (like GPUs) to attain reasonable performance," the researchers continued in their paper describing Lab2D. "2D worlds have been successfully used to study problems as diverse as social complexity, navigation, imperfect information, abstract reasoning, exploration, and many more."

Combining reinforcement learning (RL) and molecular dynamics (MD) simulations, we propose a machine-learning approach (RL) to automatically unravel chemical reaction mechanisms. In RL, locating the transition state of a chemical reaction is formulated as a game, where a virtual player is trained to shoot simulation trajectories connecting the reactant and product. The player utilizes two functions, one for value estimation and the other for policy making, to iteratively improve the chance of winning this game. We can directly interpret the reaction mechanism according to the value function. Meanwhile, the policy function enables efficient sampling of the transition paths, which can be further used to analyze the reaction dynamics and kinetics.