'It's the opposite of art': why illustrators are furious about AI 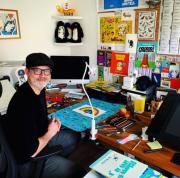 'Woman reading book, under a night sky, dreamy atmosphere," I type into Deep Dream Generator's Text 2 Dream feature. In less than a minute, an image is returned to me showing what I've described. Welcome to the world of AI image generation, where you can create what on the surface looks like top-notch artwork using just a few text prompts, even if in reality your skills don't go beyond drawing stick figures. AI image generation seems to be everywhere: on TikTok, the popular AI Manga filter shows you what you look like in the Japanese comic style, while people in their droves are using it to create images for everything from company logos to picture books. It's already been used by one major publisher: sci-fi imprint Tor discovered that a cover it had created had used a licensed image created by AI, but decided to go ahead anyway "due to production constraints". The biggest players in AI include companies such as MidJourney, Stable Diffusion and Deep Dream Generator (DDG). They're free to use, up to a point, making them attractive to those just wanting to try them out. There's no denying that they're fun, but closer examination of the images they produce shows oddities. The face of the woman in my image has very odd features, and appears to be holding multiple books. The images also have a similarly polished, somewhat kitsch aesthetic. And, while there's an initial thrill at seeing an image appear, there's no creative satisfaction. The implications of AI image generation are far-reaching and could impact everything from film to graphic novels and more. Children's illustrators were quick to raise concerns about the technology on social media. Among them is author and illustrator Rob Biddulph, who says that AI-generated art "is the exact opposite of what I believe art to be.

The Future of Writing in the Age of Artificial Intelligence

Artificial Intelligence has been promising for a long time to disrupt almost any industry that is knowledge based and relies on data and information. One platform is now starting to deliver. Open AI was founded in 2015 by Elon Musk and is expected to be valued at $29 Billion at its next round of funding. Open AI's latest technology tool, ChatGPT was released on November 29, 2022. In just one week one million users registered with the platform.

Apple Just Rolled Out A.I. Audiobooks. What Scares Human Narrators Is That Some of Them Are Pretty Good.

When Apple quietly launched a catalog of A.I.-narrated audiobooks early in January, it was surprising news, and it wasn't. Robot narrators are not new: Alexa provides text-to-speech for Kindle content and Google offers a suite of artificial voices of various genders and accents for those wishing to publish "auto-narrated" audiobooks. The difference is that Apple's four voices--"Madison" and "Jackson" suggested for fiction, "Helena" and "Mitchell" for nonfiction--sound much more natural than the digitally-generated voices available elsewhere, leading to fears that they could replace human narrators altogether. A few of Apple's voices are even noticeably similar to the voices of well-known members of the community of human audiobook narrators. "There's a little tension there," Edoardo Ballerini told me.

OpenAI is building software capable of detecting whether text was generated by its ChatGPT model after New York City education officials announced it was blocking students from accessing the tool in public schools.

You Can Listen to Audiobooks Narrated by Artificial Intelligence Apple is rolling out audiobooks narrated by artificial intelligence, reports the Guardian's Leyland Cecco. The company recently unveiled a series of fiction and romance audiobooks featuring "digital narration" on its Apple Books platform, which allows readers to browse and buy e-books and audiobooks. The two current A.I. narrators are called Madison, a soprano, and Jackson, a baritone, per Apple's website. In the future, the company plans to also offer A.I.-narrated nonfiction and self-development audiobooks and will be rolling out two additional digital voices named Helena and Mitchell. According to the Guardian, Apple approached independent publishers in recent months and asked them to participate in its digital narration initiative.

But in the future, will humans still be the most popular storytellers or will robots end up dominating the booming industry? Well Apple clearly thinks there's a market for the latter as it has quietly launched a catalogue of books that are narrated by artificial intelligence. This new feature is just the start of what will be a fierce battle with the likes of Amazon and Spotify for an industry that insiders think could be worth more than $35 billion (£29 billion) by 2030. You can find the robot-voiced audiobooks, which use text-to-speech translation, by searching for'AI narration' on Apple's Books app. There are two types of AI voice available to choose from, both of which have an American accent and speak only in English.

When you browse Apple Books for your next audiobook, you might come across a few titles with a note that says they were "Narrated by Apple Books." That's because the tech giant has released a catalogue of titles that make use of its new AI-powered digital narration service. The company said the service uses the advanced speech synthesis technology it developed "to produce high-quality audiobooks from an ebook file." According to The Guardian, Apple approached independent publishers who may be interested in teaming up for the project's launch in recent months. Authors were reportedly told that the company behind the technology would shoulder the costs of turning their books into audiobooks and that they would be earning royalties.

Why AI audiobook narrators could win over some authors and readers, despite the vocal bumps

For the first few seconds, the narrator of Kristen Ethridge's new romance audiobook, Shelter from the Storm, sounds like a human being. The voice is light and carefully enunciated, with the slow pacing of any audiobook narrator, as it begins: "There's a storm coming, and her name is Hope." "I know that sounds a little crazy," the breathy voice continues, grinding out the words. "That something so destructive could be labeled with such a peaceful name." It's the aural equivalent of watching the gears of a machine rotate under a surface of what looks like human skin.

Death of the narrator? Apple unveils suite of AI-voiced audiobooks

Apple has quietly launched a catalogue of books narrated by artificial intelligence in a move that may mark the beginning of the end for human narrators. The strategy marks an attempt to upend the lucrative and fast-growing audiobook market – but it also promises to intensify scrutiny over allegations of Apple's anti-competitive behaviour. The popularity of the audiobook market has exploded in recent years, with technology companies scrambling to gain a foothold. Sales last year jumped 25%, bringing in more than $1.5bn. Industry insiders believe the global market could be worth more than $35bn by 2030.