Trolley Problem, Inc review – a thrill ride into the world of ethical dilemmas

Should a hospital introduce a mandatory vaccination programme to stop a breakout of infant disease when one of five children will become ill from the vaccine? Should an AI company programme a self-driving car to save its passengers at any cost? Should a government torture a prisoner to extract information that is certain to save many lives? In Trolley Problem, Inc – a game named after the well-known philosophical dilemma by which an onlooker can choose to divert a runaway trolley to kill one person instead of five – you have 40 seconds to answer these and scores of other ethical quandaries. As the timer drains, a well-spoken, gently sarcastic female commentator articulates the counterargument to your intended choice.

Increasing access and equity in healthcare through AI - MedCity News

One of the racial disparities long seen in healthcare lies in minority races returning less frequently for follow-up appointments. AI and remote patient monitoring can be powerful tools to give providers insight into the day-to-day factors impacting a patient's health. Advanced algorithms can process large data sets including clinical and socioeconomic information to give a holistic view of the individual, and AI has the ability to suggest what approaches will work most successfully to not only get patients activated, but keep them engaged. With the ability to collect data from patient devices and more, AI and patient monitoring provide additional data sources to refine the patient experience, including prime times for engagement – such as attending critical follow-up appointments.

Is AI Nothing More Than A Profit-Generating Tool For Mega Corporations? 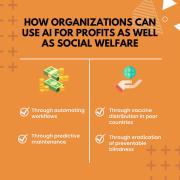 It is natural for organizations to flatter their market rivals by copying their successful business strategies. In fact, corporate history is littered with examples of winning ideas being conveniently replicated. Take the now-overcrowded smart home assistant market, for example. Not many years after Amazon debuted the Echo in 2015, rival products such as Google Home and Apple HomePod arrived to compete for market supremacy. In a similar vein, organizations have seemingly understood the power of AI in the last few years.

Australian drone-based logistics firm Swoop Aero has succeeded in transporting crucial Pfizer vaccines in Malawi. The air supply of the vaccines, which require ultra-cold chain situations, marks a milestone for Malawi, in addition to for Swoop Aero and medical air deliveries usually, showcasing the potential the know-how has to help public well being. Over 17,280 COVID-19 vaccine doses have been efficiently delivered throughout the Southern districts of Malawi thus far, with producers corresponding to AstraZeneca and Johnson and Johnson making use of the prevailing Swoop Aero drone community to shortly distribute crucial vaccines to distant communities. Swoop Aero intends to ship hundreds extra vaccines as they develop into out there. "The supply of Pfizer COVID-19 vaccines underscores the novel worth of bi-directional drone networks in Malawi," mentioned Swoop Aero CEO Eric Peck. 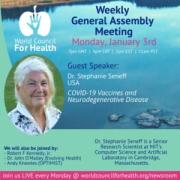 Dr. Seneff is a Senior Research Scientist at MIT's Computer Science and Artificial Intelligence Laboratory in Cambridge, Massachusetts, USA. She has a BS from MIT in biology and MS, EE, and PhD degrees from MIT in electrical engineering and computer science. Her recent interests have focused on the role of toxic chemicals and micronutrient deficiencies in health and disease, with a special emphasis on the pervasive herbicide, glyphosate, and the mineral, sulfur. This is an edited segment from the weekly live General Assembly meeting on January 3, 2022. The full meeting can be viewed here. This clip is also available on Rumble and Odysee. "Thank you so much Dr. Seneff!!! Genius presentation, so many important information brought to us easy to understand." -Dr. "Thank you for your important work. The mitigating treatments are hopeful for those who have been coerced into accepting these injections." "Dr Seneff, I hope you will come back and tell us more about your work and the mechanism for the other types of harms that your work has predicted." "Thank you so much, Dr. Seneff." -Helena K "Thank you Dr Seneff, amazing presentation." "Thank you Dr Seneff, that was amazing!" -Dr Tess Lawrie "Beautiful and substantial presentation – thank you, Dr. Seneff!" – Susan I just want to read this quote at the end of this book "The Real Anthony Fauci" and it's because it's Martin Luther King Jr.

Background: Recently, a high number of daily positive COVID-19 cases have been reported in regions with relatively high vaccination rates; hence, booster vaccination has become necessary. In addition, infections caused by the different variants and correlated factors have not been discussed in depth. With large variabilities and different co-factors, it is difficult to use conventional mathematical models to forecast the incidence of COVID-19. Methods: Machine learning based on long short-term memory was applied to forecasting the time series of new daily positive cases (DPC), serious cases, hospitalized cases, and deaths. Data acquired from regions with high rates of vaccination, such as Israel, were blended with the current data of other regions in Japan to factor in the potential effects of vaccination. The protection provided by symptomatic infection was also considered in terms of the population effectiveness of vaccination as well as the waning protection and ratio and infectivity of viral variants. To represent changes in public behavior, public mobility and interactions through social media were also included in the analysis. Findings: Comparing the observed and estimated new DPC in Tel Aviv, Israel, the parameters characterizing vaccination effectiveness and the waning protection from infection were well estimated; the vaccination effectiveness of the second dose after 5 months and the third dose after two weeks from infection by the delta variant were 0.24 and 0.95, respectively. Using the extracted parameters regarding vaccination effectiveness, new cases in three prefectures of Japan were replicated.

In August 2021, the news about Japan suspending 1.63 million doses of the Moderna vaccine shocked the world community. It was revealed that the vaccine was contaminated with metal particles due to "human error specific to visually misjudging the required 1mm gap between the star-wheel and the stopper" of the machine that put the tops on vials. This incident put the spotlight on vaccine inspection, and how it could be carried out at scale. Clearly, new systems were needed. This mistake could have posed a threat to the lives of 1.63 million people getting their vaccination.

In this article, we aim to provide a general and complete understanding of semi-supervised (SS) causal inference for treatment effects. Specifically, we consider two such estimands: (a) the average treatment effect and (b) the quantile treatment effect, as prototype cases, in an SS setting, characterized by two available data sets: (i) a labeled data set of size $n$, providing observations for a response and a set of high dimensional covariates, as well as a binary treatment indicator; and (ii) an unlabeled data set of size $N$, much larger than $n$, but without the response observed. Using these two data sets, we develop a family of SS estimators which are ensured to be: (1) more robust and (2) more efficient than their supervised counterparts based on the labeled data set only. Beyond the 'standard' double robustness results (in terms of consistency) that can be achieved by supervised methods as well, we further establish root-n consistency and asymptotic normality of our SS estimators whenever the propensity score in the model is correctly specified, without requiring specific forms of the nuisance functions involved. Such an improvement of robustness arises from the use of the massive unlabeled data, so it is generally not attainable in a purely supervised setting. In addition, our estimators are shown to be semi-parametrically efficient as long as all the nuisance functions are correctly specified. Moreover, as an illustration of the nuisance estimators, we consider inverse-probability-weighting type kernel smoothing estimators involving unknown covariate transformation mechanisms, and establish in high dimensional scenarios novel results on their uniform convergence rates, which should be of independent interest. Numerical results on both simulated and real data validate the advantage of our methods over their supervised counterparts with respect to both robustness and efficiency.