How Chinese Strategists Think AI Will Power a Military Leap Ahead 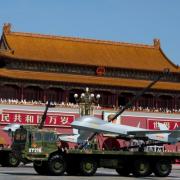 The People's Liberation Army has yet to adopt a definition, let alone a formal plan, for "intelligentization (智能化)," a Chinese vision for the transformation of warfare through artificial intelligence and automation. But Chinese military theorists see it as a rare opportunity for "leapfrog development" over adversaries. One author suggests that Star Wars will "become a reality"; another says the fantasies from "mythological fiction" will come true. Their writings, while not authoritative, have coalesced around several key themes that offer a crucial glimpse into potential PLA thinking and ambitions. Whereas these earlier eras of warfare turned on "mechanization" in the "physical space" and "informationization" in the "information space," PLA theorists argue that intelligentization will center upon a "cognitive space" that privileges complex thinking and effective decision-making.

After insisting it had been a "righteous strike," the Pentagon finally faced up to the facts and acknowledged that the last U.S. drone strike in Afghanistan before the withdrawal of American troops was a "horrible mistake" that killed 10 civilians, including as many as seven children. The admission came after news organizations, including the New York Times and Washington Post, had published reports casting doubt on the official version of events that claimed the Aug. 29 drone strike had stopped an imminent attack on the Kabul airport. Military officials now admit that pretty much everything they believed when they carried out the strike was wrong. The driver that the drone targeted and officials believed was a terrorist was actually Zamarai Ahmadi, a longtime aid worker for a U.S.-based group. Officials believed he had loaded explosives in the trunk of a white Toyota, but in fact he was likely carrying water bottles.

A dress worn this week by Democratic Congresswoman Alexandria Ocasio-Cortez (D-NY), which bore the message "tax the rich," set off a wave of debate over how best to address wealth inequality, as Congress weighs a $3.5 trillion spending bill that includes tax hikes on corporations and high-earning individuals. The debate coincides with the ongoing pandemic in which billionaires, many of whom are tech company founders, have added $1.8 trillion in wealth while consumers have come to depend increasingly on services like e-commerce and teleconference, according to a report released last month by the Institute for Policy Studies. In a new interview, artificial intelligence expert Kai Fu-Lee -- who worked as an executive at Google (GOOG, GOOGL), Apple (AAPL), and Microsoft (MSFT) -- attributed the rise of wealth inequality in part to the tech boom in recent decades, predicting that the trend will worsen in coming years with the continued emergence of AI. "We can just already see all the internet companies," says Lee, the co-author of a new book entitled "AI 2041: Ten Visions for Our Future." "Without AI, they probably would be only worth half of what they're worth, because AI helped them monetize." "When it's simultaneously making a small number of people ultra-rich and making many people jobless," he says.

BigBear.ai is the new leader in decision dominance serving the national defense and intelligence communities. The Company delivers high-end capabilities across the data and digital spectrum to deliver information superiority and decision support. Headquartered in Columbia, Maryland, BigBear.ai has additional locations in Virginia, Massachusetts, and California.

Fox News host slams Milley for allegedly wanting to share information with the Taliban and weighs in on the U.S. mistakenly striking civilians on'Tucker Carlson Tonight' As American forces were pulling out of Afghanistan this summer, Mark Milley, the chairman of the Joint Chiefs of Staff, announced a new and highly innovative intelligence partnership. The Pentagon, Milley said, would begin sharing classified information with the Taliban -- the bearded religious extremists in man pajamas that for 20 years we've been told pose a major threat to the United States. The Biden administration, Milley explained, was open to coordinating with the Taliban on counterterrorism strikes against our new enemies -- a shadowy group that may or may not actually exist, called "ISIS-K": Mark Milley, September 1: We don't know what the future of the Taliban is, but I can tell you from personal experience that this is a ruthless group from the past and whether or not they change remains to be seen. And as far as our dealings with them at that airfield or in the past year or so in war, you do what you must in order to reduce risk emission and force, not what you necessarily want to do. Reporter: Any possibility of coordination against ISIS-K with them (the Taliban) do you think? Because when you are fighting ISIS-K, no holds are barred.

Washington – A drone strike in Kabul last month killed as many as 10 civilians, including seven children, the U.S. military said on Friday, apologizing for what it called a "tragic mistake." The Pentagon had said the Aug. 29 strike targeted an Islamic State suicide bomber who posed an imminent threat to U.S.-led troops at the airport as they completed the last stages of their withdrawal from Afghanistan. Even as reports of civilian casualties emerged, the top U.S. general had described the attack as "righteous." The head of U.S. Central Command, Marine Corps Gen. Frank McKenzie, said that at the time he had been confident it averted an imminent threat to the forces at the airport. "Our investigation now concludes that the strike was a tragic mistake," McKenzie told reporters.

Head of the United States Central Command Gen. Kenneth McKenzie announced Friday that it is unlikely any ISIS-K members were killed in a Kabul drone strike on August 29, which led to the deaths of multiple civilian casualties. "We now assess that it is unlikely that the vehicle and those who died were associated with ISIS-K or a direct threat to US forces," McKenzie said of the airstrike at a briefing. The drone strike, which was intended to target ISIS-K operatives, resulted in the deaths of an aid worker and up to nine of his family members, including seven children.

U.S. household debt is almost $15 trillion and two-thirds of that is mortgage debt. Pandemic-related unemployment, high inflation and natural disasters increase lenders' credit risk as the deadline to end mortgage forbearance nears. With two million household mortgages in forbearance resulting from pandemic relief, plus a rising number of originations, it is increasingly important to deploy technology that monitors credit risk and predicts delinquency in advance. The Federal Reserve Bank of New York's (NY Fed) Center for Microeconomic Data released its Q2 2021 Quarterly Report on Household Debt and Credit on August 4th, 2021. Delinquency numbers are the lowest they've been since 2006, but household debt has risen to an all-time high.

Europe wants to be a computer chip powerhouse again. It's not going to be easy

The European Commission will soon present its European Chips Act, a plan to reduce supply chain dependencies on chip manufacturers outside the bloc. The plan was detailed by EC president Ursula von der Leyen at the 2021 State of the Union address. It's become standard for mid-range and flagship phones across all major US wireless carriers and most new phones incorporate 5G technology. "The aim is to jointly create a state-of-the-art European chip ecosystem, including production," she said. "That ensures our security of supply and will develop new markets for ground-breaking European tech."