The Ukrainian army's astute use of drones has been a cornerstone of its defence against the powerful Russian invader, but experts say their role is beginning to fade as heavy artillery takes over. In the early phase of the war, Ukraine's sky seemed filled with the remote-controlled aircraft deployed by President Volodymyr Zelensky's army to spy on the enemy, or go on the attack. During Moscow's early advance on Kyiv "it would have been extremely challenging for Ukraine to block (Russian President Vladimir) Putin's army without drones", said Paul Lushenko, a US Army Lieutenant Colonel and PhD student at Cornell University. "They could compound or exacerbate Putin's strategic and logistical challenges," he told AFP. The Turkish-made Bayraktar drone, known as TB-2, already famous worldwide, added to its stellar reputation during the defence of Ukraine's capital. On top of providing intelligence on Russian movements, drones also helped Ukraine offset much of its air force's weakness compared to that of Russia.

When Russian president Vladimir Putin launched his full invasion of Ukraine in February, the world expected Moscow's cyber and information operations to pummel the country alongside air strikes and shelling. Two months on, however, Kyiv has not only managed to keep the country online amidst a deluge of hacking attempts, but it has brought the fight back to Russia. Even Ukrainian officials are surprised by how ineffective Russia's digital war has been. "I think that the root cause of this is the difference between our systems," says Mykhailo Fedorov, Ukraine's 31-year-old minister for digital transformation. "Because the Russian system is centralized. And it leads to the scale of corruption and graft that is becoming increasingly apparent as the war continues."

Russian President Vladimir Putin instated a new commander to lead operations in Ukraine as officials warn Moscow is looking to shift its focus in eastern Ukraine after more than six weeks of war. Gen. Alexander Dvornikov, commander of Russia's southern military district (SMD), will now lead the invasion, first reported the BBC late Friday. Image released by the Ukrainian Ministry of Defense on Thursday Feb 17, 2022 shows the frontline of Donbas, a conflict area with the Russian-backed separatists, during President Volodymyr Zelenskiy's visit to the Donetsk region in the east of Ukraine. Dvornikov not only has known experience in Russia's campaign in Syria, but also led military exercises in southern Russia last year, right along Ukraine's border with the Donbas region. A western official told the outlet that the change in command will improve Russia's flagging invasion after it failed to take the capital city of Kyiv despite weeks of shelling and attempts to push ground forces across the country.

Ukraine's Armed Drones Could Offset Some of Russia's Military Advantage

KYIV, Ukraine--Last October, as artillery shells fired by Moscow-backed separatists pounded a Ukrainian mechanized brigade, Kyiv responded with a powerful new weapon. A Turkish-made drone launched a missile and knocked out a Russian-supplied howitzer. This demonstration of force--the first drone strike in combat by Ukraine's military--unnerved Russia and fueled complaints from Moscow that North Atlantic Treaty Organization countries including Turkey, the U.S. and Britain were threatening Russia's security by supplying sophisticated new weapons to Kyiv.

From comic to commander-in-chief: A steep learning curve for Ukraine's new leader 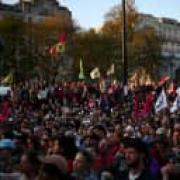 KIEV - Ukraine's election has catapulted Volodymyr Zelenskiy, a 41-year-old stand-up comedian and television star with no political experience, into the nation's top job. As leader of a country dependent on international aid and battling separatists, Zelenskiy will have to deal with Russian President Vladimir Putin, deep economic problems and possibly rebellious elites. Here is a look at the main challenges facing Ukraine's sixth president: Voters expect the new commander-in-chief to end a five-year war with Moscow-backed separatists in the industrial east. The conflict has claimed some 13,000 lives since 2014 and is a huge burden on the economy and society. Despite numerous attempts to staunch the bloodletting, the conflict regularly claims the lives of soldiers and civilians, and a solution is nowhere in sight.