Turbine maintenance is an expensive, high-risk task. According to a recent analysis from the news website, wind farm owners are expected to spend more than $40 billion on operations and maintenance over a decade. Another recent study finds by using drone-based inspection instead of traditional rope-based inspection, you can reduce the operational costs by 70% and further decrease revenue lost due to downtime by up to 90%. This blog post will present how drones, machine learning (ML), and Internet of Things (IoT) can be utilized on the edge and the cloud to make turbine maintenance safer and more cost effective. First, we trained the machine learning model on the cloud to detect hazards on the turbine blades, including corrosion, wear, and icing.

DEME Offshore and Sabca have carried out a series of tests at the Rentel offshore wind farm with an aim to automate critical and ad hoc operations in the near future by using autonomous aerial vehicles (AAVs) and artificial intelligence (AI). The companies, which teamed up two years ago, have performed the first commercial, cross-border, "beyond visual line of sight" (BVLOS) drone operations at the wind farm 35 kilometres off the Belgian coast, where tests in Search & Rescue operations, environmental surveys, turbine and substation inspections, as well as parcel deliveries took place. During the tests, both a multicopter drone and a fixed-wing surveillance drone with a wing span of more than 3 metres were deployed in parallel. The long endurance surveillance drone took off from the Belgian coast and flew to the Rentel offshore wind farm. Meanwhile, an automated resident drone performed inspections and cargo flights from the substation and vessels.

To reduce Operation and Maintenance (O&M) costs on offshore wind farms, wherein 80% of the O&M cost relates to deploying personnel, the offshore wind sector looks to robotics and Artificial Intelligence (AI) for solutions. Barriers to Beyond Visual Line of Sight (BVLOS) robotics include operational safety compliance and resilience, inhibiting the commercialization of autonomous services offshore. To address safety and resilience challenges we propose a symbiotic system; reflecting the lifecycle learning and co-evolution with knowledge sharing for mutual gain of robotic platforms and remote human operators. Our methodology enables the run-time verification of safety, reliability and resilience during autonomous missions. We synchronize digital models of the robot, environment and infrastructure and integrate front-end analytics and bidirectional communication for autonomous adaptive mission planning and situation reporting to a remote operator. A reliability ontology for the deployed robot, based on our holistic hierarchical-relational model, supports computationally efficient platform data analysis. We analyze the mission status and diagnostics of critical sub-systems within the robot to provide automatic updates to our run-time reliability ontology, enabling faults to be translated into failure modes for decision making during the mission. We demonstrate an asset inspection mission within a confined space and employ millimeter-wave sensing to enhance situational awareness to detect the presence of obscured personnel to mitigate risk. Our results demonstrate a symbiotic system provides an enhanced resilience capability to BVLOS missions. A symbiotic system addresses the operational challenges and reprioritization of autonomous mission objectives. This advances the technology required to achieve fully trustworthy autonomous systems.

A Simulation of UAV Power Optimization via Reinforcement Learning

This paper demonstrates a reinforcement learning approach to the optimization of power consumption in a UAV system in a simplified data collection task. Here, the architecture consists of two common reinforcement learning algorithms, Q-learning and Sarsa, which are implemented through a combination of robot operating system (ROS) and Gazebo. The effect of wind as an influential factor was simulated. The implemented algorithm resulted in reasonable adjustment of UAV actions to the wind field in order to minimize its power consumption during task completion over the domain.

The enterprise drone market is ascending rapidly. Goldman Sachs estimated that businesses will spend $13 billion on drones between now and 2020. Promising commercial applications for drones range from emergency response and firefighting to surveying farmland and grocery delivery. However, as is the case with any new and innovative technology, there have been some speed bumps along the way that must be delicately navigated before broad adoption sets in. One of the most common speed bumps for businesses is the challenge of analyzing the vast volumes of data collected by drones.

Utilities in Europe to use long-distance drones for inspections

Prototypes of BVLOS drones, so called because they travel "beyond the visual line of sight" of operators, are being tested by Italy's Snam, Europe's largest gas utility, and EDF's network subsidiary, RTE in France. Snam told Reuters they have been doing field-testing with BVLOS drones in the Apennine hills around Genoa. It hopes to have it scouting a 20 kilometer (12.4 miles) stretch of pipeline soon. RTE has also been testing a long-distance drone that have flown 50 kilometers (31 miles) inspecting transmission lines and sending back data that allowed technicians to create a virtual model of a section of the grid. The Ivorian Electricity Company (CIE) is using drones to revolutionise the inspection of its infrastructure SIA KAMBOU, AFP/File At the present time, utilities are using helicopters equipped with cameras for inspecting their power grids, and in some cases use "basic" drones that stay within the sight of operators for inspections.

Aerones, a Latvia-based company that specializes in building heavy-lifting drones, created a drone solution for wind turbine maintenance. Using drones to clean or defrost the blades enables maintenance crews to complete these tasks faster and in a much safer way.

The two biggest societal challenges for the twenty-first century are also the biggest opportunities – automation and climate change. The epitaph of fossil fuels with its dark cloud burning a hole in the ozone layer is giving way to a rise of solar and wind farms worldwide. Servicing these plantations are fleets of robots and drones, providing greater possibilities of expanding CleanTech to the most remote regions of the planet. 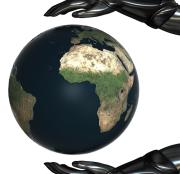 The two biggest societal challenges for the twenty-first century are also the biggest opportunities – automation and climate change. The epitaph of fossil fuels with its dark cloud burning a hole in the ozone layer is giving way to a rise of solar and wind farms worldwide. Servicing these plantations are fleets of robots and drones, providing greater possibilities of expanding CleanTech to the most remote regions of the planet.

Lockheed Martin's interest in a San Diego start-up shows how big aerospace companies are pushing the drone revolution out to sea. Lockheed Martin Ventures last month invested an undisclosed amount in San Diego-based Ocean Aero -- a 25-employee start-up that is developing the Submaran, a solar- and wind-powered ocean drone capable of operating above and below the surface. "The ability to be environmentally powered allows us to maneuver at great persistence because it's renewable," said Eric Patten, chief executive of Ocean Aero and a former Navy officer. "And then to be able to transition that vehicle from the surface to a sub-surface vehicle that has significant capability under water, that is truly unique." Lockheed Martin Venture typically invests $1 million to $5 million in young companies.