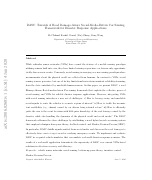 While vehicular sensor networks (VSNs) have earned the stature of a mobile sensing paradigm utilizing sensors built into cars, they have limited sensing scopes since car drivers only opportunistically discover new events. Conversely, social sensing is emerging as a new sensing paradigm where measurements about the physical world are collected from humans. In contrast to VSNs, social sensing is more pervasive, but one of its key limitations lies in its inconsistent reliability stemming from the data contributed by unreliable human sensors. In this paper, we present DASC, a road Damage-Aware Social-media-driven Car sensing framework that exploits the collective power of social sensing and VSNs for reliable disaster response applications. However, integrating VSNs with social sensing introduces a new set of challenges: i) How to leverage noisy and unreliable social signals to route the vehicles to accurate regions of interest? ii) How to tackle the inconsistent availability (e.g., churns) caused by car drivers being rational actors? iii) How to efficiently guide the cars to the event locations with little prior knowledge of the road damage caused by the disaster, while also handling the dynamics of the physical world and social media? The DASC framework addresses the above challenges by establishing a novel hybrid social-car sensing system that employs techniques from game theory, feedback control, and Markov Decision Process (MDP). In particular, DASC distills signals emitted from social media and discovers the road damages to effectively drive cars to target areas for verifying emergency events. We implement and evaluate DASC in a reputed vehicle simulator that can emulate real-world disaster response scenarios. The results of a real-world application demonstrate the superiority of DASC over current VSNs-based solutions in detection accuracy and efficiency.