New York (CNN Business)Talk of a possible Apple car is back. Apple (AAPL) hasn't commented publicly on its plans for the project, nicknamed Titan, so it's not clear exactly what will come of the effort. Some who follow the company think it could release a whole Apple-branded, electric, self-driving car. Others think it's more likely Apple will partner with existing automakers to sell an operating system (iDrive, maybe?), self-driving tools or other technology. There are some clues available, though.

Toyota insists its e-Palette is more than a concept car

There's one thing that keeps Toyota CEO Akio Toyoda up at night. Or what he's going to have for breakfast the next day. It's technology juggernauts like Facebook, Google and Apple and what might happen when they decide to enter the automotive industry proper. Will the company be ready? Is it doing enough to stay ahead of a potential broadside from Silicon Valley? The answer, Toyoda believes, is to morph Toyota into a data and smart mobility company.

Tesla just announced it's newest, largest supercharger stations in the US.

Nissan's Singing EV, Tesla Autopilot Troubles, and More This Week in the Future of Cars

In my grumpy days of trying to be a cool teenager, I considered musicals stupid. Why all the singing, I'd complain, when they could just spit it out? Years of experience and the realization that true coolness is either a) not about mocking musicals or b) unattainable, eventually brought me around. My point here is that it took me a while to realize sometimes, you've just gotta belt it out. And so I understand what's going on with Nissan's IMx concept, which sings not just because it's finally where the people are, but because it wants to save lives.

Renault-Nissan and Mitsubishi are joining forces to produce electric and hybrid cars and become "a global leader in ride-hailing services," they announced. The group, called Alliance 2022, will partner up on 12 electric cars and 40 vehicles with autonomous driving tech by, you guessed it, 2022. "With the emissions rules coming in, it's the end of gas," said Alliance 2022 CEO Carlos Ghosn in a statement. "Between now and 2040 there will be no more diesel and gasoline. This is absolutely a scenario."

5 important stories you may have missed 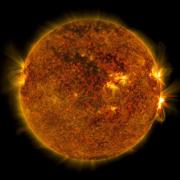 An X8.2 class solar flare flashes in the edge of the Sun on Sept. 10, 2017. There were seven such solar flares in seven days, beginning last week. All eyes were on Hurricane Irma last week as the storm roared across the Caribbean and the southeastern United States, flattening buildings and tossing debris across homes and streets, killing at least 47 and putting hundreds of thousands in shelters. Though analysts had expected the storm to cause the most damage in Florida, it devastated islands like St. Martin and Barbuda, which officials say will take years to rebuild. It's not yet clear how much the damage will cost -- either in Florida, where millions remain without power, or in Texas, which is still recovering from Hurricane Harvey -- or how much more money Congress can free up to help.

I'm extremely nervous to be behind the wheel of the 1902 model (built in 1903) Mercedes Simplex 40. The controls and open air sitting position remind me more of a John Deere tractor than the cars that currently fill our cities and interstates. After a quick tutorial, I got in, depressed the clutch, reached outside the cab to put the vehicle in first gear and nearly stalled an automobile that was the pinnacle of tech when it was built. Many of the design decisions made for the Simplex have ended up permeating most of the automotive world even up until today -- including putting the radiator up front, spark plugs and more importantly not looking like a horse carriage without a horse. The Simplex 40 also became the vehicle that set the automaker up as a sport luxury brand after the Simplex was entered in, and won, multiple races at the time of its launch.

Pre-sales for the Baojun E100 began on July 10, and already more than, 5,000 people have registered for the first 200 cars. Another 500 vehicle will be available starting tomorrow, with sales initially limited to Guangxi. The $5,300 cost is after local and national subsidies. The car was developed in conjunction with state-owned SAIC, one of the largest manufacturers in China, which GM has been working with since 2001. Together, the two firms have been selling cars (including 1.5 million last year alone) under the Wuling and Baojun brand names, creating a pairing known as SGMW. With a wheelbase of only 5.25 feet and a height of only 5.48 feet, the Baojun E100 is truly tiny The lithium-ion battery can charge fully in 7.5 hours and is also capable of capturing energy through a regenerative braking system