January 22, 2018 in Culver City: A Tesla Model S hit the back of a fire truck parked at an accident in Culver City around 8:30 am on Interstate 405 using the cars Autopilot system. The Tesla, which was going 65mph, suffered'significant damage' and the firetruck was taken out of service for body work. May 30, 2018 in Laguna Beach: Authorities said a Tesla sedan in Autopilot mode crashed into a parked police cruiser in Laguna Beach. Laguna Beach Police Sgt. Jim Cota says the officer was not in the cruiser during the crash. He said the Tesla driver suffered minor injuries.

Lyft is planning to deploy a massive driverless car fleet beginning in 2023. In anticipation of that milestone the company, which has partnered with self-driving car developer Motional, is updating its existing robotaxi service in Las Vegas with brand new all-electric models. The IONIQ-5 vehicles, developed by Motional atop a Hyundai platform, provide L4 autonomy and utilize a Continuous Learning Framework (CLF) designed to make the vehicles safer with every mile driven. Motional is a joint venture of Hyundai Motor Group and auto supplier Aptiv. "We will be deploying our robotaxis in major markets through our partnerships with ride-hailing networks," Motional's VP of Engineering & Head Autonomy, Sammy Omari, told ZDNet earlier this year.

NAVYA, an autonomous mobility systems leader, announces a new partnership with Inverness Campus to deploy a new project with a Navya Autonom shuttle. Inverness Campus is hosting the first Autonomous Vehicle (AV) passenger service pilot in Scotland. The AV vehicle has arrived in the Highlands and the eagerly awaited trials are now underway and will continue until March, next year. Promoting the scheme is HITRANS, the regional transport partnership for the Highlands and Islands, which is committed to encouraging multi-modal travel and moving away from private car use. HITRANS has attracted European funding – through the Planning for Autonomous Vehicles (PAV) project, funded by the Interreg North Sea Region Programme – and is working with a number of partners to deliver the project.

A'deeply disturbing' video claims to show a Tesla in full self-driving mode running over a child-size mannequin during a test by a safety campaign group. The Dawn Project said the vehicle failed to detect the stationary dummy's presence in the road and hit it over and over again at an average speed of 25mph. It claims that the experiment was carried out under'controlled conditions' on a test track in California. Tesla, which was founded by billionaire entrepreneur Elon Musk, has been approached for a comment by MailOnline but is yet to respond to the video. The US National Highway Traffic Safety Administration (NHTSA) confirmed that it'currently has an open and active investigation of Tesla's Autopilot active driver assistance system'. 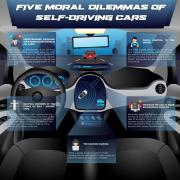 Whether men or women make better drivers has has long been a hotly-debated topic. While the latter historically take more jibes about their skills behind the wheel, studies have shown that female drivers are far less likely to commit driving offences. But with driverless cars getting closer to reality, engineers are looking closely at all factors that affect their safety. A new study from Newcastle University has revealed that autonomous vehicles may need to be fitted with gender-specific settings - as women are better at using them than men. Their research found that females were better at taking back control of the vehicle when required to respond to a hazard.

The electric revolution is in full swing and has opened the doors to an autonomous, self-driving future. Today's modern cars are capable of Level 2 autonomy using an array of ADAS (Advanced Driver-Assistance Systems) driving aids like adaptive cruise control and automatic emergency braking, to name a few. However, legacy automakers like Mercedes-Benz, General Motors, Ford, and BMW are forging Tesla's path in perfecting Level 3 autonomous driving. Self-driving cars are just a stone's throw away from production reality, but there's a new breed of electric vehicles making waves for their innovative applications of self-driving technology. We're talking about a silent (literally) revolution led by driverless delivery vehicles.

The core of Self-driving Car Technology

A self-driving car seems like some amazing stuff in a science fiction movie. Thankfully, today's technology revolution makes it possible to own or experience such vehicles. Recently, Baidu launched a new model Apollo RT6, a robotaxi/self-driving cab in China. Nearly one million rides have already been taken in China via robotaxis in almost ten cities. However, this new model is supposed to be the next big thing in the car market.

Apple Automobile rumors: Every part it's worthwhile to know - Channel969

Apple is broadly anticipated to unveil an Apple Automobile within the coming years. It can most definitely be an autonomous electrical automobile, manufactured in partnership with a longtime automotive maker. We all know a complete lot extra about Apple Automobile than we used to, so here is a rundown of every part we (suppose we) know. When precisely is an Apple Automobile coming? Effectively, it will not be for just a few years simply but. Outstanding analysts and leakers have acknowledged that it might be 2025 on the earliest. Different stories have instructed that it might launch in 2024, while Bloomberg's Mark Gurman has echoed Kuo stating a automotive is "at the least" 5 years away.