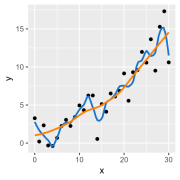 In a supervised learning setting, we have a yardstick or plumbline to judge how well we are doing: the response itself. A frequent question in biological and biomedical applications is whether a property of interest (say, disease type, cell type, the prognosis of a patient) can be "predicted", given one or more other properties, called the predictors. Often we are motivated by a situation in which the property to be predicted is unknown (it lies in the future, or is hard to measure), while the predictors are known. The crucial point is that we learn the prediction rule from a set of training data in which the property of interest is also known. Once we have the rule, we can either apply it to new data, and make actual predictions of unknown outcomes; or we can dissect the rule with the aim of better understanding the underlying biology. Compared to unsupervised learning and what we have seen in Chapters 5, 7 and 9, where we do not know what we are looking for or how to decide whether our result is "right", we are on much more solid ground with supervised learning: the objective is clearly stated, and there are straightforward criteria to measure how well we are doing. The central issues in supervised learning151151 Sometimes the term statistical learning is used, more or less exchangeably. Or did our rule indeed pick up some of the pertinent patterns in the system being studied, which will also apply to yet unseen new data? An example for overfitting: two regression lines are fit to data in the \((x, y)\)-plane (black points). We can think of such a line as a rule that predicts the \(y\)-value, given an \(x\)-value. Both lines are smooth, but the fits differ in what is called their bandwidth, which intuitively can be interpreted their stiffness. The blue line seems overly keen to follow minor wiggles in the data, while the orange line captures the general trend but is less detailed. The effective number of parameters needed to describe the blue line is much higher than for the orange line. Also, if we were to obtain additional data, it is likely that the blue line would do a worse job than the orange line in modeling the new data. We'll formalize these concepts –training error and test set error– later in this chapter. Although exemplified here with line fitting, the concept applies more generally to prediction models. See exemplary applications that motivate the use of supervised learning methods.

Despite its almost ubiquitous use in the business industry and social sciences, time series analysis and by extension time series forecasting is one of the least understood machine learning methods new data scientists and machine learning engineers are undertaking. The purpose of this blog is to provide an overview of this lesser-known but incredibly important machine learning technique. To answer this question, let's take a step back to discuss the types of data that we use for typical regression and classification tasks. When we make a prediction about a new observation, that model is built from hundreds or thousands of previous observations that are either all captured at a single point in time, or from data points in which time does not matter. This is known as cross-sectional data.

There has been much recent progress in forecasting the next observation of a linear dynamical system (LDS), which is known as the improper learning, as well as in the estimation of its system matrices, which is known as the proper learning of LDS. We present an approach to proper learning of LDS, which in spite of the non-convexity of the problem, guarantees global convergence of numerical solutions to a least-squares estimator. We present promising computational results.

Graphs are versatile tools for representing structured data. Therefore, a variety of machine learning methods have been studied for graph data analysis. Although many of those learning methods depend on the measurement of differences between input graphs, defining an appropriate distance metric for a graph remains a controversial issue. Hence, we propose a supervised distance metric learning method for the graph classification problem. Our method, named interpretable graph metric learning (IGML), learns discriminative metrics in a subgraph-based feature space, which has a strong graph representation capability. By introducing a sparsity-inducing penalty on a weight of each subgraph, IGML can identify a small number of important subgraphs that can provide insight about the given classification task. Since our formulation has a large number of optimization variables, an efficient algorithm is also proposed by using pruning techniques based on safe screening and working set selection methods. An important property of IGML is that the optimality of the solution is guaranteed because the problem is formulated as a convex problem and our pruning strategies only discard unnecessary subgraphs. Further, we show that IGML is also applicable to other structured data such as item-set and sequence data, and that it can incorporate vertex-label similarity by using a transportation-based subgraph feature. We empirically evaluate the computational efficiency and classification performance on several benchmark datasets and show some illustrative examples demonstrating that IGML identifies important subgraphs from a given graph dataset.

We consider the problem of sampling from a strongly log-concave density in $\mathbb{R}^{d}$, and prove an information theoretic lower bound on the number of stochastic gradient queries of the log density needed. Several popular sampling algorithms (including many Markov chain Monte Carlo methods) operate by using stochastic gradients of the log density to generate a sample; our results establish an information theoretic limit for all these algorithms. We show that for every algorithm, there exists a well-conditioned strongly log-concave target density for which the distribution of points generated by the algorithm would be at least $\varepsilon$ away from the target in total variation distance if the number of gradient queries is less than $\Omega(\sigma^2 d/\varepsilon^2)$, where $\sigma^2 d$ is the variance of the stochastic gradient. Our lower bound follows by combining the ideas of Le Cam deficiency routinely used in the comparison of statistical experiments along with standard information theoretic tools used in lower bounding Bayes risk functions. To the best of our knowledge our results provide the first nontrivial dimension-dependent lower bound for this problem.

--One problem found when working with satellite images is the radiometric variations across the image and different images. Intending to improve remote sensing models for the classification of burnt areas, we set two objectives. The first is to understand the relationship between feature spaces and the predictive ability of the models, allowing us to explain the differences between learning and generalization when training and testing in different datasets. We find that training on datasets built from more than one image provides models that generalize better . These results are explained by visualizing the dispersion of values on the feature space. The second objective is to evolve hyper-features that improve the performance of different classifiers on a variety of test sets. We find the hyper-features to be beneficial, and obtain the best models with XGBoost, even if the hyper-features are optimized for a different method. Deforestation has serious implications on biodiversity, on rural communities that depend on forests for survival, and on greenhouse gas emissions that drive the global climate. The machine learning (ML) community can help by providing predictive models that, after learning from a small sample of an image, can automatically classify the whole image. Although previous ML work in forest monitoring has shown good results, the predictive models are often applied on the same location where they were learnt, i.e., the models are trained and tested in samples from the same dataset (e.g., [1]) or time series from the same area (e.g., [2]).

We provide a novel approach and an exploratory study for modelling life event choices and occurrence from a probabilistic perspective through causal discovery and survival analysis. Our approach is formulated as a bi-level problem. In the upper level, we build the life events graph, using causal discovery tools. In the lower level, for the pairs of life events, time-to-event modelling through survival analysis is applied to model time-dependent transition probabilities. Several life events were analysed, such as getting married, buying a new car, child birth, home relocation and divorce, together with the socio-demographic attributes for survival modelling, some of which are age, nationality, number of children, number of cars and home ownership. The data originates from a survey conducted in Dortmund, Germany, with the questionnaire containing a series of retrospective questions about residential and employment biography, travel behaviour and holiday trips, as well as socio-economic characteristic. Although survival analysis has been used in the past to analyse life-course data, this is the first time that a bi-level model has been formulated. The inclusion of a causal discovery algorithm in the upper-level allows us to first identify causal relationships between life-course events and then understand the factors that might influence transition rates between events. This is very different from more classic choice models where causal relationships are subject to expert interpretations based on model results.

Towards a Kernel based Physical Interpretation of Model Uncertainty

This paper introduces a new information theoretic framework that provides a sensitive multi-modal quantification of data uncertainty by imposing a quantum physical description of its metric space. We specifically work with the kernel mean embedding metric which, apart from rendering a statistically rich data-induced representation of the signal's PDF in the RKHS, yields an intuitive physical interpretation of the signal as a potential field, resulting in its new energy based formulation. This enables one to extract multi-scale uncertainty features of data in the form of information eigenmodes by utilizing moment decomposition concepts of quantum physics. In essence, we decompose local realizations of the signal's PDF in terms of quantum uncertainty moments. Owing to its kernel basis and multi-modal nature, we postulate that such a framework would serve as a powerful surrogate tool for quantifying model uncertainty. We therefore specifically present the application of this framework as a non-parametric and non-intrusive surrogate tool for predictive uncertainty quantification of point-prediction neural network models, overcoming various limitations of conventional Bayesian and ensemble based UQ methods. Experimental comparisons with some established uncertainty quantification methods illustrate performance advantages exhibited by our framework.