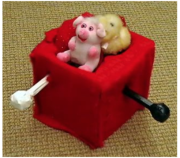 Despite recent advances in artificial intelligence (AI) research, human children are still by far the best learners we know of, learning impressive skills like language and high-level reasoning from very little data. Children's learning is supported by highly efficient, hypothesis-driven exploration: in fact, they explore so well that many machine learning researchers have been inspired to put videos like the one below in their talks to motivate research into exploration methods. However, because applying results from studies in developmental psychology can be difficult, this video is often the extent to which such research actually connects with human cognition. Why is directly applying research from developmental psychology to problems in AI so hard? For one, taking inspiration from developmental studies can be difficult because the environments that human children and artificial agents are typically studied in can be very different.

Machine learning is a concept that is as old as computers. In 1950, Alan Turing created the Turning Test. It was a test for computers to see if a machine can convince a human it is a human and not a computer. Soon after that, in 1952, Arthur Samuel designed the first computer program where a computer can learn as it ran. This program was a checker game, where the computer learned the player's patterns during the match, and then use this knowledge to improve the computer's next moves.

Reverb: a framework for experience replay

The use of experience plays a key role in reinforcement learning (RL). How best to use this data is one of the central problems of this field. As RL agents have advanced over recent years, taking on bigger and more complex problems (Atari, Go, StarCraft, Dota), the generated data has grown in both size and complexity. To cope with this complexity many RL systems split the learning problem into two distinct parts: experience producers (actors) and experience consumers (learners) — allowing these different parts to run in parallel. Often a data storage system lies at the intersection between these two components. The question of how to efficiently store and transport the data is itself a challenging engineering problem.

Recently, AlphaZero has achieved landmark results in deep reinforcement learning, by providing a single self-play architecture that learned three different games at super human level. AlphaZero is a large and complicated system with many parameters, and success requires much compute power and fine-tuning. Reproducing results in other games is a challenge, and many researchers are looking for ways to improve results while reducing computational demands. AlphaZero's design is purely based on self-play and makes no use of labeled expert data or domain specific enhancements; it is designed to learn from scratch. We propose a novel approach to deal with this cold-start problem by employing simple search enhancements at the beginning phase of self-play training, namely Rollout, Rapid Action Value Estimate (RAVE) and dynamically weighted combinations of these with the neural network, and Rolling Horizon Evolutionary Algorithms (RHEA). Our experiments indicate that most of these enhancements improve the performance of their baseline player in three different (small) board games, with especially RAVE based variants playing strongly.

This paper proposes a Deep Reinforcement Learning (DRL) approach for solving knapsack problem. The proposed method consists of a state aggregation step based on tabular reinforcement learning to extract features and construct states. The state aggregation policy is applied to each problem instance of the knapsack problem, which is used with Advantage Actor Critic (A2C) algorithm to train a policy through which the items are sequentially selected at each time step. The method is a constructive solution approach and the process of selecting items is repeated until the final solution is obtained. The experiments show that our approach provides close to optimal solutions for all tested instances, outperforms the greedy algorithm, and is able to handle larger instances and more flexible than an existing DRL approach. In addition, the results demonstrate that the proposed model with the state aggregation strategy not only gives better solutions but also learns in less timesteps, than the one without state aggregation.

Traditional centralized multi-agent reinforcement learning (MARL) algorithms are sometimes unpractical in complicated applications, due to non-interactivity between agents, curse of dimensionality and computation complexity. Hence, several decentralized MARL algorithms are motivated. However, existing decentralized methods only handle the fully cooperative setting where massive information needs to be transmitted in training. The block coordinate gradient descent scheme they used for successive independent actor and critic steps can simplify the calculation, but it causes serious bias. In this paper, we propose a flexible fully decentralized actor-critic MARL framework, which can combine most of actor-critic methods, and handle large-scale general cooperative multi-agent setting. A primal-dual hybrid gradient descent type algorithm framework is designed to learn individual agents separately for decentralization. From the perspective of each agent, policy improvement and value evaluation are jointly optimized, which can stabilize multi-agent policy learning. Furthermore, our framework can achieve scalability and stability for large-scale environment and reduce information transmission, by the parameter sharing mechanism and a novel modeling-other-agents methods based on theory-of-mind and online supervised learning. Sufficient experiments in cooperative Multi-agent Particle Environment and StarCraft II show that our decentralized MARL instantiation algorithms perform competitively against conventional centralized and decentralized methods.

A Game Theoretic Framework for Model Based Reinforcement Learning

Model-based reinforcement learning (MBRL) has recently gained immense interest due to its potential for sample efficiency and ability to incorporate off-policy data. However, designing stable and efficient MBRL algorithms using rich function approximators have remained challenging. To help expose the practical challenges in MBRL and simplify algorithm design from the lens of abstraction, we develop a new framework that casts MBRL as a game between: (1) a policy player, which attempts to maximize rewards under the learned model; (2) a model player, which attempts to fit the real-world data collected by the policy player. For algorithm development, we construct a Stackelberg game between the two players, and show that it can be solved with approximate bi-level optimization. This gives rise to two natural families of algorithms for MBRL based on which player is chosen as the leader in the Stackelberg game. Together, they encapsulate, unify, and generalize many previous MBRL algorithms. Furthermore, our framework is consistent with and provides a clear basis for heuristics known to be important in practice from prior works. Finally, through experiments we validate that our proposed algorithms are highly sample efficient, match the asymptotic performance of model-free policy gradient, and scale gracefully to high-dimensional tasks like dexterous hand manipulation.

Multi-Agent Reinforcement Learning (MARL) encompasses a powerful class of methodologies that have been applied in a wide range of fields. An effective way to further empower these methodologies is to develop libraries and tools that could expand their interpretability and explainability. In this work, we introduce MARLeME: a MARL model extraction library, designed to improve explainability of MARL systems by approximating them with symbolic models. Symbolic models offer a high degree of interpretability, well-defined properties, and verifiable behaviour. Consequently, they can be used to inspect and better understand the underlying MARL system and corresponding MARL agents, as well as to replace all/some of the agents that are particularly safety and security critical.

Meta-Learning in Neural Networks: A Survey

The field of meta-learning, or learning-to-learn, has seen a dramatic rise in interest in recent years. Contrary to conventional approaches to AI where a given task is solved from scratch using a fixed learning algorithm, meta-learning aims to improve the learning algorithm itself, given the experience of multiple learning episodes. This paradigm provides an opportunity to tackle many of the conventional challenges of deep learning, including data and computation bottlenecks, as well as the fundamental issue of generalization. In this survey we describe the contemporary meta-learning landscape. We first discuss definitions of meta-learning and position it with respect to related fields, such as transfer learning, multi-task learning, and hyperparameter optimization. We then propose a new taxonomy that provides a more comprehensive breakdown of the space of meta-learning methods today. We survey promising applications and successes of meta-learning including few-shot learning, reinforcement learning and architecture search. Finally, we discuss outstanding challenges and promising areas for future research.

While deep neural networks (DNNs) and Gaussian Processes (GPs) are both popularly utilized to solve problems in reinforcement learning, both approaches feature undesirable drawbacks for challenging problems. DNNs learn complex nonlinear embeddings, but do not naturally quantify uncertainty and are often data-inefficient to train. GPs infer posterior distributions over functions, but popular kernels exhibit limited expressivity on complex and high-dimensional data. Fortunately, recently discovered conjugate and neural tangent kernel functions encode the behavior of overparameterized neural networks in the kernel domain. We demonstrate that these kernels can be efficiently applied to regression and reinforcement learning problems by analyzing a baseline case study. We apply GPs with neural network dual kernels to solve reinforcement learning tasks for the first time. We demonstrate, using the well-understood mountain-car problem, that GPs empowered with dual kernels perform at least as well as those using the conventional radial basis function kernel. We conjecture that by inheriting the probabilistic rigor of GPs and the powerful embedding properties of DNNs, GPs using NN dual kernels will empower future reinforcement learning models on difficult domains.