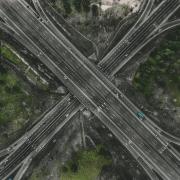 A key challenge in online learning is that classical algorithms can be slow to adapt to changing environments. Recent studies have proposed "meta" algorithms that convert any online learning algorithm to one that is adaptive to changing environments, where the adaptivity is analyzed in a quantity called the strongly-adaptive regret. This paper describes a new meta algorithm that has a strongly-adaptive regret bound that is a factor of $\sqrt{\log(T)}$ better than other algorithms with the same time complexity, where $T$ is the time horizon. We also extend our algorithm to achieve a first-order (i.e., dependent on the observed losses) strongly-adaptive regret bound for the first time, to our knowledge. At its heart is a new parameter-free algorithm for the learning with expert advice (LEA) problem in which experts sometimes do not output advice for consecutive time steps (i.e., \emph{sleeping} experts). This algorithm is derived by a reduction from optimal algorithms for the so-called coin betting problem. Empirical results show that our algorithm outperforms state-of-the-art methods in both learning with expert advice and metric learning scenarios.

Be a Technology Creator Today!!! Discover the scientist in you. Are you excited to create something immediately without getting into too much subject theory which bores you? Then you have landed at the right course. Research has shown that theoretical learning leads to decrease in interest in the subject and is one of the biggest hindrances to learn new things or new Technology. That's why we have created a course for every body where you start building applications and learn theory along with it.