The Beginner's Guide to Artificial Intelligence in Unity.

Do your non-player characters lack drive and ambition? Are they slow, stupid and constantly banging their heads against the wall? Then this course is for you. Join Penny as she explains, demonstrates and assists you in creating your very own NPCs in Unity with C#. All you need is a sound knowledge of Unity, C# and the ability to add two numbers together. In this course, Penny reveals the most popular AI techniques used for creating believable character behaviour in games using her internationally acclaimed teaching style and knowledge from over 25 years working with games, graphics and having written two award winning books on games AI.

TL;DR: The 2022 Premium Learn Game Development Bundle is on sale for £14.81, saving you 98% on list price. You've heard about how beneficial it is to learn to code, but if you're like most people, you haven't found a reason to learn. What if we told you that with just 130 hours of coding education, completed from your sofa, you could launch your very own video game? With the 2022 Premium Learn Game Development Bundle, you can bring the video game idea you've had up your sleeve to fruition. It's just £15 for six courses and 130 hours of training you can complete on your own schedule. How else were you planning on spending your time indoors this season?

Got a brilliant game idea? Bring it to life in the new year with this $20 training

TL;DR: As of Jan. 1, get The 2022 Premium Learn Game Development Bundle for just $20 instead of its $970 value (a 98% discount). If you've been sitting on a great idea for a game, but haven't had a clue how to bring it to life, it's about time you signed up for some training. There's no time like the new year to reinvent yourself and do all the things you always wanted to do. Tomorrow isn't guaranteed, after all. The 2022 Premium Learn Game Development Bundle is your ticket to creating your very own video games -- and launching them -- from scratch.

From Grand Theft Auto to world peace: can a video game help to change the world?

It was while fleeing the civil war in South Sudan that Lual Mayen's mother gave birth to him 28 years ago. She had four children in tow and was near to the border with Uganda, in a town called Aswa. The journey was difficult; Mayen's two sisters died on the way and he became sick. No one thought he would survive. "I can't imagine what she had to go through. There was no food, no water, nothing," says Mayen. "I remember she said she was not the only woman who gave birth on the way. Other women abandoned their children because they didn't want them to suffer. But my mother thought: "He is a gift for me, I have to keep him."' Mayen's mother made it to northern Uganda with her newborn son and reunited with her husband in a refugee camp that remained their home for the next 22 years. Mayen grew up there, and although life was a struggle, he was happy and grateful for what he had. There wasn't much to do but Mayen says he found creative ways to keep himself entertained. Then, one day he had the chance to play the video game Grand Theft Auto, which mostly revolves around driving and shooting. "While I was playing, this thought came into my mind," he remembers. "In South Sudan, most of the population is under 30.

Fifty Years of P vs. NP and the Possibility of the Impossible 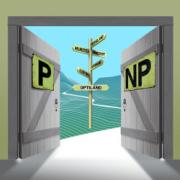 Lance Fortnow (lfortnow@iit.edu) is a professor and dean of the College of Computing at Illinois Institute of Technology, Chicago, IL, USA.

Learn to create your own video games with Unity, Unreal, and Blender for just $40

TL;DR: Get the 2022 Premium Learn Game Development Bundle, valued at $970, for just $40 as of Dec. 17 -- that's a discount of 96%. You've heard about how beneficial it is to learn to code, but if you're like most people, you haven't found a reason to learn. What if we told you that with just 130 hours of coding education, completed from your couch, you could launch your very own video game? With the 2022 Premium Learn Game Development Bundle, you can bring the video game idea you've had up your sleeve to fruition. It's just $40 for six courses and 130 hours of training you can complete on your own schedule. How else were you planning on spending your time indoors this season?

Procedural storytelling is exploding the possibilities of video game narratives

Procedural stories in video games often induce a specific kind of delight. You'll know when it hits -- a realization that the code and algorithms of the game seem to be generating a coherent narrative from your own impulsive, seemingly chaotic actions. It's what 2020's viral sensation Blaseball and this year's breakout indie hit, Wildermyth, share in common -- two strikingly different games whose reactive stories are nevertheless cut from the very same cloth. Players have grown accustomed to procedural generation in a spatial sense. Just look at the endless variations of levels that define games such as Hades in the ever-popular rogue-like genre and the infinite planets that populate the virtual universe of 2016's No Man's Sky.

Real-world tasks of interest are generally poorly defined by human-readable descriptions and have no pre-defined reward signals unless it is defined by a human designer. Conversely, data-driven algorithms are often designed to solve a specific, narrowly defined, task with performance metrics that drives the agent's learning. In this work, we present the solution that won first place and was awarded the most human-like agent in the 2021 NeurIPS Competition MineRL BASALT Challenge: Learning from Human Feedback in Minecraft, which challenged participants to use human data to solve four tasks defined only by a natural language description and no reward function. Our approach uses the available human demonstration data to train an imitation learning policy for navigation and additional human feedback to train an image classifier. These modules, together with an estimated odometry map, are then combined into a state-machine designed based on human knowledge of the tasks that breaks them down in a natural hierarchy and controls which macro behavior the learning agent should follow at any instant. We compare this hybrid intelligence approach to both end-to-end machine learning and pure engineered solutions, which are then judged by human evaluators.