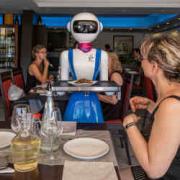 University of South Australia's Habib Habibullah says their algorithm could be applied in many environments, including industrial warehouses where robots are commonly used, for robotic fruit picking, packing and pelletizing, and also for restaurant robots An algorithm developed by researchers at the University of South Australia (UniSA) aims to help robots avoid humans and other obstacles in their path while taking the fastest, safest route to their destination. The researchers based their model on the best elements of existing algorithms and used it to create a TurtleBot able to avoid collisions by adjusting its speed and direction. They performed simulations in nine different scenarios and found their model outperformed the online collision avoidance algorithms Dynamic Window Approach and Artificial Potential Field. Said UniSA's Habib Habibullah, "Our proposed method sometimes took a longer path, but it was faster and safer, avoiding all collisions."