What's Going On With the Teenager Suing Apple Over Facial Recognition Technology?

Ousmane Bah, an 18-year-old college student from New York, filed a lawsuit against Apple on Monday for allegedly relying on facial recognition systems that misidentified him as a serial shoplifter. The suit claims that Apple and its contractor, Security Industry Specialists, caused Bah to suffer emotional distress as a result. Apple has subsequently denied that it uses facial recognition in its stores. According to the lawsuit, Bah received a summons arraignment last summer from a Boston municipal court for the theft of $1,200 worth of products from an Apple Store in the city. The police report indicated that a Security Industry Specialists loss prevention associate saw the theft on a security video and recognized Bah from a similar incident at an Apple Store in Connecticut. 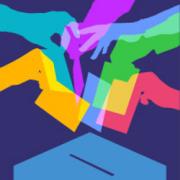 The ACM constitution provides that our Association hold a general election in the even-numbered years for the positions of President, Vice President, Secretary/Treasurer, and Members-at-Large. Biographical information and statements of the candidates appear on the following pages (candidates' names appear in random order). In addition to the election of ACM's officers--President, Vice President, Secretary/Treasurer--five Members-at-Large will be elected to serve on ACM Council. Please refer to the instructions posted at https://www.esc-vote.com/acm2016. To access the secure voting site, you will need to enter your email address (the email address associated with your ACM member record) and your unique PIN provided by Election Services Co. Please return your ballot in the enclosed envelope, which must be signed by you on the outside in the space provided. The signed ballot envelope may be inserted into a separate envelope for mailing if you prefer this method. All ballots must be received by no later than 16:00 UTC on 24 May 2016. Validation by the Tellers Committee will take place at 14:00 UTC on 26 May 2016. Vicki Hanson is a Distinguished Professor of Computing at Rochester Institute of Technology, U.S. (since 2013), Professor and Chair of Inclusive Technologies, Computing, University of Dundee, U.K. (since 2009), and an IBM Research Staff Member Emeritus (since 2009). Previously, she was Research Staff Member and Manager, IBM T.J. Watson Research Center (1986–2008), Research Associate, Haskins Laboratories, New Haven, CT (1980–86), and Postdoctoral Fellow at the Salk Institute for Biological Studies (1978–80). Vicki is the ACM Vice President. She also currently serves as a member of the ACM Executive Committee and Council, on the ACM-W Europe Executive Committee, and on the ACM Fellows Awards Committee (Chair, 2015). She is Vice President at Large of ACM SIGCHI and an ACM Distinguished Speaker. She has served on the SIG Governing Board Executive Committee (2005–14; SGB Chair 2010–12), and as Chair of SIGACCESS, where she revitalized the SIG and established a successful annual conference (ASSETS). She co-founded the field's premier archival journal (ACM Transactions on Accessible Computing) and served as Associate Editor of ACM TWEB. She was on the organizing committee for several SIGPLAN OOPSLA conferences, chaired the recent ACM CEO Search Committee, and currently serves on the Royal Society of Edinburgh Fellows committee (since 2013; Convener 2015). She is an ACM Fellow, a Chartered Fellow of the British Computer Society, a Fellow of the Royal Society of Edinburgh, and a Senior Member of IEEE.