OpenSpace, a platform that helps construction teams track the progress of building projects by capturing 360-degree photos of construction sites, has raised $15.9 million in a series B round of funding led by Menlo Ventures. While the construction sector has never been renowned for efficiency, digital technology is playing a pivotal role in getting the $11 trillion industry back on its feet during the COVID-19 crisis. The construction industry has been particularly hard hit by the pandemic, due to social distancing measures, but AI and remote collaboration tools are making it easier to resume some projects by reducing the number of people required to be on-site. Founded in 2017, San Francisco-based OpenSpace uses AI to automatically create navigable 360-degree photos of construction sites. The software works in tandem with a 360-degree camera, which builders or site managers strap to their hats to document the evolution of a site.

SAN FRANCISCO–(BUSINESS WIRE)–INDUS.AI, a construction software company using computer vision to track and analyze construction project performance in real-time, announced today that it has received an $8 million Series A investment led by Millennium New Horizons with additional participation from strategic investors Foundamental and Groundbreak Ventures. Previous investors Spero Ventures, UP2398, and Bootstrap Labs also joined the round. The new funding will be used to accelerate product development and expand sales, marketing and customer success services. "The construction industry has been a neglected space for too long. This country expends extraordinary energy and capital to build amazing things – tunnels, train stations, skyscrapers and stadiums. But the sad truth is that the vast majority of those projects are painfully over-budget and delayed," said Matt Man, CEO and co-founder.

A checkout-free future might be closer than you think, thanks to startups like Standard Cognition. The San Francisco-based company, whose patented platform uses cameras and algorithms to keep tabs on customers as they peruse store shelves, nabbed $40 million in series A funding last November and a partnership with Paltac in Japan that will see its autonomous checkout solution deployed in 3,000 stores. On the heels of this success, it's secured $35 million in a series B round led by the EQT Ventures fund, with participation from existing investors Initialized Capital, CRV, and Y Combinator. The newfound capital brings Standard Cognition's total raised to date to more than $86 million at a post-money valuation of $535 million. That's more than double the company's valuation as of November 2018, notes CEO Jordan Fisher, and it'll enable Standard Cognition to "continue to focus on making its early customers in the U.S. and Japan successful" while expanding both its team and geographic footprint. 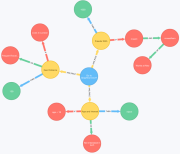 They're a type of non-relational technology that depicts relationships connecting various entities -- for instance, two people in a social network. And if the news today out of graph database company Neo4j is any indication, they're a veritable cash cow. Neo4j announced that it has raised $80 million in a Series E funding round led by One Peak Ventures and Morgan Stanley Expansion Capital, with participation from Creandum, Eight Roads, and Greenbridge Partners. The San Mateo firm has brought in $160 million to date -- the largest cumulative investment in a graph database company, it claims -- and now has over 100 employees across offices in San Francisco and Malmö, Sweden. Emil Eifrem, Neo4j's CEO and cofounder, said the capital would be used to grow its developer tools and support popular use cases, particularly graph-enabled artificial intelligence (AI) and machine learning (ML) systems.