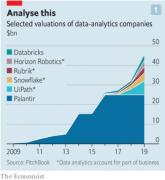 Happy New Year! 2019 has come and gone like Kylo Ren's reign in The Rise of Skywalker, and so it's time for my (13th!) annual prediction piece for VentureBeat. Facial recognition trials will launch in large public venues outside of China. Of course bans of the technology has already occurred, too, in cities like San Francisco and Somerville, MA. Enterprise analytics will become red hot. I predicted this space would reach a third of the value of the workflow platform space by the end of 2019.

'A burger, a coffee, whatever': Food delivery robots may soon roll up to Purdue's campus

These autonomous robots put the special in special delivery and you might see them on a college campus near you! WEST LAFAYETTE, Ind.-- How do delivery robots operate in winter? What if no one picks up the delivery? A board in West Lafayette, Indiana, has unanimously approved a pilot program bringing robotic delivery services to Purdue University, as well as a suspension of city code allowing small, cooler-sized robots to operate on city sidewalks. But first, the board members had several questions about the program from San Francisco-based Starship Technologies before it could debut in September.

It started with pizzas and Walmart groceries delivered in a self-driving car from Ford. Now robot-driven food is catching on with even more new companies and apps. GM's Cruise is working with food delivery service DoorDash to bring your meal from a restaurant to your front door. The two companies announced Thursday that "select customers" in the San Francisco area would soon get to experience autonomous food delivery from one merchant with one self-driving vehicle. More vehicles and restaurants are expected to join in the next six months.

DoorDash will make autonomous food deliveries with help from GM

DoorDash has made it pretty clear that if you're hungry, it's going to be the company that makes sure you get what you want. Over the last year or so it's rolled out group ordering, grocery delivery and even ice cream delivery -- all with sustainability on the agenda. Now, it's making sure you get fed as soon as is absolutely possible, thanks to a partnership with General Motors' Cruise self-driving vehicles. Early this year, a testing program will kick off in San Francisco testing and improving the efficiency of food and grocery delivery via Cruise vehicles. It's the first major consumer-facing partnership for Cruise, which had in the past toyed with the idea of teaming up with Lyft, and subsequently Uber -- evidently it identified a more lucrative market in satisfying hangry customers than in teaming up with companies already under scrutiny for their autonomous efforts.

At least, that's the concept that Kevin Peterson is trying to achieve with his robotics company, Marble. It recently made news for deploying food delivery robots onto the streets of San Francisco. Peterson, Marble's co-founder and software lead, joined this week's AI Podcast to talk about their efforts to integrate AI into the delivery process. Marble's robots, all named "Happy," look like a white boxcar about the size of a mobility scooter. They're complete with a trunk, where it stores packages.

'Tis the season: And for tech gadgets, it's a lot like last year

Jefferson Graham reviews the new GoPro Hero6 camera from a seaplane above San Francisco and an ice cream museum, where the shots are steadier than with previous models on TalkingTech. LOS ANGELES -- The tech shopping season is now started. Apple kicked it off with the release of two new iPhones last week. Wednesday, Amazon joined in with new and lower-priced Echo/Alexa speakers. Thursday, GoPro showed off the latest in a line of Hero cameras, the Hero6, and Friday saw the release of Nintendo's highly coveted Super SNES Classic video game system.

Rules governing the use of food delivery robots remain to be seen across the US. But major food businesses are investigating the possibilities already. In the latest deal, Yelp Eat24 has begun testing delivery by robot in partnership with Marble in select San Francisco neighborhoods. TechCrunch spied Marble's delivery robots, stickered with a Yelp Eat24 logo, earlier this month. But the companies announced their robot delivery service officially today.

It's not every day that you are wandering around your neighborhood and get a glimpse of the future. Yet there I was minding my own business when I bumped into what appeared to be a Yelp/Eat24 "delivery robot" cruising around San Francisco's Mission District on a Friday afternoon. A @Yelp / @Eat24 delivery robot is doing a photo shoot in the mission pic.twitter.com/z4Dd2UJxh9 To be clear, the robot didn't appear to be "working," as it was flanked by two photographers intent on capturing its movements as it slowly crossed Valencia Street. This was more of a photo shoot than it was a delivery operation.