Adversarial Attacks against Windows PE Malware Detection: A Survey of the State-of-the-Art

Bio: Antonio Bicchi is a scientist interested in robotics and intelligent machines. After graduating in Pisa and receiving a Ph.D. from the University of Bologna, he spent a few years at the MIT AI Lab of Cambridge before becoming Professor in Robotics at the University of Pisa. In 2009 he founded the Soft Robotics Laboratory at the Italian Institute of Technology in Genoa. Since 2013 he is Adjunct Professor at Arizona State University, Tempe, AZ. He has coordinated many international projects, including four grants from the European Research Council (ERC).

The morals of the driverless cars

There is something different about this car, however. Someone is in the driver's seat, but the car is driving itself. This vehicle is part of Uber's self-driving pilot program and is a fleet of vehicles cruising throughout America. Dazed, the driver, who has barely touched the wheel all day, stares into the empty Arizona desert. The driver freaks out; he instantly fears the worst.

That's what Arizona State University retail store manager and mother to three Sophia Lovasz asked her TikTok followers back in April. In a 15-second video we see a driverless Waymo minivan approach before Lovasz hops in and shows that no one is at the wheel. "Ngl it was trippy at first," reads a caption, as the steering wheel moves on its own. The short clip set to "Lottery (Renegade)" by K Camp racked up 1.9 million views. Whatever hashtag it's known by, this is where the far-off concept of self-driving cars is portrayed as an everyday reality thanks to posts from early adopters. Based on the success of her first post, Lovasz -- or @sosobombs -- continued documenting her experience as an early rider using the Alphabet-owned Waymo One robo-taxi service in the Phoenix, Arizona area.

When an Uber autonomous test car killed pedestrian Elaine Herzberg in Tempe, Arizona, in March 2018, it sent alarm bells around the world of artificial intelligence (AI) and machine learning. Walking her bicycle, Herzberg had strayed on to the road, resulting in a fatal collision with the vehicle. While there were other contributory factors in the accident, the incident highlighted a key flaw in the algorithm powering the car. It was not trained to cope with jay-walkers nor could it recognise whether it was dealing with a bicycle or a pedestrian. Confused, it ultimately failed to default quickly to the safety option of slowing the vehicle and potentially saving Herzberg's life.

Following an online pilot in the fall of 2020 with Maricopa County Community College District, Intel is expanding its AI for Workforce Program to include 18 additional schools in 11 states, including California, New Mexico and Michigan. With the expansion, more than 800,000 students can take part in a curriculum designed by the company, at the end of which they can earn a certificate or associate degree in artificial intelligence. The program includes courses on data collection, computer vision, model training, coding and AI ethics. In addition to designing the curriculum, Intel has provided training and technical advice to the college faculty involved in the program. Dell is also helping with technical and infrastructure expertise.

Waypoint - The official Waymo blog: Why I Ride with Waymo: Sophia 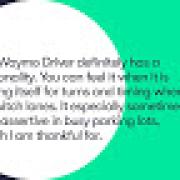 Editor's note: We first heard from Sophia on social media, where she's been sharing fun videos of her Waymo One rides. We reached out to learn more about what intrigued her about Waymo in the first place and how autonomous driving technology has become a part of her everyday life (and sparked a new passion!). Tell us a little bit about yourself! My name is Sophia, and I live with my husband and 3 children in Tempe, Arizona. I work as a campus store manager at Arizona State University and in the entrepreneurship community as a venture mentor.

On March 18, 2018, at around 10 p.m., Elaine Herzberg was wheeling her bicycle across a street in Tempe, Arizona, when she was struck and killed by a self-driving car. Although there was a human operator behind the wheel, an autonomous system--artificial intelligence--was in full control. This incident, like others involving interactions between people and AI technologies, raises a host of ethical and proto-legal questions. What moral obligations did the system's programmers have to prevent their creation from taking a human life? And who was responsible for Herzberg's death? "Artificial intelligence" refers to systems that can be designed to take cues from their environment and, based on those inputs, proceed to solve problems, assess risks, make predictions, and take actions. In the era predating powerful computers and big data, such systems were programmed by humans and followed rules of human invention, but advances in technology have led to the development of new approaches.

The company claims its cloud- and artificial-intelligence-based traffic control system can halve rush-hour times in dense urban areas, reduce annual CO2 emissions by a half-billion tons in places like Phoenix/Maricopa County, and slash transportation budgets by 70 percent. When legacy system suppliers like Siemens offer similar technology with centralized control, it typically requires costly installation of fiber-optic or other wired-network connections, as the latency inherent in cellular communications can't meet stringent standards set by Advance Transportation Controller (ATC), National Electrical Manufacturers Association (NEMA), CalTrans, and others for safety and conflict resolution. Installation cost per intersection roughly equals the cost budgeted for maintaining and repairing today's inductive loops and camera intersections every five years, but the NoTraffic gear allegedly lasts longer and is upgradable over the air. Maricopa County has the greatest number of NoTraffic intersections, and projections indicate equipping all 4,000 signals in the area would save 7.8 centuries of wasted commuting time per year, valued at $1.2 billion in economic impact. The company targets jurisdictions covering 80 percent of the nation's 320,000 traffic signals, noting that converting the entire U.S. traffic system could reduce CO2 by as much as removing 20 million combustion vehicles each year.