A long time ago in an innovation ecosystem far, far away… a recent MIT graduate started his career in a vintage 1970's Massachusetts Route 128 Artificial Intelligence (AI) startup doing speech recognition, re-named Verbex after Exxon acquired the company. Fast forward to AI in 2019, and what stands out most to that grad (me) are two pleasant surprises. The first surprise is the degree to which highly competitive IT businesses have embraced open source AI. Google's TensorFlow has over 120,000 stars on GitHub, which the largest home of open source code communities, and Microsoft acquired GitHub in 2018. Facebook's PyTorch is also quite popular, especially in academic and industrial research communities, with over 25,000 stars on GitHub.

Recent advances in artificial intelligence are encouraging governments and corporations to deploy AI in high-stakes settings including driving cars autonomously, managing the power grid, trading on stock exchanges, and controlling autonomous weapons systems. Such applications require AI methods to be robust to both the known unknowns (those uncertain aspects of the world about which the computer can reason explicitly) and the unknown unknowns (those aspects of the world that are not captured by the system’s models). This article discusses recent progress in AI and then describes eight ideas related to robustness that are being pursued within the AI research community. While these ideas are a start, we need to devote more attention to the challenges of dealing with the known and unknown unknowns. These issues are fascinating, because they touch on the fundamental question of how finite systems can survive and thrive in a complex and dangerous world

Can YOU beat a computer at chess? Interactive tool lets you play against an AI and see exactly what its thinking 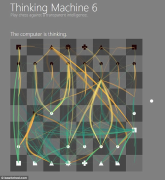 Artificial intelligence has shown what it can do when facing off against humans in ancient board games, with Deep Blue and Alpha Go already proving their worth on the world stage. While computers playing chess is nothing new, a new online version of the ancient game lifts the veil of AI to let players see what the AI is thinking. You make your move and then see the computer comes to life, calculating thousands of possible counter moves – but if you are terrible at chess to begin with, it probably won't help you much. Thinking Machine 6 is the latest in a line of AI-based concept art, with the third version a permanent installation at the Museum of Modern Art in New York. Created by computer scientist and artist Martin Wattenberg and Marek Walczak, the last three versions have been taken online, with contributions from Johanna Kindvall and Fernanda Viégas.

Opportunities and Breakthroughs in Artificial Intelligence

When IBM's deep blue beat Gary Kasparov in chess in 1997, researchers thought it would take computers decades to beat humans at Go: a 2000 year old board game and even as early as last year, researchers thought we were at least 10 years away. But in early 2016, Google's DeepMind, using advances in Deep Learning, beat Lee Sedol the world champion of Go. In addition to games, Deep Learning is opening new business opportunities in various areas which were simply not possible a few years back. Come listen to leaders from Nervana Systems, Natural Selection, Mtell, and Netradyne who will be sharing their personal experiences of starting an AI company, opportunities that exist for starting AI based businesses and lessons learned throughout their career. Alex has a decade of experience in large-scale machine learning and the industrial IoT.