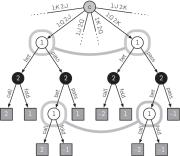 Mirowski cites Turing as author of the paragraph containing this remark. The paragraph appeared in [46], in a chapter with Turing listed as one of three contributors. Which parts of the chapter are the work of which contributor, particularly the introductory material containing this quote, is not made explicit.

Review of One Jump Ahead: Challenging Human Supremacy in Checkers

Tinsley admirably overcomes this obstruction, how Tinsley's sacrifice enables his ultimate defeat, and how vided more than a glimpse of the Tinsley deals with the end of his domination University of Alberta set out to intense process it described. One Jump Ahead was written by the On a sad note, the community He succeeded. Even though One Jump Ahead is human nature. Schaeffer had to unfortunate because the world checkers the human aspects of Schaeffer's journey Finally, Kidder's book, The Soul of a New nearly unbeatable world champion of Schaeffer had to deal with However, One Jump Ahead is We also get to know many of his about and what the consequences of quite different and, in my opinion, friends and rivals, including Asa Long, this success were. We and turns has lessons to be learned was written by an outsider-- one who see these checkers players not just as about human nature.