Nasa has flown a large, remotely piloted predator drone equipped with detect-and-avoid technologies through the national airspace system for the first time without a safety chase plane following it. The space agency says the'milestone' flight over California moves the US closer to normalising unmanned aircraft operations in airspace used by commercial and private pilots. The test used a non-military version of the Air Force's MQ-9 Predator B called Ikhana that is 36 feet (11 meters) long and has a 66-foot (20-meter) wingspan. It paves the way for large remotely-piloted aircraft to be used in all kinds of services, from fighting forest fires to providing emergency search and rescue operations, according to Nasa. The flight took off from Edwards Air Force Base in California and entered controlled air space almost immediately.

Google is ending its controversial'Project Maven' deal with the Pentagon. Google Cloud boss Diane Greene informed employees of the decision during an internal meeting on Friday morning, Gizmodo reported, citing sources close to the situation. The contract, in which the Pentagon used Google's artificial intelligence technologies to analyze drone footage, was set to expire in 2019. Greene told employees that it won't be renewing the contract once it expires. Google is calling off its controversial'Project Maven' program with the Pentagon. 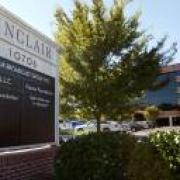 BISMARCK, NORTH DAKOTA – U.S. Secretary of Transportation Elaine Chao on Wednesday announced 10 sites for a test program aimed at increasing the use of unmanned aircraft for projects that range from monitoring crops and oil pipelines in North Dakota to applying mosquito-killing treatments in Florida and package deliveries in Tennessee. President Donald Trump signed a directive last year to establish the "innovation zones" that allow exemptions to some drone regulations, such as flying over people, nighttime flights and flights where the aircraft can't be seen by the operator. States, communities and tribes selected to participate would devise their own trial programs in partnership with government and industry drone users. "Data gathered from these pilot projects will form the basis of a new regulatory framework to safely integrate drones into our national airspace," Chao said in a statement. Chao, who called the rapidly developing drone industry the biggest development since the jet age, said about 150 applications were received.

Military drones that can fly for more than 40 hours and stream footage of US cities will replace police helicopters by 2025, experts claim. Multiple defence companies are now racing to build unmanned aircraft that will be allowed to fly in US airspace - which is incredibly tightly controlled. Leading the race is a long-winged craft called MQ-9B, created by Californian-based company General Atomics. This could allow law enforcement to stream video of cities from 2,000 feet (50 metres) high using cameras that are powerful enough to pick out individual faces from a crowd. Californian-based company General Atomics is investing heaving in a long-winged craft called MQ-9B and are aiming to receive FAA certification to fly in 2025.

The Air Force Research Laboratory (AFRL) recently tested autonomously flying F-16 fighter jets in collaboration with Lockheed Martin. The tests could mark a big leap for military drone technology as these jets could be used in the future for large scale air-to-ground strikes. "This demonstration is an important milestone in AFRL's maturation of technologies needed to integrate manned and unmanned aircraft in a strike package. We've not only shown how an Unmanned Combat Air Vehicle can perform its mission when things go as planned, but also how it will react and adapt to unforeseen obstacles along the way," Capt. Andrew Petry, AFRL autonomous flight operations engineer, said in a press release issued Monday by Lockheed Martin.

Aeronautics researchers at MIT have developed a manned-to-unmanned aircraft guidance system that allows a pilot in one plane to guide another unmanned airplane by speaking commands in English. In a flight test, the pilotless vehicle, called a UAV (unmanned aerial vehicle), responded to sudden changes in plan and avoided unexpected threats en route to its destination, in real time. "The system allows the pilot to interface with the UAV at a high level--not just'turn right, turn left' but'fly to this region and perform this task,'" said Mario Valenti, a flight controls engineer for Boeing who is on leave to pursue a Ph.D. in electrical engineering and computer science at MIT. "The pilot essentially treats the UAV as a wingman," said Valenti, comparing the UAV to a companion pilot in a fighter-plane squadron. Tom Schouwenaars, a Ph.D. candidate in aeronautics and astronautics, and Valenti are principal researchers on the guidance system, which is part of the capstone demonstration of the Software Enabled Control (SEC) program. Professors Eric Feron and Jonathan How of the Department of Aeronautics and Astronautics (aero/astro) are among the principal investigators on the SEC program.

There are all kinds of creative ways of dealing with rogue drones: Radio jamming. None of these are really designed to handle military drones, however, and large, fast-moving UAVs are still a potential threat, especially if more than one is coming at you at once. It's no surprise that the U.S. Army has been developing solutions for this potential threat-- we're not sure what they're working on now, but as of late 2013, Raytheon was successfully testing a long range, high power directed microwave weapon capable of taking out swarms of drones in milliseconds. The Phaser is essentially a high powered microwave (HPM) cannon that runs on a diesel engine. Exactly how powerful this thing is (and what its range is) is still classified, but we do know that it can be tuned to either "disrupt" or "damage," where for most drones, "damage" seems to be synonymous with "destroy."

It looks like a Star Trek Bird of Prey, and acts like a drone that terrorists cannot escape: A new military aircraft that's powered by the sun and can conduct missions without landing for 45 days. Airbus Defence and Space calls the new drone the High Altitude Pseudo Satellite (HAPS), but it's been dubbed the Zephyr. It has satellite-type capabilities like extreme surveillance-- but is on demand with the flexibility and versatility of an unmanned aircraft. Unlike a satellite, the Zephyr can be landed, modified with alternative tech, and quickly re-launched to provide different capabilities as required. The Zephyr could fly without landing to provide the military with non-stop high- resolution imagery for a remarkable month and a half, and it could give teams accuracy down to 6-inch resolution.