The dating app Bumble has disabled its politics filter after it was supposedly used to reveal the identities of Capitol rioters, Mashable has reported. Bumble support posted on Twitter that it "temporarily removed our politics filter to prevent misuse," adding that it "prohibits any content that promotes terrorism or racial hatred." Bumble has promised in another tweet that it will "be reinstated in the future." It also stated that it has removed users confirmed as participants in the US Capitol attack. We've temporarily removed our politics filter to prevent misuse.

A Los Angeles man admitted in federal court Thursday that he flew a drone that struck a Los Angeles Police Department helicopter that was responding to a crime scene in Hollywood. Andrew Rene Hernandez, 22, made the admission in pleading guilty to one count of unsafe operation of an unmanned aircraft, a misdemeanor. A spokesman for the U.S. attorney's office in Los Angeles said Hernandez is believed to be the first person in the country to be convicted of that offense, which carries a punishment of up to one year in prison. In his plea agreement, Hernandez admitted that he "recklessly interfered with and disrupted" the operation of the LAPD helicopter, which was responding to a burglary of a pharmacy, and that his actions "posed an imminent safety hazard" to the chopper's occupants. Reached by phone Thursday, Hernandez declined to comment.

Shortly after Trump supporters stormed the Capitol last week, the hunt was on to find those who participated. It wasn't that difficult, as these insurrectionists refused to wear masks in the middle of a pandemic, even if it meant being filmed breaking the law (or being livestreamed by one of their own). While the FBI seemingly failed to see the Capitol riot coming, they have set up a tip line for anyone who had information about participants. This led to people scouring the internet in attempt to identity these domestic terrorists. On January 7, the day after the riot, Foreign Policy for America NextGen Initiative Co-Chair Alia Awadallah noticed an uptick of MAGA-lovers on dating apps. 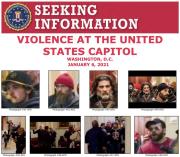 The FBI is seeking information on a half-dozen men suspected of assaulting federal officers Jan. 6 -- a pack that may include the alleged killer of Capitol Police Officer Brian Sicknick. A poster of the top suspects was sent out late Sunday night in a social media bulletin. The murder of a federal officer carries the death penalty. "Yes," Frank Figliuzzi, the FBI's former assistant director for counterintelligence, said when asked by the Herald Monday if one of those men shown could have killed Officer Sicknick. "The FBI is using facial recognition, surveillance cameras, geo-location of cell phones and more to find this guy or gal," Figliuzzi said.

The Business Rules the Trump Administration Is Racing to Finish

Mr. Trump signed an executive order on Tuesday banning transactions with eight Chinese software applications, including Alipay. It was the latest escalation of the president's economic war with China. Details and the start of the ban will fall to Mr. Biden, who could decide not to follow through on the idea. Separately, the Trump administration has also banned the import of some cotton from the Xinjiang region, where China has detained vast numbers of people who are members of ethnic minorities and forced them to work in fields and factories. In another move, the administration prohibited several Chinese companies, including the chip maker SMIC and the drone maker DJI, from buying American products.

They took our Capitol, stormed the halls, pilfered our documents, and shattered the norms of our democracy. The lasting damage from Wednesday's attack will not come from the mob itself, but from how we respond. Right now, a growing chorus is demanding we use facial recognition, cellphone tower data, and every manner of invasive surveillance to punish the mob. In the days since the attack, the airwaves have been full of former law enforcement officials claiming that surveillance is the answer, such retired FBI special agents Danny Coulson and Doug Kouns. Even many who are normally critical of policing have jumped on the surveillance bandwagon in the desire to find justice.

In 1964, the Civil Rights Act barred the humans who made hiring decisions from discriminating on the basis of sex or race. Now, software often contributes to those hiring decisions, helping managers screen résumés or interpret video interviews. That worries some tech experts and civil rights groups, who cite evidence that algorithms can replicate or magnify biases shown by people. In 2018, Reuters reported that Amazon scrapped a tool that filtered résumés based on past hiring patterns because it discriminated against women. Legislation proposed in the New York City Council seeks to update hiring discrimination rules for the age of algorithms.

Gov. Charlie Baker was flanked by public safety officials, Lt. Gov. Karyn Polito and key lawmakers on Thursday afternoon for the ceremonial signing of landmark police reform bill passed by the Legislature last month. The legislation created the state's first-ever licensing system for police officers, to be overseen by a civilian-led commission. The new law is the culmination of efforts to increase transparency and accountability in law enforcement spurred the high-profile police killings of Breonna Taylor, George Floyd and others. The new law also institutes use-of-force standards in policing and places strict limits on so-called "no-knock warrants," requires a warrant for using facial recognition technology under most circumstances and begins to claw back qualified immunity protections for officers. BOSTON, JAN. 7, 2021 -- Senate President Karen Spilka and House Speaker Ronald Mariano chatted before a bill-signing ceremony for the policing reform law got underway at the State House.

Can the Government Regulate Deepfakes?

Last month, the British television network Channel 4 broadcast an "alternative Christmas address" by Queen Elizabeth II, in which the 94-year-old monarch was shown cracking jokes and performing a dance popular on TikTok. Of course, it wasn't real: The video was produced as a warning about deepfakes--apparently real images or videos that show people doing or saying things they never did or said. If an image of a person can be found, new technologies using artificial intelligence and machine learning now make it possible to show that person doing almost anything at all. The dangers of the technology are clear: A high-school teacher could be shown in a compromising situation with a student, a neighbor could be depicted as a terrorist. Can deepfakes, as such, be prohibited under American law?

The new approach, replacing stringent protections that currently bar practically all home-delivery options, goes into effect in two months, but some requirements are likely to take years to implement. The detailed regulations, which total more than 700 pages and parts of which had been in the works since the Obama administration, also aim to address concerns related to law enforcement, national security and privacy protection. "They get us closer to the day when we will more routinely see drone operations such as the delivery of packages," FAA chief Steve Dickson said in a written statement accompanying the rules. Mr. Dickson has told colleagues he intends to stay on under the Biden administration, according to people involved in the conversations, to fill out the remainder of his five-year term ending in 2024. The rules are unlikely to be affected by other personnel changes.